I'm running two circuits outside to other side of yard. I don't have much experience pulling wire so I wanted to make sure I'm doing it right. I have stranded and solid 10awg. I purchased both not sure which to use. I figured my new construction house is all EMT with solid wire, I will use solid to stay consistent.

The solid wire is much stiffer, so I purchased the wire lube to help pull it through and watched some videos about trying pull string in multiple places and electrical taping it.

I will have about a 40ft run of EMT in the basement and then a 60ft run of PVC outside. The PVC will have the LB coming put of house, two 90 deg sweeps (coming out of house, and going up to receptacle), and two 45 deg bends.

I will most likely be doing this myself, so can I pull each wire individually? It will be two circuits, so 5 wires total, (2 hot, 2 neutral, 1 ground).

I purchased a 500ft role, and plan on taping each end to color code. So I was going to pre-cut 5 wires and mark them and pull starting at the junction behind the LB and through PVC, then feed the rest the opposite way through the EMT, basically piecing the EMT as I feed it.

Is this a good idea? Also, can I pull one wire at a time through PVC to make it easier? Or is there best practices to follow to reduce nicks in wires.

Finally, can I pull a 6th wire through and leave it unused to possibly be used in future for a 220 volt with neutral.

This is for a pool circuit and general use receptacle. As of right now I don't need 220 because it's an Intex storable pool. But later on when upgrading the pool pump or heater, may need a 220.

EMT and other fixed metal conduit works as a grounding path, so you only need ground wire where the conduit is otherwise. Green, green/yellow or bare is allowed for ground wire. You don't need a ground wire per circuit, only per conduit, but it must be large enough for the largest circuit present. If bare, it must be copper outdoors.

You join a ground wire to EMT by getting a #10-32 screw and fitting it in the pre-threaded hole in the junction box. Do not use a sheet metal screw.

Conduit outdoors in conduit is outdoors. It's pretty much a foregone conclusion that your conduit will fill with water at times no matter how much you try to seal it... that's why you use THWN wire. It's designed to soak.

I have no earthly idea why someone would use solid wire in conduit, perhaps because they were buying (cheaper?) receptacles and switches not listed for stranded wire, or because they were a Romex Kaiser**. It's not worth "fixing", but I wouldn't do any more of it. It's fine for them to mix, just make sure your devices are listed to take stranded wire, and notably backstabs are not, but those are unreliable in any case.

Stranded wire costs about 5% more here. After your first time wrestling 6 solid wires and a GFCI into a 22cu.in. box, you won't mind paying 5% more.

You have a tough pull due to the four bends, so gear up for a big one. THWN-2 is already pretty slick and lube won't be worth the unbelievable mess IMO.

The main way to prevent damage is first to thoroughly de-burr, and second prevent kinking, by watching the wires as they enter.

You cannot splice inside the conduit body. Out of the question.*

Pulling one wire at a time isn't better, it's worse. The big hank of wires will mutually help each other as well as provide added strength, whereas pulled individually the existing wires will drag on the new. Don't tape them mid-run, they need to slide a bit to go around corners.

Beware of NEC 225.30, which generally prohibits running two similar circuits to a building. So having two unswitched 120VAC circuits may be disallowed. However 225.30(D) considers them dissimilar if they are switched, or a different voltage (240V). So the quickest way to clear 225.30 is put one of the circuits on a switch for some reason. Nowhere in the code does it require you to use the switch.

Tape is the key to marking when you don't have 8 colors of wire.

Don't distinguish wires unnecessarily: for instance the two hots going to a 240V heater or 120/240 dryer don't really need to be distinguished from each other.

In your case you need to distinguish two hots from each other, and two neutrals from each other (why? Because you might put a GFCI on one), and potentially a third spare hot.

You can put any tape color on any wire color, but it doesn't always do what you want: 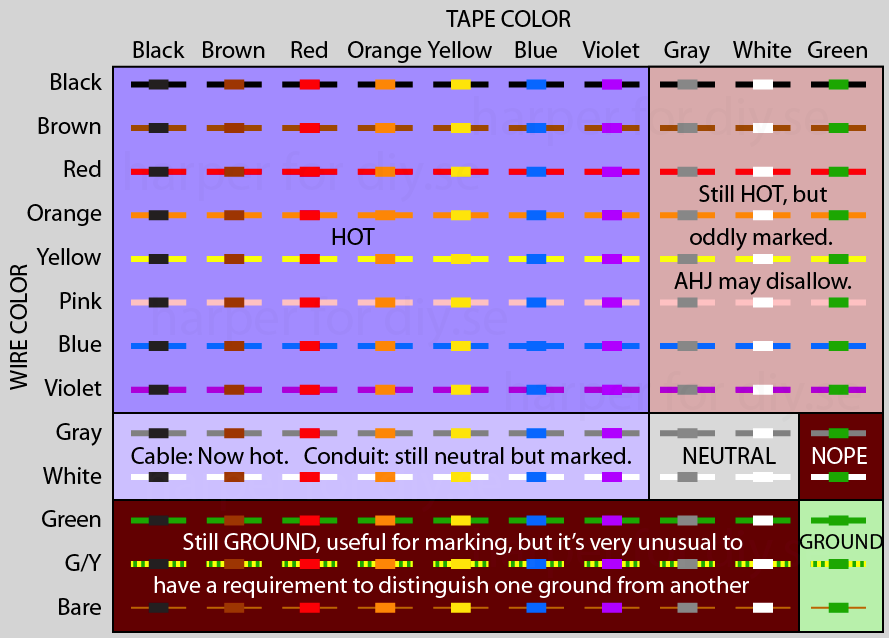 Same-color tape is a little subtle, but is useful for marking. With colored tape it usually doesn't quite match the color or finish of the wire, and you can feel it.

In cable, it's easy to tell which wires are partner to a white, since they emerge from the same cable. This can drive you crazy in conduit with 4 whites coming out of a conduit. In conduit, remarking whites to a hot is disallowed (in most cases) but this cuts both ways: you can use the colored tape to distinguish different wires.

* To be pedantic about it, Code says any box/body is only a conduit body until you splice in it, then, it's a junction box... and must use junction box fill rules. This makes them way too small to splice in, in practical application. Even if the conduit body is wildly oversized for the wire, making the splice strangles the remaining capacity of the conduit, defeating the purpose "room for expansion" to oversize.

Now to be super, duper, duper pedantic, literally NEC says conduit bodies use conduit rules, but they have anything but thru wires, they are still conduit bodies but have to use special fill rules that are identical to the junction-box fill rules. And then, junction boxes use junction box rules, unless they have nothing but thru wires, then they are still junction boxes but use special rules that are identical to the conduit body rules.

** you can tell when conduit work was done by someone used to working in Romex, because they stay as close to Romex practice as possible, e.g. choose only black, white and red for the wires, and occasionally use a white for a switch loop. The old WWI German flag colors. Add green and you have the Pan-Arab colors LOL.

5
Do separate pieces of EMT conduit qualify as "pull points"?
3
Transition PVC outdoor conduit to EMT
1
Code compliance - how do I pass EMT conduit through an interior wall?
1
EMT Conduit Capacity with Mixed Gauge
3
Adding wires to EMT conduit to add circuits
1
Acceptable to add knockout to PVC conduit body?
0
How do I connect underground PVC pipe holding wire to rigid conduit?
0
Can I tape rather than glue buried PVC conduit to make pulling wires easier?
0
Conduit fill for (slotted) wire ducts?
2
Is it ok to run THHN from a main panel, through PVC conduit in the attic, then transitioning to EMT into rooms?