Figuring out the correct way to connect a duct fan (europe)

I found a new old duct fan in a garage sale, the seller said he bought it around 10 years ago, never used it. Anyways, it was in pristine condition inside its plastic wrap but came without a box and with a tiny instruction leaflet, the only markings I found as to what it is is just stylized "CATA" written on the leaflet.

So that's what's confusing me. There is no black wire here and while N would probably be neutral, I have no clue as to what the L or SL are. I think the L should be the hot wire (being brown) but I can't be sure.

Anybody got any insight into this?

I found this diagram while looking for "CATA" duct fans, it also has the N L and SL markings and I think sticking the blue wire in N and brown into both L and SL should make it work?

Still strange though, if they wanted the hot wire in SL for a switch, why also have it also permanently connected to the L? Might have something to do with the "TIMER" potentiometer on its backside.. 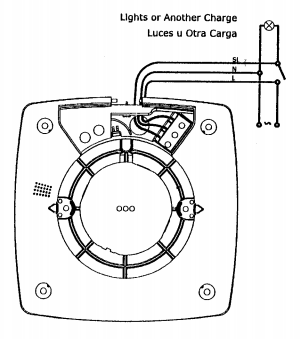 L = line, SL = switched line. It may be that the fan can be configured to run for a number of minutes after the light is turned off. It's probably a bathroom fan.

2
Why is the light always on after replacing the light fitting?
1
How do I rewire this ceiling fan?
0
Confused by ~115VAC 5-wire cabling to UK thermostat
1
Connecting electric hob in Germany
0
Clarification on NEC requirements for Fixtures ( Danger )
0
Fan with Remote issue
2
Is it normal for a washing machine to shock you without grounding?
1
four way switch to three way for vent fan