This is an As-built drawing of how my home was converted from 120vac to 240vac The house now has the Neutral moved in the house and used as L2 power source Each circuit had the neutral moved from the Neutral bar and attached to a breaker on the L2 side. Now the circuit has L1 and L2 load making 240vac. Ground wire is connected to the outlets and lights so we have to be careful not to get between the Ground and L1 or L2 load wire. It has been working for 15 years now.

Note we are not in USA and in an isolated area with no inspection and rules. Just wanting to check, knowing the safety concern with the ground and possibility of electrical shock what other concerns might be known. 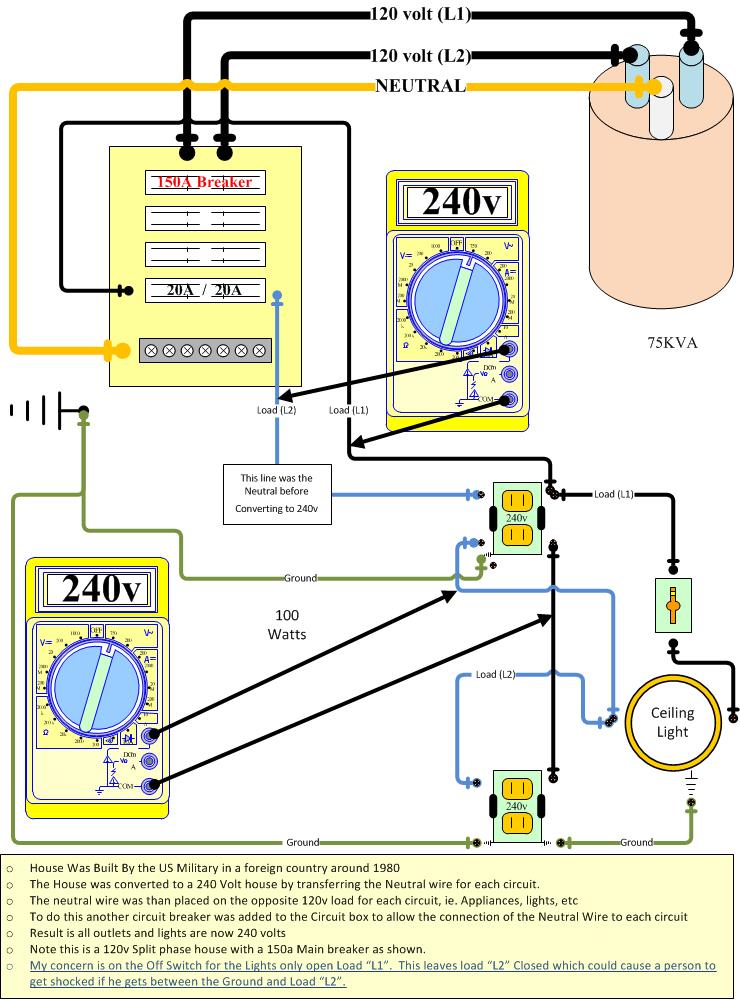 You should change the light switches to double pole switches that cut both halves of the power supply. These are commonly available (how hard they are to get where you are, I don't know.)

The breaker handles for each pair of circuits (that are now "one") should be "tied" if the breakers are not themselves double breakers (which is what I think you've described) - preferably they would all be replaced with double-pole breakers which do not need a tie. While you don't have local codes/inspections, this would be safest for you. This requires the pair of breakers to be located side-by side, not opposite as you have drawn.

You should also change the outlets (evidently still US-120VAC style) to the local common/standard 240VAC style, if only to prevent mishaps with 120VAC equipment being plugged in.

I think I've crossed paths with this problem before. In the Philippines they are transitioning from North American split-phase to Euro style single-phase. Sometimes they stop at a bastard halfway position where they sever the neutral wire, but fail to move the ground to one end or the other. This is weird and not very safe.

The idea of putting breakers on neutral is awesome, however - a good thing to retain. Most countries "run naked" and have no protection if two circuits try to share a neutral.

There are a lot of electrical shock problems with this arrangement. There's no protection at all for ground faults - that's the worst part. Often the house grounds aren't even wired, but if they are, they are "in the middle" halfway between the hots. The problem is there's no way for ground-faults to return to source. They go to earth, then they go through high-resistance dirt back to the ground wire on the transformer pole, if it's even grounded.

You could fix at least that problem by burying some #4 ground wire from your ground rods out to the ground rod on the transformer pole. That would at least assure that a ground fault trips the breaker.

However realistically your best bet is switch to GFCI breakers.

Well, your better bet is to get your own transformer, and ground your side of the transformer properly.

2
Upgrading 2 breakers to AFCI, always trips
0
Dangers of bootleg ground and GFCI?
1
Should I isolate the ground and neutral in the 30A safety switch box or keep them bonded until the sub panel it is feeding (as service disconnect)?
1
Main Panel with separated neutral and ground
2
Three wire vs four wire feed remote sub panel
0
Ground wires: Do I have this right?
0
feeding both sides of load center from 120vac backup source
2
Connecting 240 volt generator to Main Panel
1
backup electrical feed to main panel from inverter's GFCI outlet without ground?
0
Is it normal to not have an OL between ground and neutral?