How to tell if my new, unfurnished apartment has bed bugs?

I just signed the lease on a new apartment in Williamsburg, Brooklyn. I did so after looking up the address and seeing that it had been listed twice in the bed bug registry. In 2009, a tenant said a few units had been infested. In August 2010, a tenant said bed bugs had been seen in at least one of the top floor apartments (mine is on fl. 5 of 6). Nothing has been said about the building since.

I have not yet moved in, and I don't have to move in for several weeks -- maybe even a month. Currently, the apartment is empty of all furnishings except a refrigerator.

What can I do during the next few weeks to ensure the apartment is not infested?

Bed bugs are hard to see. They get in small cracks (e.g. between the flooring and wall) and can survive for months. Finding them by sight will be next to impossible. But you could have a service inspect the place before you move in. I think some use trained dogs that can smell them.

That said, no matter how careful you are, bedbugs can migrate through small cracks, vents, a shared laundry facility, etc. So even if you don't have any before moving in, it's possible they will migrate to your unit once there's a food source (people).

They make kits that attract the bed bugs and trap them in a container so you can inspect it for their presence. 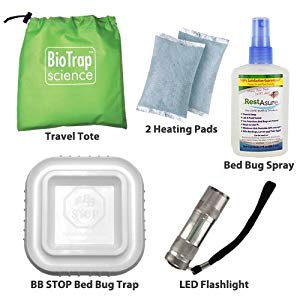 I have never used one of these so I cannot vouch for their accuary. However, I would not substitute this for a professional opinion in the event it is negative.

I will be trying this, or several of these DIY bed bug dry ice traps:

For more specific instructions on how to build the device, see here:

Any suggestions on how to make this device more effective would be appreciated!

Not the answer you're looking for? Browse other questions tagged pest-control rental new-home or ask your own question.

1
Can I prevent bed bugs?

13
How do I locate where bed bugs hide?
1
Can I prevent bed bugs?
1
Eliminate bed bugs from flat
1
Mystery constant, fast, and barely audible vibration in private home
0
Are these signs of bed bugs?
3
How to get rid of fleas in house without animals nor carpets?
0
How can I prevent bugs from entering my apartment through air vents?