2 months ago I moved into a house from 1959 (1 220V phase and 1 neutral coming in). I noticed on the 2nd floor bathroom that there was stray voltage on the faucet (-+ 30V). No socket outlets in the house have a ground pin. When I connect a power bar (which has internal grounding), I notice a stray voltage on its sockets too.

I installed an earthing rod (260cm / 8,5feet in the ground). I tested it while connecting a light bulb (40W) between a hot wire and the ground, and it bright up. Next I connected the earth cable to the breaker panels earth bar. There were already 2 ground cables from somewhere in the house connected to this bar, and I did not remove them.

I figured this would solve the problem of my faucet, but it didn't. Whenever I would stand on the bathroom floor and touch the faucet I could feel the stray voltage.

I then connected a new ground cable from the breaker panel's earth bar to the faucet. Using a volt meter I got these 3 readouts: 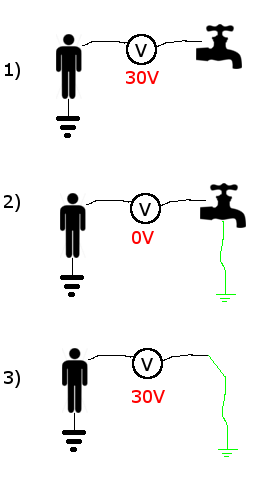 1) I'm standing on the bathroom floor, and hold a Volt Meter's pin1 in my left hand, while I hold pin2 against the faucet

2) Same situation, only this time I connected the new ground cable to the faucet

3) This time I hold pin2 directly against the ground cable.

I have no idea what's going on. How can my ground cable have a voltage of 30V, when I'm measuring between the bathroom floor and the ground cable (20m / 65feet) to the earth rod?

Update 7 months later: This bathroom has been fully renovated now. I have a suspicion about what was going on initially. Under my feet, inside the flooring there was a metal tube which held insulated electricity wires. At the endpoint of that metal tube was a light switch 1 floor underneath the bathroom, and I think it probably was a faulty device leaking current (a bad light switch can act as a sort of capacitor I think). (= fault 1) The metal tube must have been connected in some way to the light switch. (= fault 2) By standing directly above this metal tube I put myself at 30V potential, and while touching the bath faucet (which I believe is a natural ground in any house) I felt this.

One of your appliances has a ground fault

It often comes as a shock to people, but sometimes their appliances have a defect. Its internal electrical insulation isn't up to snuff, and it is leaking current (typically from the "hot" wire as neutral is usually harmless). If the leak is small, it may self-limit current to feelable but non-lethal amounts. Such leakage tends to get worse, so what tickles today could kill tomorrow.

Essentially, the insulation failure and the human become a resistor ladder as both are resistors and both are in series. So the amount of the insulation leakage, and the quality of skin contact, determine resistance, and thus the amount of current. Do it again with wet hands and now your resistance is much lower and you're dead.

As such, any tickle should be considered extremely dangerous and repaired with extreme prejudice.

DVMs (Digital Voltmeters) are not 100% reliable. Their resistance is so high (in theory they should read a fault as full line voltage) that they often misread ordinary capacitive coupling as relevant voltage.

Don't use yourself as a voltmeter. Hunt down a testing device that successfully indicates the fault, e.g. a non-contact voltage tester, mechanical meter voltmeter, neon light tester, etc.

GFCI/RCD is a starting point

Hunt it down, one appliance at a time

Now you need to move through each of your loads, and see which load or device is causing this. You can start by shutting off one circuit breaker at a time, and see which one extinguishes the effect.

Once that's the case, note which devices are offline with that breaker off, and move through them one at a time.

Very rarely, it can be something totally out of left field. I have no idea how to advise patrolling for that.

I had this problem IT was caused by an electrician that installed the neutral wire without removing the insulation on the wire. He tightened the connection very tight just making a resistant connection. I removed the insulation, reinstalled and solved the problem