What is the purpose of the whole house trap in my house? How could sewage reach it if no pluming drains there? How to prevent the back-up in the future?

I recently bought a house. The house was built in 1968, and is located in a large town in western Ohio. The house is connected to the municipal sewer system. Behind the house there is a creek, and the storm water is drained to that creek (I've put up a fence and the city marked the storm water line from a grate in front of my house, through my yard to the creek). The plumbing of the house looks original, copper supply pipes and copper and iron drain pipes. Gutters drain to the yard, not to drain points.

The basement has a washing machine and sink, with not other plumbing points. There is an open floor drain (with water in the drain, so I assume there's a P-trap there) next to the furnace/AC/WH (the new furnace and the AC drain there), as well as a cleanout (capped with a plastic screw-on cap) and a whole house trap (that was originally covered with a non air-tight steel plate, and is now covered with a glued on acrylic panel as part of a Radon reduction system).

Here's the whole house trap and cleanout (now, after clearing the clogs): 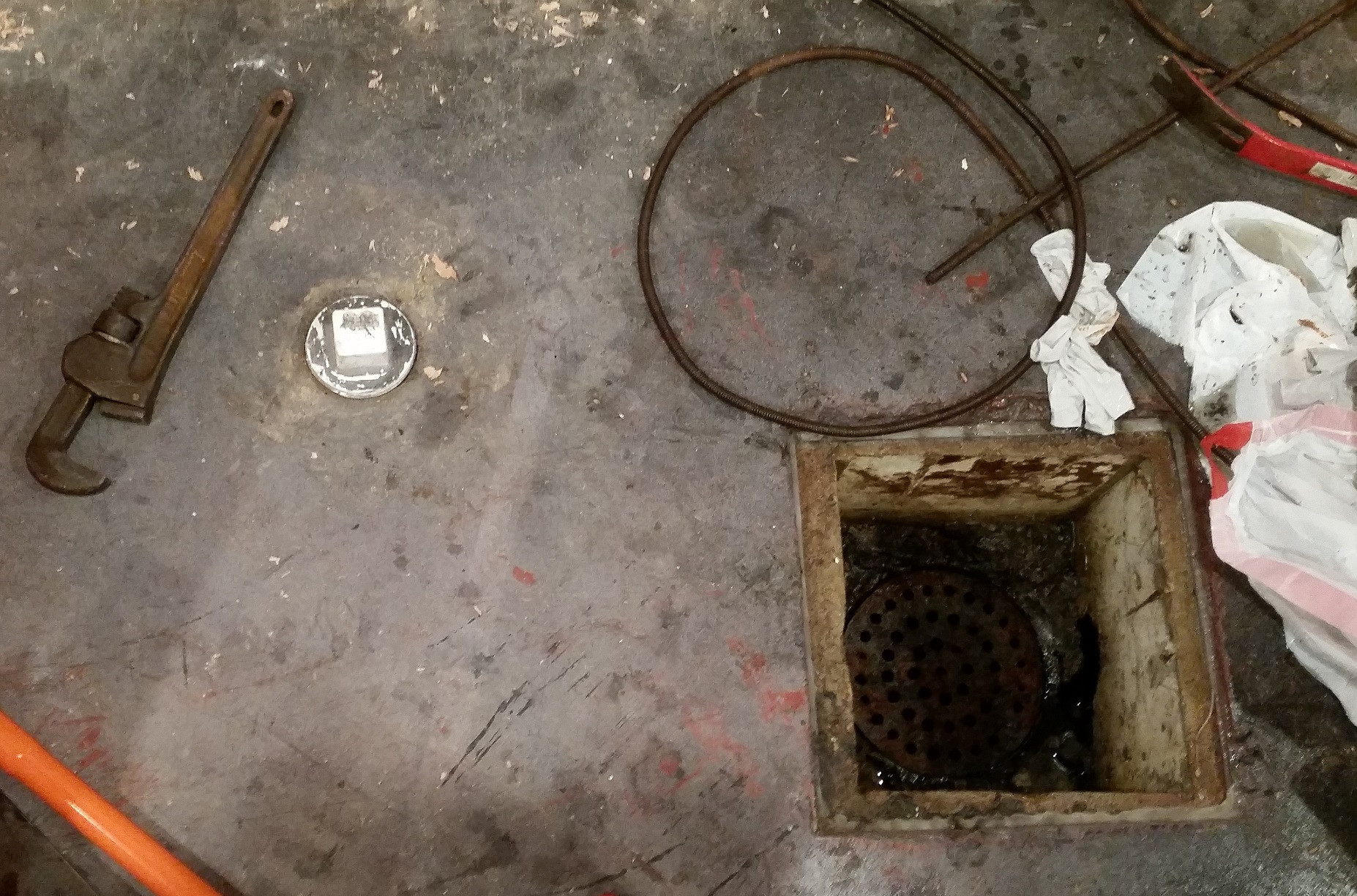 During the last few days and nights, we had quite a bit of rain, and yesterday evening I have discovered sewage back up around the furnace floor drain. The spill contained "organic matter", so it's defiantly sanitary sewage.

I opened the cleanout next and it was clear. Flushing toilets and opening faucets/showers throughout the house all drained well through the cleanout, without affecting the water in the whole house trap.

Using a wet/dry vac I sucked up the water standing in the whole house trap, and it has seemed to dislodge the clog, allowing water to drain properly through the trap (water poured into the trap drain through the cleanout pipe). Looking at the content of the vac didn't show anything special (just organic matter).

After the trap was clear I used a hose to flush out the three pipes leading into the trap. I flushed from the trap, since I didn't have a clue as to where these pipes lead. Two of the pipes contained organic matter and toilet paper that took a while to fully flush (flushed multiple time with the hose), but at the end all three pipes drained clear water after hosing them for about 10 seconds.

Here's a closeup on the trap: 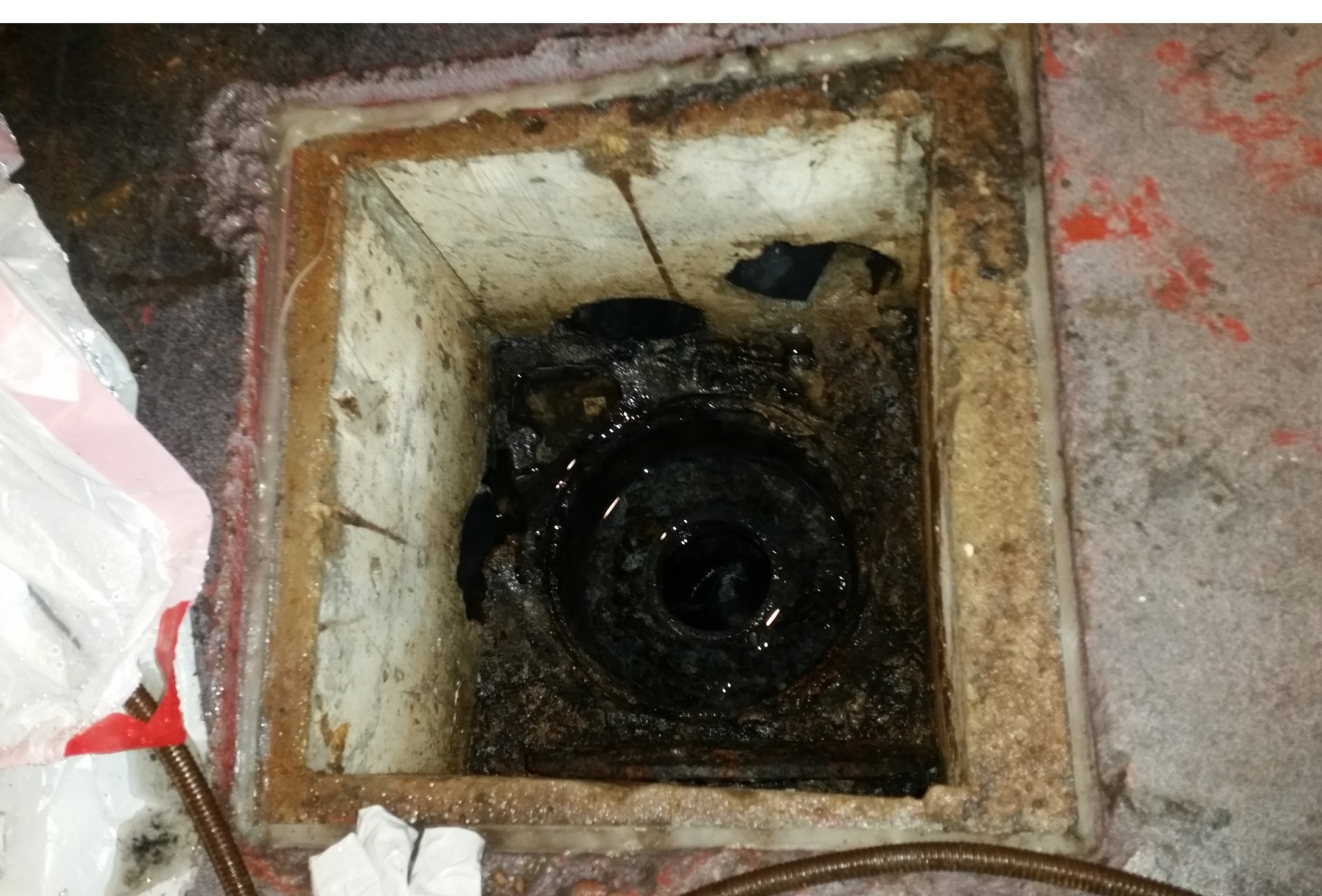 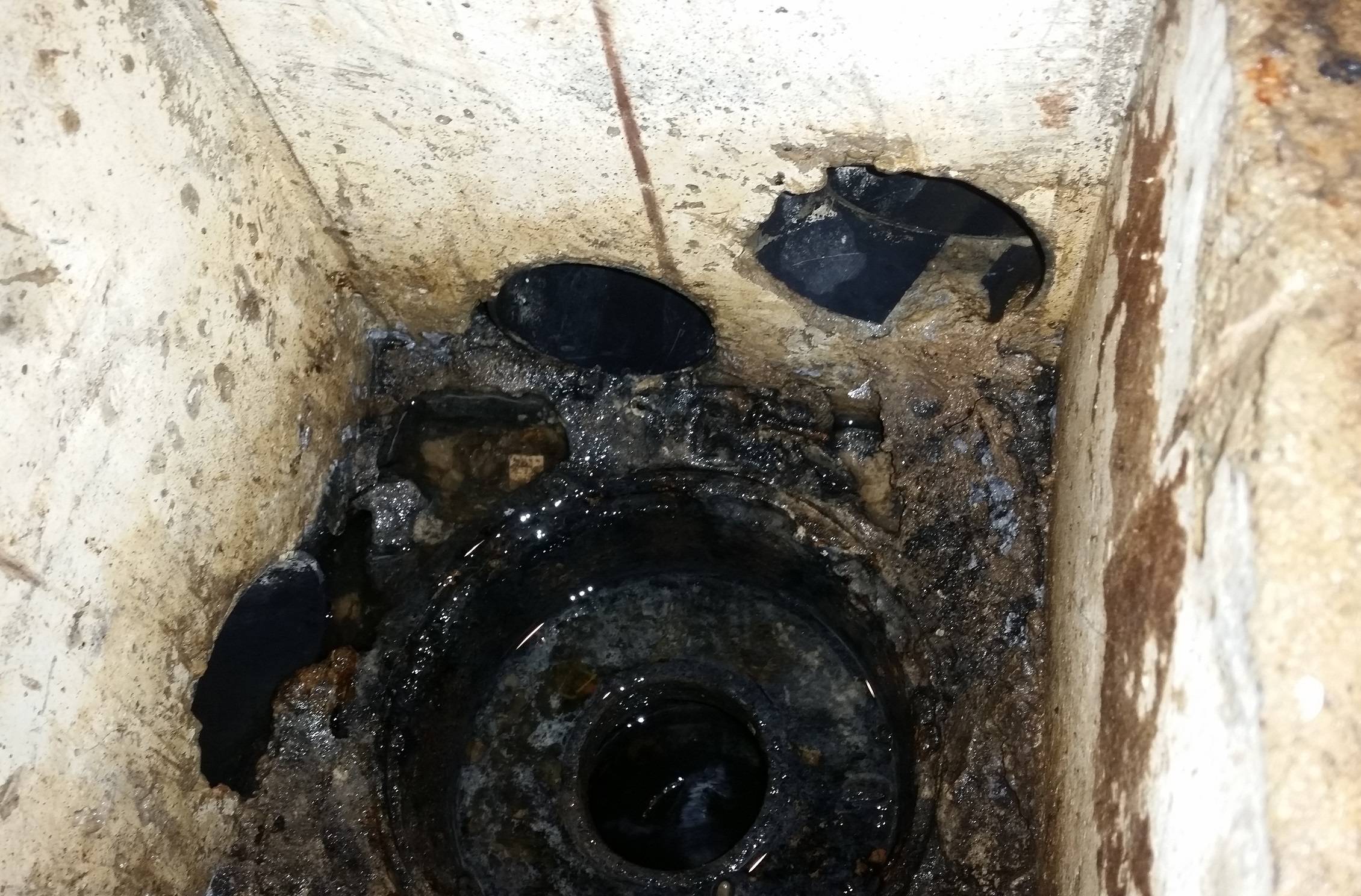 What is going on with the plumbing in the house? What do the pipes in the whole house trap do? How would organic matter and toilet paper reach those pipes? All toilets seem to flush through the cleanout pipe, and there is a steel grate blocking the trap's entrance (so waste shouldn't travel from the cleanout pipe to the trap, since it should be stopped by the grate). How to prevent the back-up from occurring in the future?

I realize that this response is about 3.5 years after your original post was published, but I thought I would add my knowledge/experience to possibly help the next guy.

I to live in Ohio (southwest) in a house built in 1963, and I believe I have the same set up as you. I also just had a backup after a hard rain.

All of the following information is specific to my house, but I believe it will be applicable to you. The pipes coming into the pit are from the foundation drainage system around the house. The foundation drainage system directs rain water to this pit. The drain at the bottom of the pit connects directly to the main sewer line of the house. The main sewer line of the house is connected to the city sewer.

In a unperfect world your house main sewer line could be partially plugged with roots (this was my problem). When your house main sewer line is partially clogged and there is a hard rain, the discharge of the pipe simply cannot keep up with the new rain water coming in. This is what caused my back up. Being that the pit drain is connected to the house sewer line, that explains how organic matter makes its way into the pit during a backup (rain water and sewer using the same pipe).

At my house, I would not call the drain at the bottom of the pit a “whole house trap”. Rather just a trap connecting foundation rain water system to the sewer line.

I have the same drain in your photo. There is a ball in my drain. The ball is supposed to act as a one-way check valve. I was able to snake my drain out by pushing the ball to the side and by using a very small snake. I should add, the ball in my drain was stuck and needed to be forcibly dislodged before I could snake. Before I snaked my pit drain I used to have standing water as well. After dislodging the ball and snaking, I no longer have standing water in the pit.

Hopes this helps someone understand an old house system in the future. Thanks

0
How can we repair cracked and broken concrete around a sewer stack in the basement floor?
1
Mysterious drain going into sewer cleanup
1
Sewer smell after installing garbage disposal
1
Toilet on septic system won't flush after heavy rain
2
How can I convert this cast-iron cleanout to a proper air-gapped drain?
3
Would this be a proper way to run drain line for basement sink?
2
Drain line attaches after sewer trap