I have a AEG pro intensiv favorit. It flooded my kitchen and the water is gone but the alarm doesn't stop. I tried to unplug it and push the buttons for more than 10 seconds. The motor is still sucking, but there is no water left. When I pour in new water, it is sucked away immediately. I don't know the cause of the original flooding and how to reset the machine.

How could I stop the alarm and fix my dishwasher? According to the manual it is clearly the anti-flood protection (three consecutive beeps). The manual doesn't mention how to solve it.

Apparently the solution was not that hard. I found the manual here. The manual perfectly describes my problem on page 14 but unfortunately doesn't provide a solution.

They forgot to mention the very annoying beep that beeps on the same rhythm as the indicator.

On other fora I found a suggestion to tilt the whole machine forwards. Mine was built-in so this was rather difficult. Instead I decided to remove the front plate in the bottom. This plate is accessible without removing the machine itself. As expected, there was water underneath the main compartment. I read similar things before and I actually hoped that it would just dry up. However, the water was about 1 cm deep and I removed more than a liter in total. This won't dry up within a week.

Removing the water was not easy but it is doable with a mop/cloth. Pay attention since there are quite a few wires as well. I also accidentally loosened a tube. I didn't know where to attach this, but in the end it was just the overflow tube. It is not supposed to be attached anywhere and is probably the cause of the water in the base.

The 'flood-detector' itself is not a very complicated device. It is similar in design to the float often found in toilets. When there is water in the base, this will lift and activate the alarm and the pump.

Once the water was cleared up and the float was lowered, the alarm was shut of and the machine worked again (I did all this with the machine unplugged so I only noticed afterwards).

For those interested, I've also included a picture of the base. The white thing in the middle is the float. The tube coming in from the top right is the overflow tube. It is attached on the top, but its end is not connected to anything. 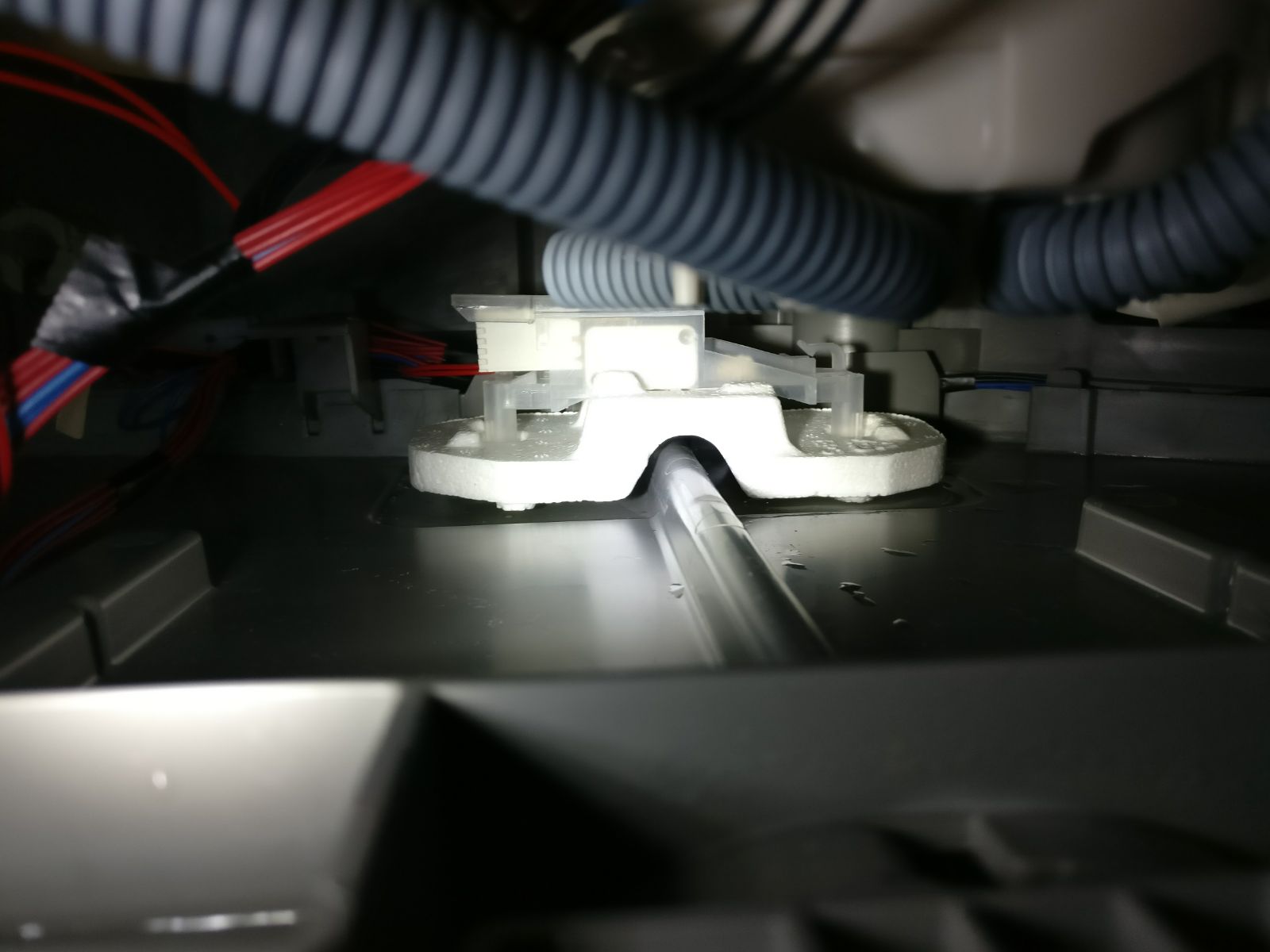 I don't know what eventually caused the flood in the first place. Probably something was clogged. This in turn caused the overflow to dump the water in the base. My problems were solved after cleaning the filter and removing the water from the base.

Not the answer you're looking for? Browse other questions tagged repair dishwasher or ask your own question.