Warning: Lots of setup ahead...

We have lived in our house for almost 3 years now. The house was built in a newer addition approximately 25 years ago. The grounds is mostly graded away from the house, and we have even installed a lot of yard drainage in the back where we had water issues, and at the same time we tied in all of our downspouts to this system. On the west wall, there is a general grade away from the house, but right at the house, the level does go down slightly towards the foundation where there used to be landscaping that was torn out by the previous homeowner.

We have lived in this house for 3 winters. During the winter, we have often dealt with excessive moisture build up on our interior windows. We have attempted to deal with the moisture, but the house was always humid in the winter, so much so that we often run a dehumidifier. This never sat well with me and I tried re-installing bathroom fans/running new bathroom fan venting to help deal with these issues, and I was even to the point of getting ready to install a fan over our kitchen sink (to suck away excess moisture) and vent our microwave range vent outside (which I should do anyways), but no changes ever seemed to help that much.

A few nights ago, we moved a bookshelf out of the corner of our living room and found two spots of jet black mold. We cleaned these patches and didn't see much else except for a little mold behind the trim. However, the wall was a little soft in that area so we cut up approximately 10" to see what was going on.

A little background on the room: This house is on a slab. Everything is at one level except the room in question, which is the living room. It is set down approximately 6" and there are large step downs into this room from the kitchen and main hallways 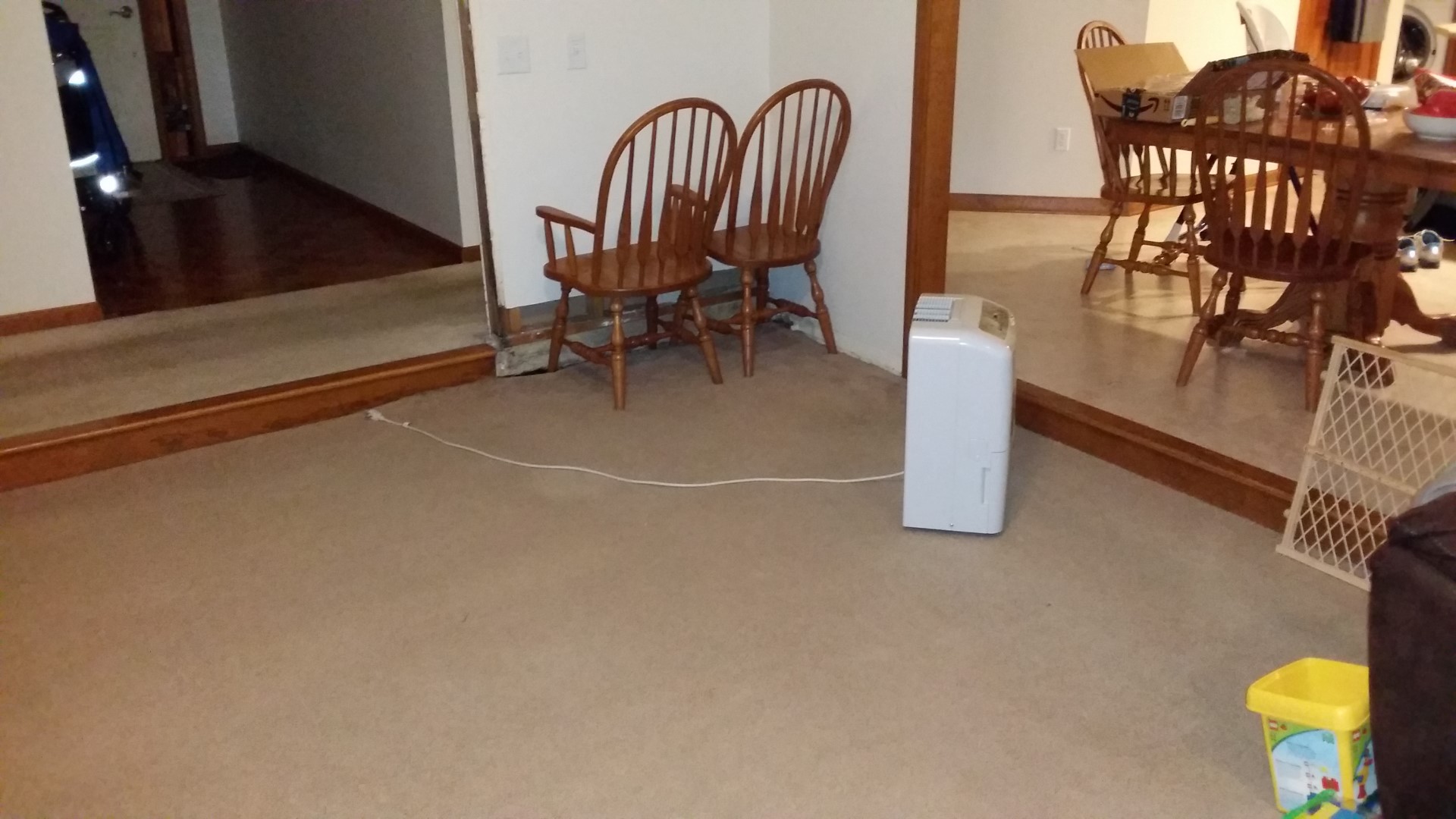 The corner with the two chairs is the corner we cut into. This is the south east corner of the room. The outside of the house is on the west wall and partially on the south wall. There is a board (presumable ripped down to fit, looks something in between a 2x4 and 2x6) that I believe is only installed to provide a place for nailing on trim and the kick plates at the doorways. 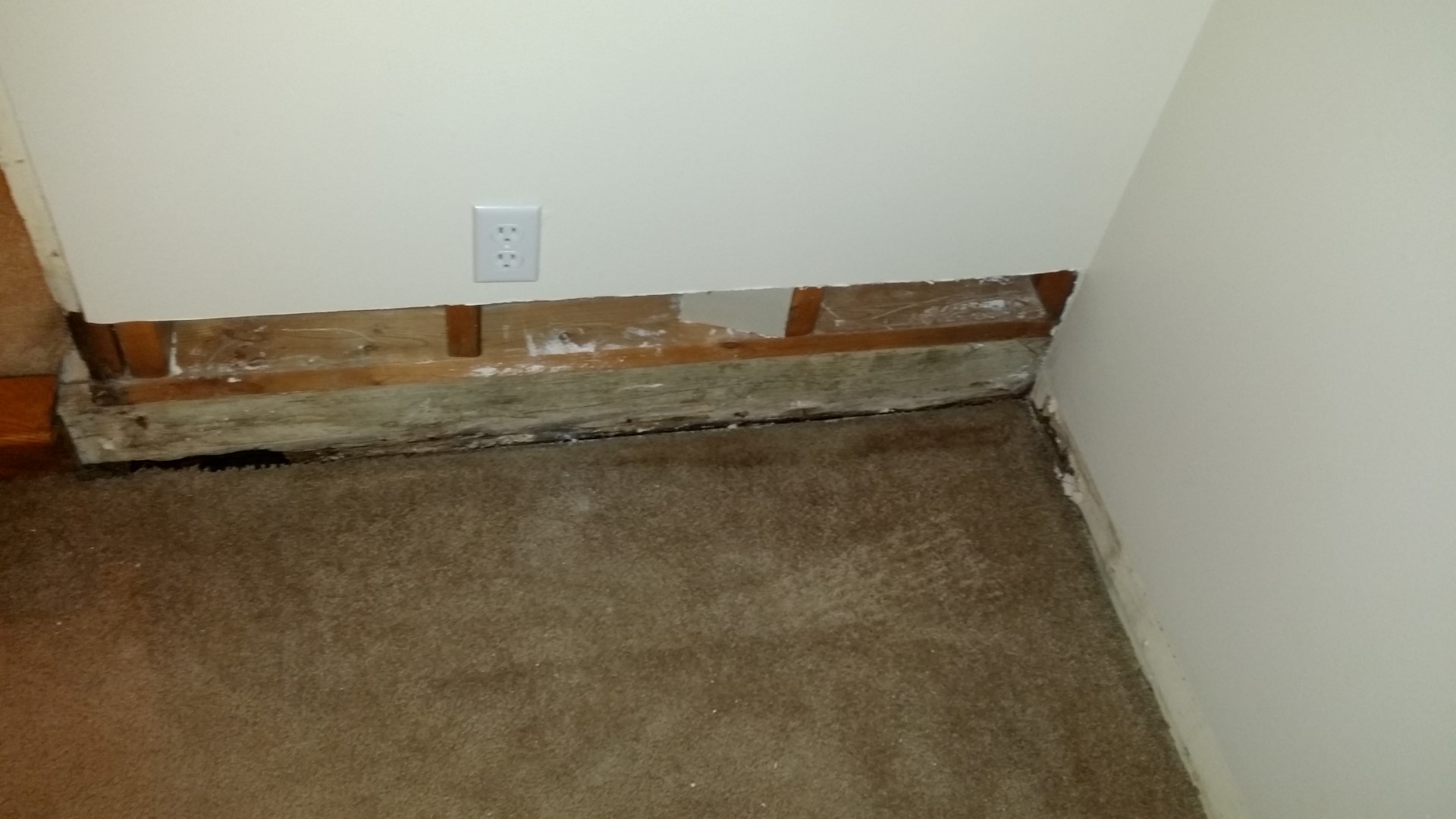 But as we looked below that board, we saw that below it was another board that was very wet (and we haven't had heavy rain in over a week, maybe two) and was very rotted out. Here is a picture below but it is very hard to see (I've brightened it and increased the contrast so it can be seen) 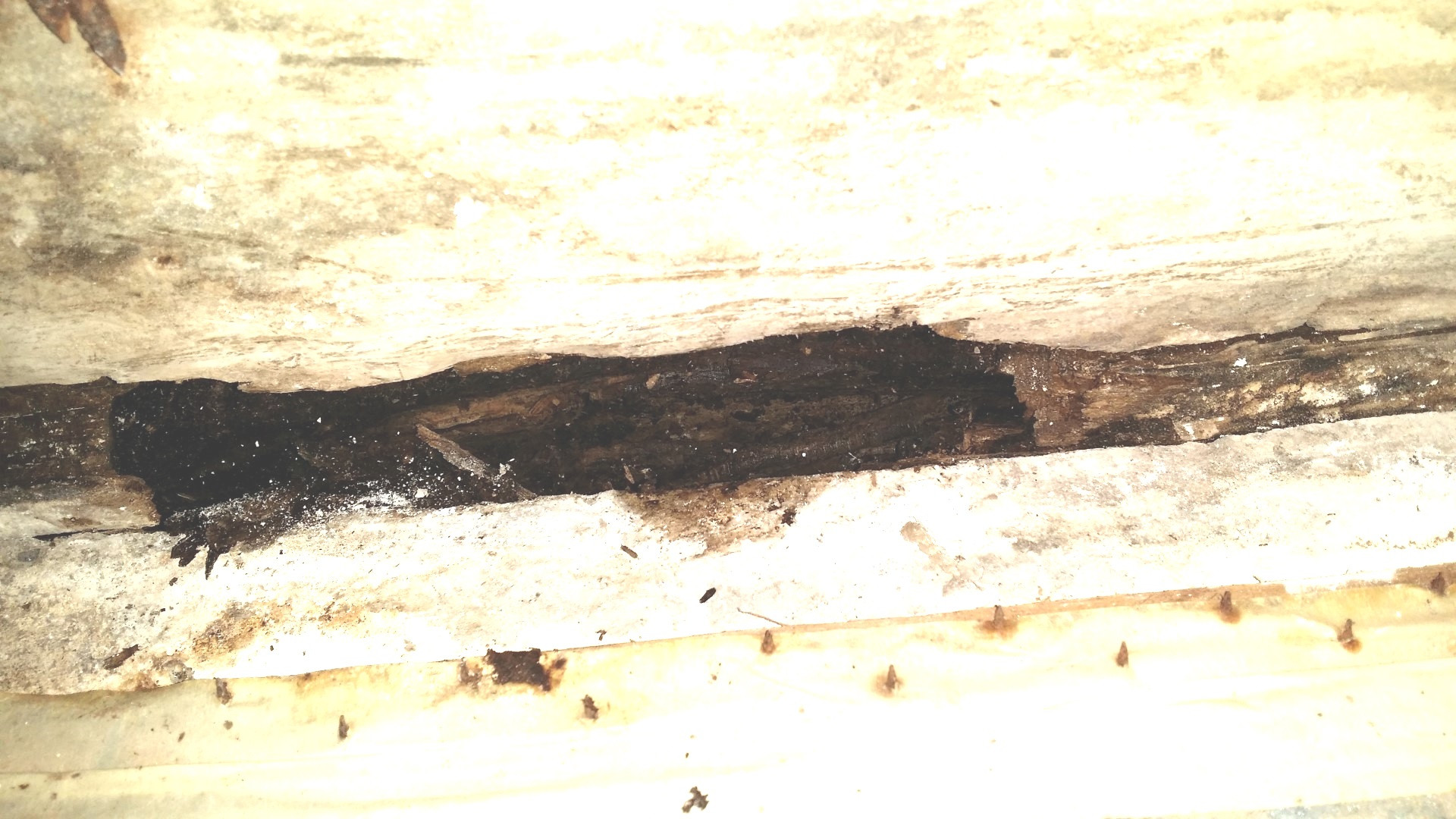 It is almost like the boards go all the way to the ground and we are seeing water seeping up into the boards and the moisture is just sitting there. It hasn't really traveled up the wall (the drywall that is above our cutout all looks good) but it has totally rotted out that lower board and the excess moisture plus the lack of circulation behind the shelf obviously caused some serious mold.

I'm certainly not afraid to do the work myself as I am relatively handy, but I'm just not entirely sure how to stop the water in the future. Also, for note, we have checked out water meter with all sources of water consumption turned off and we do not have a leak in the slab. Additionally, there is nothing in the attic that shows any kind of roof leaks or water damage of any kind.

Where I live, we have ground water issues year around. This is obviously subterranean water, (i.e.: you say, not roof, no water leak, etc. I also assume no window leaks, because you say it's in the recessed room...only.)

1) Shallow water table: if the "area" around your home is generally flat, rain will greatly affect the water table. You say, "have not had a heavy rain in over a week, maybe two," makes me think you get "heavy rain" from time to time. If so, that water will make the water table rise and put water "pressure" on the bottom of your slab...especially the lowest slab.

Where I live, we'll install French drains under slabs to make sure the water from the water table is diverted away. Btw, those roof drains that you connected, did you extend them to a stormwater system, or just run them to a ditch where they can seep back down in the ground?

The only way to relieve this pressure is to install French drains around your house. The size and depth depends on your site, (slope,etc.) and soil conditions. Remember, you are trying to lower the water table. So, after you gather the water in the French drain, make sure it is discharged off site. Don't let it seep back in the ground. This may take a pump.

Not the answer you're looking for? Browse other questions tagged water concrete leak moisture slab or ask your own question.

4
How to stop concrete slab floor from absorbing water
4
What's the proper way to address a moisture issue in a concrete slab?
0
Has the DPC (damp proof course) failed if moisture is showing above paint?
0
Water seeping through where pipe exits slab foundation
1
How to deal with soil erosion under slab floor of garage?
1
If carpet has been dry for years is moisture level OK on slab?
3
Why does water appear just below my basement slab in one location and not another?
0
Can the vapor barrier between a dry floating concrete slab and linoleum flooring be foregone?