Loadcenter relocation -- how should I handle the resulting "trunk" of conductors, short of rewiring the house?

So, I've been considering my options for fixing the known major Code violation in the house I have in SW Missouri, namely that the house's only loadcenter was placed in the second floor master bathroom over the toilet there, in contravention of NEC 240.24(E) and 110.26(A). (There are some minor violations related to missing faceplates, damaged receptacles, and an improper luminaire in a closet application, but those are trivial to fix compared to this.)

Said master bathroom is located on the north side of the house, near (but not in) the northwest corner, while the feeder powering it comes in from an overhead triplex line via a mast on the west side of the structure, entering using a LB located between the first and second floors. (As is typical in rural areas, the meter is on a pole on-property, with disconnects mounted to it for feeders to structures.) This raises the spectre of a 225.32 violation as well (the master bedroom is closer).

Finally, said loadcenter is full to the brim if not overstuffed -- it's a 16 slot, presumably pre-CTL as it lacks CTL markings on its labeling, QO with a backfed main breaker and 9(!) double-stuff breakers in there. Out of these 16 slots, it feeds a total of 22 circuits:

As a result of all this, I want to replace the loadcenter with a larger loadcenter located in a more germane location, either inside the master bedroom itself, or on the first floor, either inside the mechanical room located under that part of the master suite if space permits or outside if space does not. See the diagram below for a rough idea of how things are located relative to each other -- the north arrow is really "north-ish" as it's maybe 15 degrees off relative to the house, by the way. 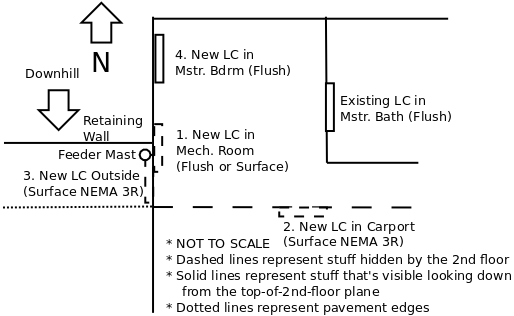 Given all this, and the fact that preserving as much of the original finishes as is possible would be desirable (it was originally built as a custom house, and has some fairly nice work inside worthy of restoration), rewiring is a "nuclear option" to be resorted to only if stripping the house to the studs is merited for other reasons, or if other major electrical problems are noticed (it's a 1969/1970 build, so there is the off chance that the dreaded EC grade aluminum lurks inside, and I wasn't really able to look when I was there last due to the need to focus on documenting the present condition of the house). This does leave me with a few options for connecting the existing cables to the new panelboard, though.

The first option, and probably the most obvious one to most folks, is to run a giant bundle of NM cables between the old and new locations. However, parallel running 20+ NM cables takes up quite a bit of space (due to cable support requirements in vertical runs), and bundling them together gets you a whack on the head with the 310.15(B)(3)(a) derate requirements that force you to 6AWG for the 20A circuits and out of NM world entirely for a mere 30A circuit.

In addition, conduit routing within a finished structure is no cakewalk; inside bends in particular pose a challenge due to the wide sweep radius of conduit bends, especially in larger sizes, and the nonexistence of LF conduit bodies. Finally, conduit bodies in random places are a minor finish challenge, but no worse than dealing with an extra junction box that got shoved somewhere, which is something most folks are used to.

The good news for this is that it opens up the possibility of using aluminum THHN for at least some of the "trunk runs", which is viable considering they'd be running between Al/Cu breaker lugs and AlxCu mechanical splices anyway, and could save a fair bit of money, depending on pricing and derate adjustments.

The third option, and one that most folks wouldn't consider, would be to use a wireway in place of a pile of conduits. These are used somewhat like conduit, but instead of basically being a pipe for pulling wire through, they're a trough with a removable cover that you lay wire into.

This has the advantage that installing the wiring becomes far easier than a conduit pull; however, they are designed to be run exposed, or at the very least in a way that the cover can be removed later to gain access to the wires inside, which creates a kind of "long" finish concern that is unusual in residential wiring.

While this is likely the most space-efficient approach, even with the 20% fill limit on wireways, once again, the fill rules hit you over the head with the proverbial sledgehammer. While using a metal wireway staves them off until you put more than 30 conductors in the wireway as per 376.22(B), when they do, they bite hard, forcing upsizing/derating problems similar to those encountered when bundling all the branch circuit "trunk" cables together. The good news, again, is that aluminum is an option in this case as well, which could mitigate the costs of upsizing due to conductor derates.

The final option is to use multiple smaller wireways in parallel, with maintained spacing. This provides the same advantages as one big wireway, but with the additional edge that at 15 circuits/wireway, 376.22(B) does not require any derating of the conductors in a metal wireway, allowing me to pull normal sized wires. Even at 20% fill, this is much nicer than conduits, partly due to the ability to route them more freely in some ways -- inside bends aren't an issue, and you don't have to worry about bends per pull point either.

Out of the four options presented here, what's the most practical, assuming parts availability isn't an issue? (No matter what I do, I'm going to be hitting up a supply house in the area for the loadcenter and breakers as a matter of course, so getting wireways, conduit, THHN, and whatnot should not be an issue at that point.)

Upsizing wire for a derate: absolutely not. It's too much work. Do you really want to wrestle that much #10 Romex? I don't like the wireways (or the racks of Romex) because I have no idea how to keep that from becoming a fire corridor.

Honestly I would do it in 1/2" conduit, possibly 3/4 max, all EMT so the ground wires go away. I would put 4 max circuits per conduit, so derate isn't a factor (well, maybe on the 40 and 50, if they take this route, but I'd run them nearly alone anyway, to keep the conduit small.) Yes, it's conduit-o-rama, but it's the smallest size.

It goes without saying that you pull out any circuit that you possibly can and reroute it direct. I would even argue for splitting it out into a main and one or more subpanels, if this helps with routing.

Lastly I would think about how the Victorians do things with faucet access: putting a tasteful "cabinet to nowhere" in the right places for utility access.

0
How do I derate for 2 dryer circuits in one conduit?
1
Running circuit and generator hookup in same conduit?
0
What gauge wire do I need for basement sub-panel?
2
Conduit fill - number of circuits .vs. number of branches
1
Splitting Service Equipment Across Two Enclosures
1
Does a new manufactured home on permanent foundation need a shutoff within 30ft?
0
Can I put the sub-panel for my attached garage in the attic?
1
Leave extra wire in conduit for future expansion
3
Wiring subpanel in detached garage
3
Does NEC allow mixing wire gauge in distinct sections of conduit when derating?