Does the lighting fixture size change the number of allowed wires in a junction box?

In am working on a 1920s era home. The electrical system in the house has been updated several times in a very hodge-podge way. Originally the house had conduit in the attic going from light receptacle to light receptacle. At a later date, romex was run from those light receptacles to plugs in the walls. Now I am replacing all the old rubber and cloth wire because it is disintegrated.

I recently checked the conductor limits for these boxes in the NEC and found that nearly every fixture is way over the limit. For example, the bathroom fixture has 13 "wires" (a mix of 12 and 14 gauge!) in it and each box is only a 4.5"x1.5" round box. The wire limit for this size box is 5.

The lights in use before I removed them were the type that are flush with the ceiling and thus didn't allow for much extra room. I am wondering if the light fixture size changes the number of allowed wires. For example, if the light fixture has a big ceiling mounted box like this one: 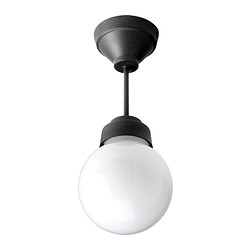 Does that change the allowable wire limit?

And, if not, is the only answer to get rid of the current boxes and put in much bigger ones? Is there a better way of addressing this issue?

Here is a Code language excerpt for your situation:

314.16(B) Box Fill Calculations. The volumes in paragraphs 314.16(B)(1) through (B)(5), as applicable, shall be added together. No allowance shall be required for small fittings such as locknuts and bushings.

Exception: An equipment grounding conductor or conductors or not over four fixture wires smaller than 14 AWG, or both, shall be permitted to be omitted from the calculations where they enter a box from a domed luminaire or similar canopy and terminate within that box.

So, the light fixture you have in your post would qualify as a domed luminaire and the wires from the fixture itself can be omitted from the calculation if there are only 4 or less. However, this does not add volume to the box calculation itself.

Unfortunately, junction box overfill is probably the number one violation of the Code.

Not the answer you're looking for? Browse other questions tagged wiring nec or ask your own question.