I'm currently installing a double check backflow preventer and code says that it needs to be able to be "spun/turned out" for maintenance if required - this is the valve in question.

Now the pipe that is going into either end of the valve is 1/2" pex and I'm using this 1/2" Brass PEX Barb x Male Pipe Thread Adapter to make the join. 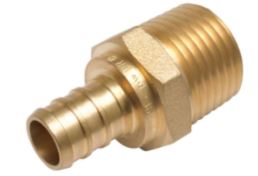 Given that the pipes wont spin, I'm wondering how I make it easy to "spun/turned out" without cutting the pex?

If I spin the value it will alway get tighter at one end... is the idea that I only half screw it in at end to allow it to spin up that thread whilst coming off the other end or should i be using female adapter on the end of the pex and a male/male adapter which can be spun? Or do I just remove the pex clamp at one end hence disconnecting it from the pipe?

I've seen PVC unions which would make this easy but I haven't seen the equivalent for pex.

If you don't want to convert over a copper union to Pex (which would probably require a little pipe sweating), the Pex unions available are pretty cheesy pieces of junk.

Luckily for you, Pex will twist on it's own fitting. I wouldn't suggest doing it very often, but the once or twice you may have to remove that fitting from the check valve for "inspection", you'll be fine.

Not the answer you're looking for? Browse other questions tagged plumbing valve pex or ask your own question.