Is it safe for baseboard water heater power supply to run insulated wiring over heating element?

I have recently moved in to a new apartment and found a transformer (which takes 120V @60Hz and outputs 24V 20VA) into a wall outlet with two wires coming from it and leading directly into one of my water baseboard heating units. 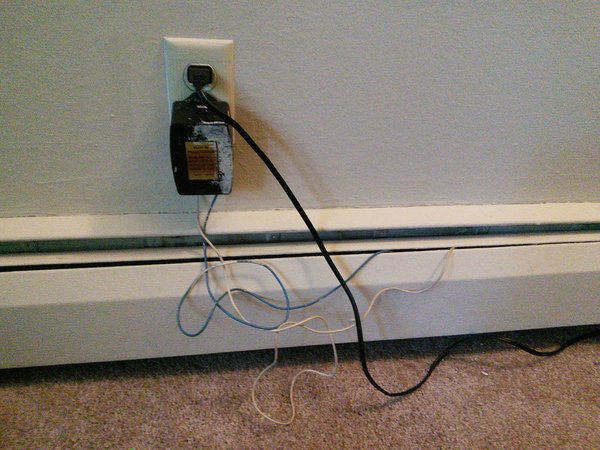 I called it in with management and they see no problems with it. According to them, this powers the heating unit, and should not be unplugged. I'm a bit worried, though, for a couple of reasons: those wires for the transformer run into the unit, rather than across and into the end. I pulled open the unit and the wires are spliced in to the wiring, but they rest on the fins of the radiator on the inside of the unit, and I'm worried the insulation could melt, possibly creating a short between the two wires via the fins.

My other concern is how the wires themselves are attached to the transformer; they are screwed in at the insulation stripped ends, and I'm worried this could be a shock hazzard for children. 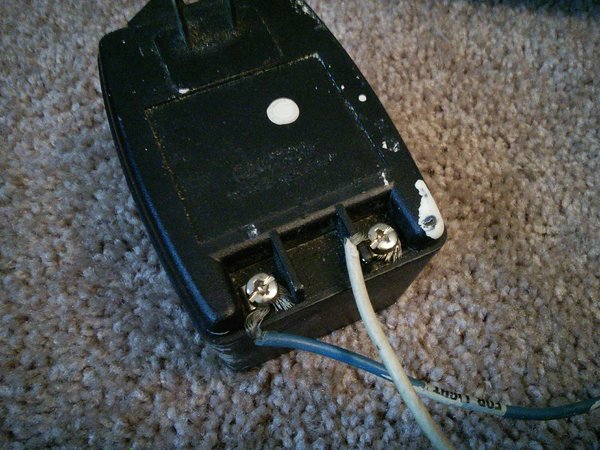 In case it matters, there are 3 sets of heating units, one in the living room, one in the bathroom, and one in the bedroom. There is a single wall-mounted thermostat which I presume controls all 3 heating units. I cannot test any devices currently due to it being summer and the central boiler not being on, and with my concerns, I'd be afraid to even if I could.

My question is, is this an unsafe wiring setup? For safety's sake, I will not be performing any modifications to the wiring setup, but I would like to know whether any of my fears are warranted.

The 24VAC transformer output is low-voltage wiring, widely regarded as safe from electric shock. Low voltage sources like car batteries are incapable of delivering a noticeable shock, except on TV dramas and bad movies.

The wiring is atrocious and violates the rules on wiring methods and NEC 110.12 "neat and workmanlike". However it is low voltage wiring so it's not likely to burn your house down. Virtually all wiring is safe for 75 degrees C (167F), with some good to 90C, so it's unlikely to be damaged in a hot water system.

What is not safe is the USA style plugs. If the plug is pulled partly out of the wall, it may be possible for tiny fingers to get between plug and wall and touch the plug blades while they are still in contact with the hot contacts inside the receptacle. But if you notice, every appliance has this same plug and this same problem... and there is no much you can do about it.

Also, if your receptacles are not "TR" (tamper resistant) type, it is fairly easy for little ones to stick metal things into the receptacle slots.

To me this looks like an aftermarket repair to add or replace the control voltage. As far as a shock hazard it is low voltage so that is not a big issue but the wire does not look to be high temp but is hard to tell. There would be a code issue using this plug in transformer to power a permanently installed device.

Not the answer you're looking for? Browse other questions tagged wiring water-heater safety or ask your own question.

3
Is it safe to simply replace a heating element in an electric water heater?
1
How do I wire this thermostat?
2
Is this a compliant way to control three circuits with two switches?
0
Baseboard water Heater
1
Power supply installation for storage water heater
2
Explain different type of fire detector?
1
Is a tank less water heater a bad choice for a house with low water flow?
3
Replacing old doorbell transformer - wiring