A question and a subquestion:

I've looked at a number of similar questions on here and spent some time wandering the internet, but I can't seem to find anything that relates to my situation exactly. I'm sure it's out there, but I just can't figure out how to find it.

We recently moved into a new home and today the kitchen sink drain came apart. When I investigated, I found some stuff that just looks obviously wrong to me. I've listed all of the things that I see that seem like issues, but I suspect that the mess originated with the addition of a dishwasher and the tailpiece that was added to the right side. It clearly has leaked in the past and today the misaligned fitting marked A simply disconnected entirely. I don't know if the connection at E is cemented or simply holding together with years of accumulated filth, but it doesn't even have a compression ring. I'm less than impressed with the home inspector's quality of service on this one... 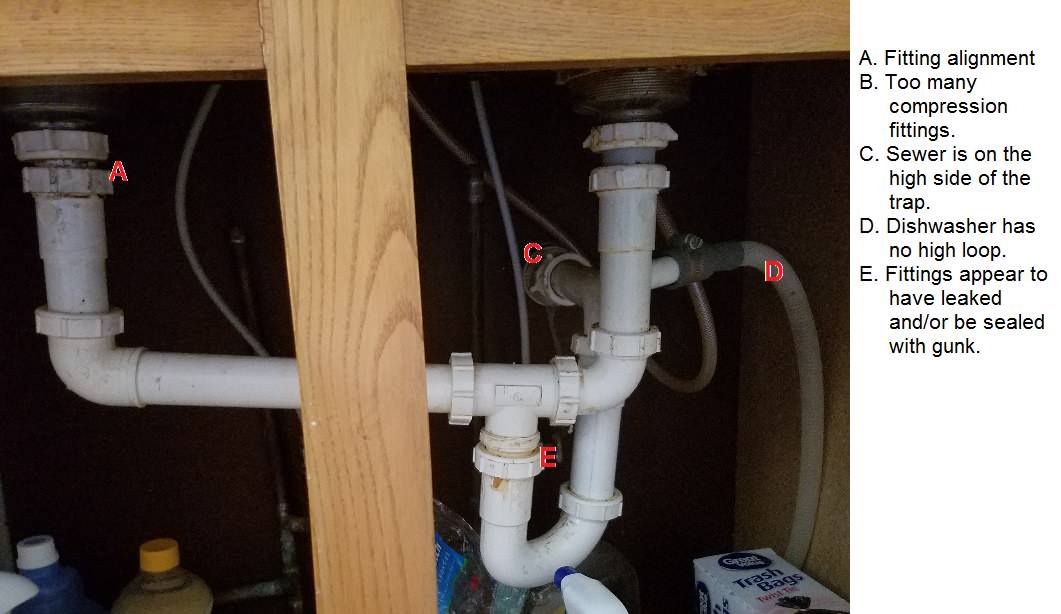 My primary question is, is it acceptable to have the sewer on the high side of the p-trap? I could replace most of this with cemented fittings in more or less the same configuration it currently has without too much work, but the entire p-trap, horizontal drain from the left sink, and part of the tailpiece from the right will be filled at all times. There won't be sewer gas issues, to be sure, but this doesn't seem right.

If that's not acceptable I've come up with a couple of options for replumbing the mess. (Honestly, even if it is, I don't like the idea of storing a gallon of drain water in the pipes under the sink.) 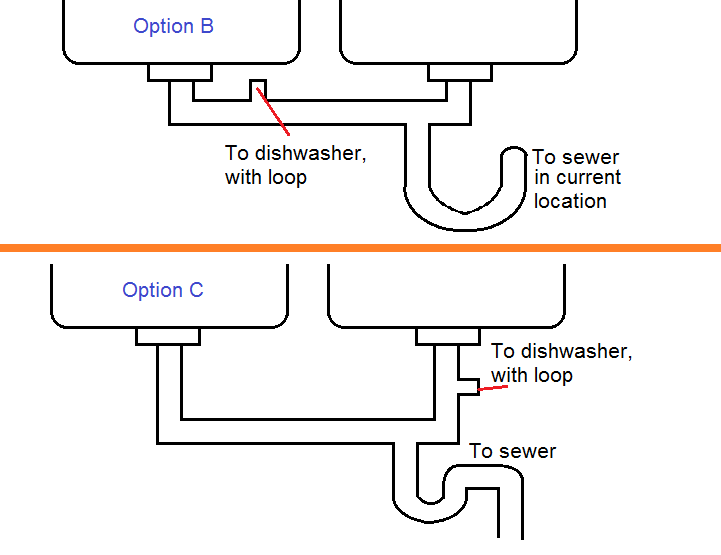 Option B: This is the one I'd like to do. It would open up space in the cabinet and doing it should be relatively straightforward. I'm not sure if the dishwasher drain placement is acceptable though. I'd bring the horizontal pipe up as high as possible below the sinks, then plumb the dishwasher line into the horizontal drain between the sinks. I've never seen it that way before, but I can't see why it would be an issue (and of course the dishwasher line would come out of the top of the pipe and have a high loop.)

Option C: This is a possibility, though I'd really rather not. I have access to the drain in the open basement ceiling. I could remove the existing sewer line and run it up through the floor into the bottom of the cabinet. The only issue with this is that it essentially creates an S-trap, which I don't think is accepted anymore.

Option D: Cutting into the wall in the back of the cabinet and dropping the sewer line 6 inches. I know that this will do the trick, but yuck.

EDIT: For the curious, the fitting at E was just jammed together and sealed with sludge - neither the beveled sealing ring nor the threaded compression part of the joint was present. The entire system was approximately 1/3 full of sludge. It was truly revolting. Whether the original met code or not (I can't believe it did), this was a horrible idea for a drain setup.

Replacing the whole lot is certainly the way to go. The layout is daft and it seems held together with wishful thinking.

What to do? Something like what you have in mind but IMO the dishwasher should join in immediately above the p-trap.

Many companies sell complete packages for what you're trying to do. 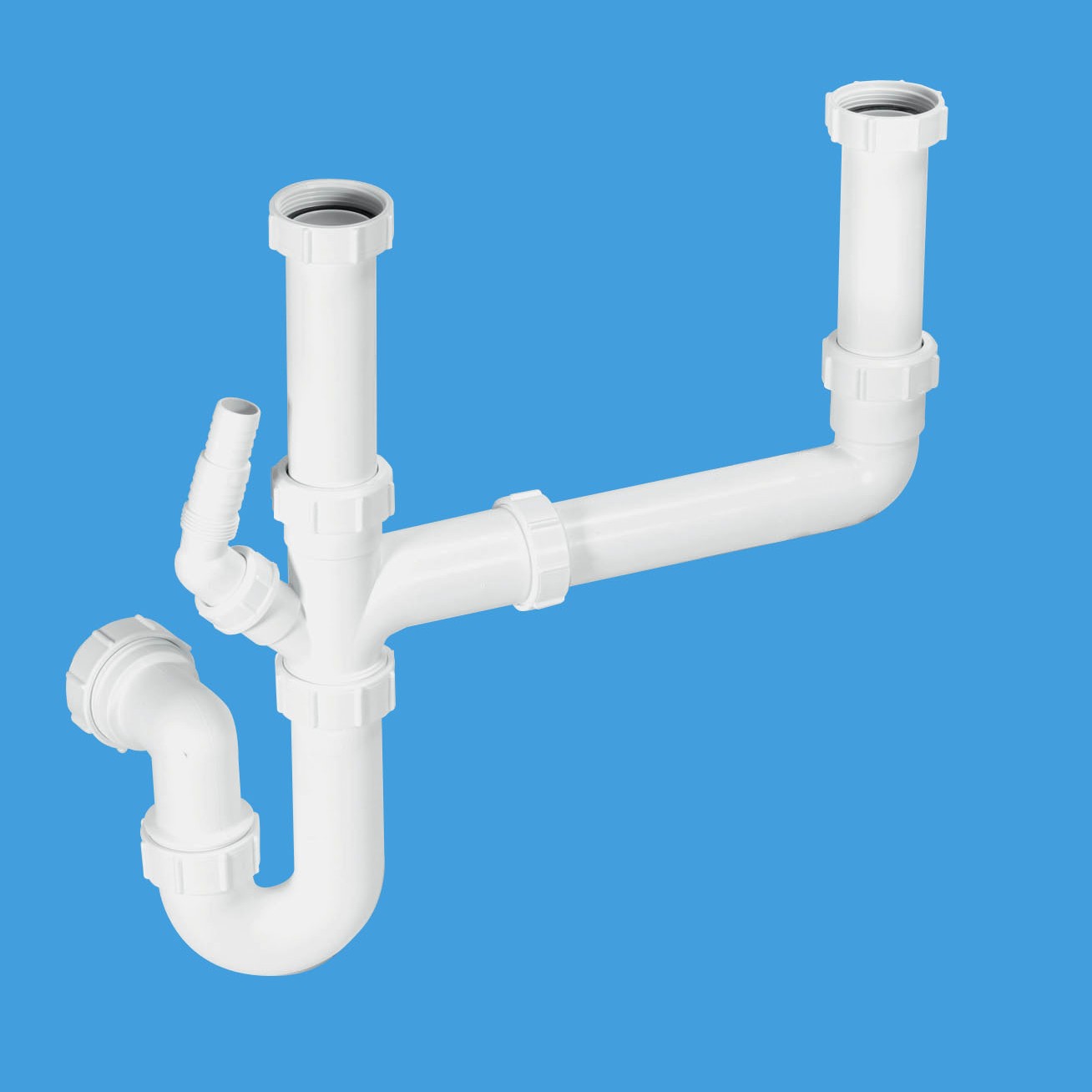 Or this one listed as "space saving" 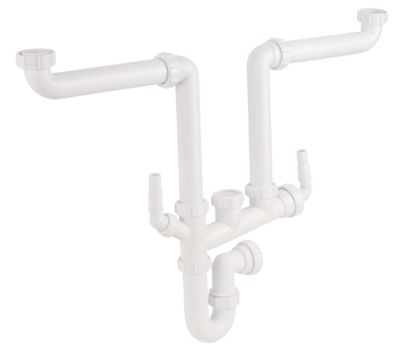 Unfortunately, once you've done all of that I think you're still going to to find that the waste pipe comes out if the wall a little to high up.

You do want to find a solution that allows the entry into the sewer to be on the low side of the P-Trap. And I tend to agree that you may very well have to lower the sewer pipe connection point at the wall.

As far as your Option C goes....that could indeed lead to an S-Trap type construction and mainly because the downward side of the piping where you poke it through the bottom of the cabinet and down into the space below would not be properly vented.

In fact you do need to comprehend where the vent line for the sewer at this site is located. It most likely is going straight up in the wall from where the rear wall sewer connection is located. If that is indeed the case you should open up the wall in back and lower the connection point but also maintain the vent connection. The vent back there is what breaks any suction that occurs when have an S-Trap type connection.

Here is a good tutorial regarding S-Traps that you may want to read.

1
Can I move this drain line from the wall to the floor?
11
Sink tailpiece doesn't line up with trap
8
Do I have to periodically pour water down my basement floor drain to maintain the p-trap water seal?
1
How can I lower a dirty arm trap drain(outlet) to accommodate a lower sink?
0
How do I replace a sink drain body when there isn't a trap?
1
How can I align an existing drain trap with my new kitchen sink?
1
How can I extend the rough-in drain away from the wall?
5
How do I plumb this kitchen sink to stop the leak and improve drainage
2
Wall drain too high for p trap