How can I create a vapor barrier between my home and its crawlspace which frequently has standing rain water that must evaporate and drain? Some first floor rooms have smelled damp for years. I am renovating the home, so now is the time to fix this.

My house on Long Beach Island in New Jersey is built on a man-made land mass crossed by lagoons. The water table is only a foot below the surface of the packed silt soil. After a rain storm, the vented crawlspace has standing water which takes a few days to evaporate and soak into the damp soil.

Most of the crawlspace floor is loosely covered with old plastic sheeting. Kraft faced insulation hung between the floor joists, but I removed it after Hurricane Sandy flooding ruined it. I found holes and gaps in the plywood subfloor for wires, pipes, and even a large hole beneath the tub drain.

How can I create a vapor barrier between this wet crawlspace and the plywood subfloor? How can I fill the various sized subfloor holes around the electrical wires and copper pipes? I will be creating a plywood box around the tub drain, but should I insulate it? Before I install bedroom carpeting, can I install a vapor barrier on top of the subfloor?

I will make a separate post about the damp smelling rooms. Thank you for your input. 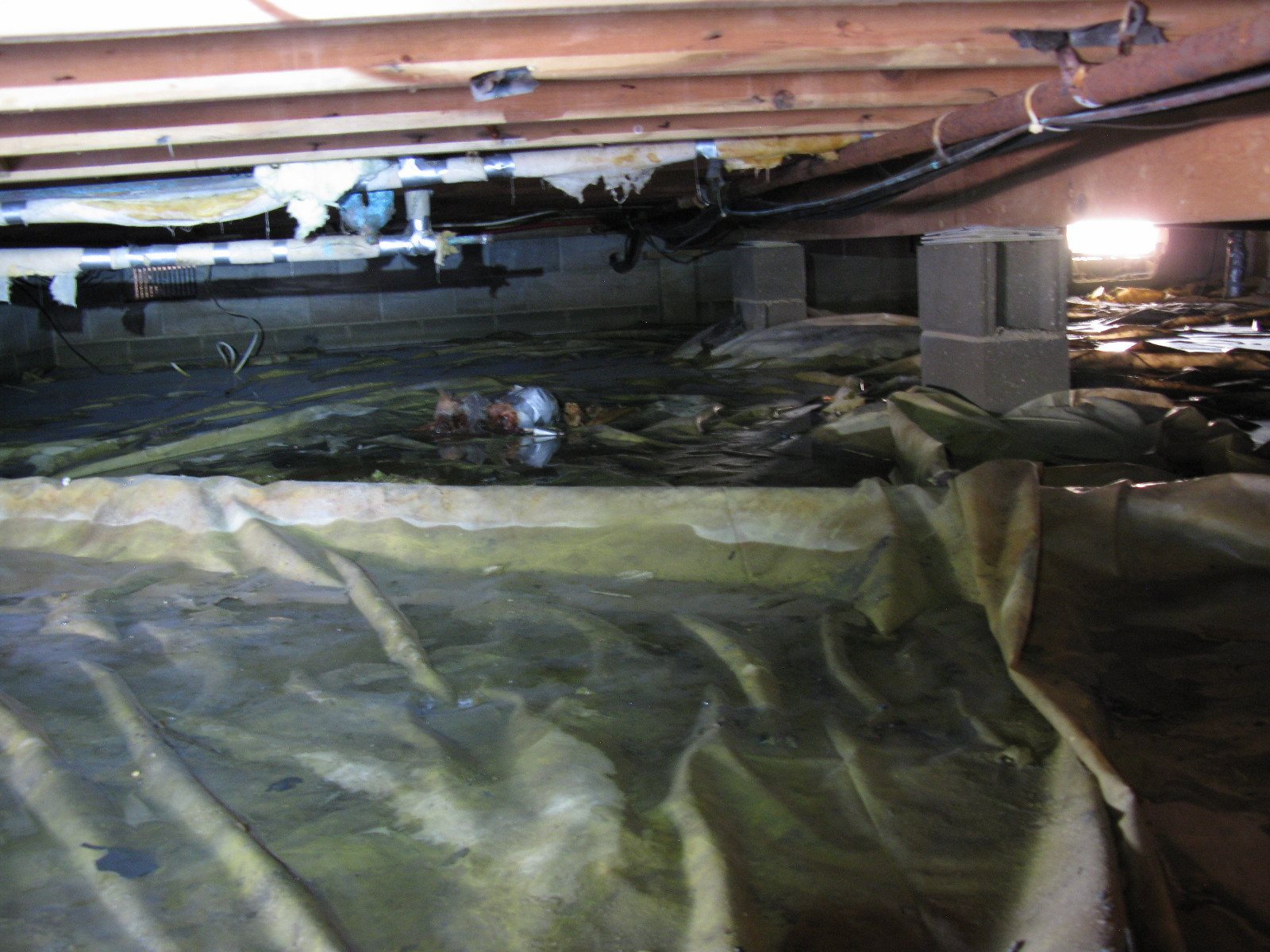 I think you have to do whatever it takes to keep that water from pooling under there. French drains, dry wells, sump pumps, etc. You can't have that standing water there and not expect mildew smells to get into the house. After the water is mitigated, you need to have the crawlspace sealed, and dehumidified.

I agree with BrianK. But, your biggest problem is the plastic. That, should be removed entirely and should've never been installed, especially in that fashion. The plastic is stopping the water from seeping into the soil and the plastic should've only ever been attached to the bottom of the joists and beams, so water could come and go without affecting the building's and people's lives.

Not the answer you're looking for? Browse other questions tagged crawlspace vapor-barrier or ask your own question.

2
Find and eliminate musty smell in bedroom and bathroom

4
Should I vapour barrier an (inside) sistered wall when the exterior wall already has it?
3
Renovating Crawlspace with Poured Concrete Floor
4
Vapor and moisture barrier for "above ground" basement
0
Running cable through vapor barrier
1
After 6mil vapor barrier in crawl space, moister gathering between insulation and flooring
1
Moisture on crawlspace dirt/clay floor
5
How far from the foundation and how deep should a French drain be?
2
If I have vapor barrier under joists in crawlspace, is hardwood underlayment a problem?