How can I repair the rust penetration in my air compressor?

I have a compressor that I use for pumping my bike, and now a hole came out of nowhere in the tank. See picture. And some orange powder also came out of it. 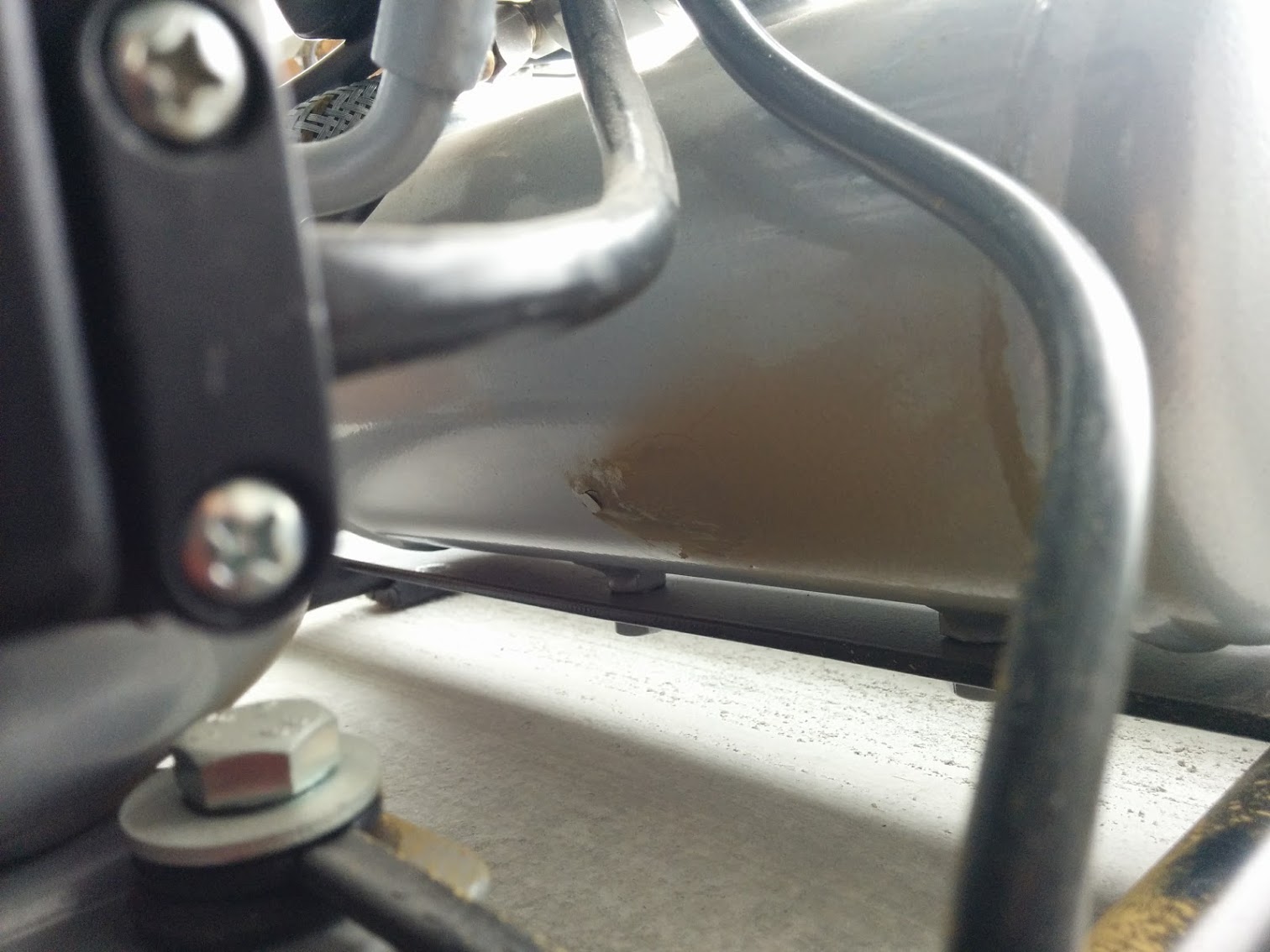 Does there exist glue or similar that can close the hole?

I highly recommend against attempting to repair a tank that handles compressed air at over 100 PSI. Failure could be impressive and catastrophic. None of the liquid repairs designed for fuel tanks or tires are in any way appropriate, and a full reconditioning is not cost-effective.

fred_dot_u is correct that the damage was caused by internal moisture. The entire tank is compromised, and the scope of the damage is likely far greater than what's indicated from the outside. The fact that the penetration is so high up seems to indicate neglect. A compressor should be drained daily after use.

Retire the compressor, or fit a new tank that's rated for the intended purpose.

If the hole appears to have been formed from the inside out, it is possible that it is caused by rusting of the metal. The orange powder may be dislodged rust, which would confirm the above supposition.

Compressors fill a tank with outside air, causing it to become warm. As the compressed air cools, water previously suspended in the air as water vapor will condense and collect on the bottom of the tank. Many larger tanks will have drain valves to allow removal of this water.

Smaller tanks frequently do not have these valves and can be drained by turning the tank in such a manner as to position the exit hose opening at the bottom. Expect a spray of water to appear when opening the air valve.

Unfortunately, if you are experiencing enough rust to create the hole you've noted, the rest of the tank, or a good portion of it is also rusted.

As an extended process, one could pour a quantity of rust treatment product into the tank, then rinse out the resulting sludge and debris and allow the rust treatment product to dry. Following that, a sealant of the type used to seal fuel tanks could be used. This would prevent additional rust from forming and very likely close the small hole you've identified.

I understand that the use of fuel tank sealant is unpleasant. In the case of a high pressure vessel, such methods are not recommended, see Isherwood's answer as reference.

All of the above also requires that you have a suitably sized opening to access the inside of the tank. Few small compressor designs will have such an opening.

It may be necessary to retire this device.

Not the answer you're looking for? Browse other questions tagged repair adhesive metal hole or ask your own question.

9
How can I further diagnose my central air conditioning compressor fan motor and capacitor?
6
How can I repair rust damage on a steel shed?
0
How can I repair this damaged air compressor?
0
How to repair pierced refrigerant line in chest freezer?
1
How do I reinforce an old mortise and tenon joint?
1
How to find the leak in a basement?
5
Can I fill a drywall hole with something and reuse the hole?
0
Gluing metal and glass pieces of a lamp (Artemide Demetra)
0
How to repair a hole in exterior concrete foundation
0
which glue to repair kids floaties?