What is attached to this spigot and how to remove

This adapter is attached to an outdoor spigot: 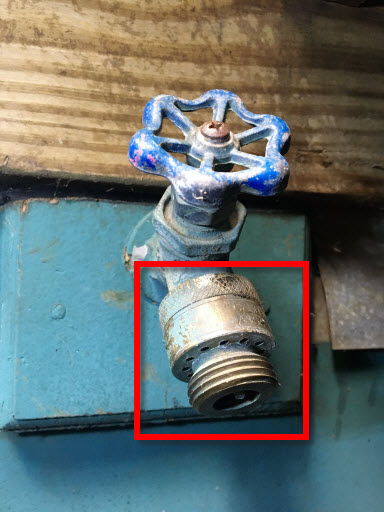 It is near the location of a former hot tub so I believe it has something to do with pressure control. When I attach a hose to it and turn it on if the hose is not flowing (e.g. a closed nozzle at the end) the water leaks (more like squirts, lots of it) from this adapter, it appears to be from the holes and not the connection to the spigot or the hose.

What is this thing? Is there a way to utilize it? I'd like to remove it so I can use this spigot but when I try to unscrew it with a wrench it does not budge - in fact the spigot itself starts to rotate. I wasn't really able to tighten a pipe wrench to the spigot due to the available clearance & pipe width.

There appears to be a rivot on the under side of the adapter but it is difficult to tell, it is somewhat rusted over.

My original concern was water leaking from it when it was used. While a plumber was on site doing a different job I asked him to look at this to see if something was wrong. He said the vacuum breaker wasn't working properly and ended up replacing the entire hose bib (with new vacuum breaker), I presume because he was not able to remove the vacuum breaker as well or it wasn't salvageable. Now no water spews out when it is used.

An anti-siphon plumbing device is a special device that has a one-way valve designed to stop the flow of potentially contaminated water back into the drinkable (potable) water supply.

Anti-siphoning capabilities are required by code on certain plumbing devices such as exterior faucets (sillcocks).

On exterior faucets or sill-cocks, the anti-siphon device protects against the risk of the faucet being connected to a hose that is immersed in contaminated water or attached to a chemical sprayer.

I agree that this appears to be an add-on device which could probably be removed with a locking pliers or pipe wrench.

I learned a little about these doo dads this year when the two on our home started leaking after the winter freeze we had in Texas. The rubber grommets inside both went bad. After trying to get them off with no success, I took a picture and headed down to my favorite plumber dude on isle 9 at our local Home Depot. He laughed and smirked a little, then told me the backstory aaannnnddd... the trick to getting it off. Apparently, the home builders - after having a few too many of these stolen from homes during & after home builds - started enforcing the installers to grind the little locking screw off so that they could not be removed without a bit of work.

That little rusted over rivet spot, that’s where this screwhead used to be. 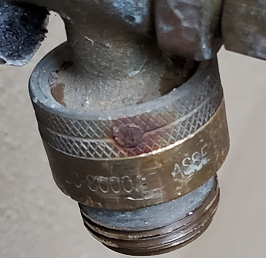 I also learned that there are two options you can buy when you need to replace one of these. You can buy the commercial grade that cost on average $30 OR you can get a non-commercial grade for less than $10. According to isle 9 plumber dude, they work the same. It’s like buying a Polo; does that little embroidered horse help with function?

So I went with the non-commercial $7 one, and they’re working great. Here’s how I got them off; you’ll need a drill bit that is made for going through metal. Place the drillbit on the spot where the screw was ground off, slowly drill out the old screw. Emphasis on slowly because you don't want to screw through and into the threads on the spigot. As you drill, take breaks to stop and see if it will come off. Eventually it will.

This is defiantly an add on vacuum breaker. As mentioned in @isherwood's answer it is a form of anti-siphon device.

The device simply screws over the existing hose bib connection, adds a simple vacuum breaker, and a new hose connection on it's end. Unless it is broken, there should be no need to remove it.

Most are held in place via a set screw. This is most likely the ‘rivet’ you observed. The set screw might be might have a round head, hex head, or even a hex key. Some are designed to that you break the head of the screw off after install so that it remains permanent. Most newer codes require that hose bibs be of the anti-siphon type and this devise is often used when upgrading an existing hose bib to meet code.

The device you're talking about is a hose bibb vacuum breaker that protects the water system from backsiphonage. Without it, leaving your hose end in the backyard kiddie pool could turn into a real mess for you and the City if a water pipe breaks or needs to be turned off for maintenance at the wrong time.

Closing the valve on the hose nozzle creates a situation similar to backpressure, as the pressure change from the nozzle closing propagates back up the hose and pipe past the vacuum breaker. The vacuum breaker is spitting out water to keep that water from getting into your plumbing because it might not be just water -- it might have crud in it that you don't want in your plumbing.

If it spits out water all the time not just in a burst when the valve is closed though, it might be faulty or jammed inside. I'd replace it with a new one though, or if you're willing to do some plumbing, replace the whole hose bibb with a frost-free type that has an integral vacuum breaker.

Not the answer you're looking for? Browse other questions tagged plumbing faucet removal hose or ask your own question.

2
Leaky outdoor faucet when using spray nozzle
0
How to replace difficult outside hose spigot handle?
0
Spigot leaks when sprinklers come on
1
Does a hose spigot with lower water pressure than my others indicate a leak?
1
Where to install an atmosphereic vacuum breaker for my fire pit spigot
0
Hose bib below grade, yard hydrants
1
What happened with my spigot and how to fix it?
1
What hose bib to use?
0
Where to place wrenches to remove hose bib