I'm a homeowner and renovating my 100 year old house.

The old pine stair treads are broken in several places and extremely ugly, and so they must be replaced. We also decided to open up the staircase, cut out the closed skirtboard and now the new stair treads will be longer and extend past the wall.

I went to HD yesterday and bought the new stair treads - we went with the pine. (Although I found the "made in china" tag only after cross cutting them to length, grrrr)

I began cutting the treads to length and it occurred to me that I'm going to have to do something to exposed ends that stick out of the wall - either cut a matching bullnose into them or attach a piece of molding instead. (This is also known as the nosing I think).

Question is: should I cut a matching bullnose into the ends of the treads that will be exposed, or glue/nail on a piece of molding. The former will mean that the end-grain will exposed and this does not stain well. The later means that I will have to a fair amount of more work and I'm wondering if it's worth it.

This illustrate the piece of trim I'm talking about: 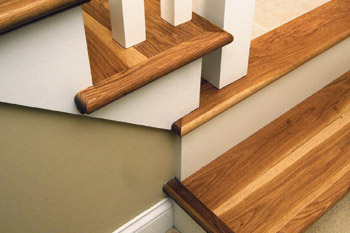 I can actually make the molding myself from the waste that I cut off the treads when cutting them to length - and it won't be edge grain either. I'll need to route a matching roundover into the flat edges though.

Problem is it's a lot more work, the joint between the tread and nosing will not be very strong unless I cut a tongue and groove joint into it or something (even more work), will require the cross cuts to be perfectly straight yet my table saw is too small so I've been using a hand-held circular saw which is not perfect.

UPDATE: The job is done and it looks great! Here's how I did it: http://dannix.net/lib/abode/stairs

That bit of decorative bullnose on the end is called a 'return'. If you haven't cut up all the treads you can return (no pun intended) some of them and buy treads with them already present. They cost about 4× as much, but you can buy them.

Cheapest thing to do would be to use a router with a bullnose bit on the overhanging edge to create the return.

You can go for using the bullnose from the waste. You've already got the material, and it's certainly going to match what you already have. it will require you to make a small miter cut on the outside edge of the stair, with another crosscut from the back to the endpoint of that miter cut.

Personally? If you haven't got the router, I'd go for buying the return molding on its own. It's only about $5 per 13" piece at the Big Orange Box (i.e. Home Depot) or eBay

Not the answer you're looking for? Browse other questions tagged wood woodworking hardwood-floor stairs carpentry or ask your own question.