Running wire to ceiling with double joist parallel to wall

I'm finishing my basement, done the framing and starting wiring for lights. One wall runs parallel to the joists, and has a double joist (two 2x8) above the top plate (the wall is right next to the stairs, running between several existing posts).

I want to put the light switches on this wall, but I'm not sure how best to run the wires. I can't just bore a hole straight up through the top plate due to the joists.

Alternatively I can run the wires to through the wall and then back to an adjacent wall and run to the ceiling from there. However, there is a 4x4 post in the corner between these two walls. Can I bore two perpendicular holes through that post to allow me to run the wire at the 90 degree angle?

Here is a rough schematic of the situation. The two walls are shown, with red marking the existing posts. The wall that runs between the posts is the wall that has the double joists on the top header. The desired location for the switch is in blue: 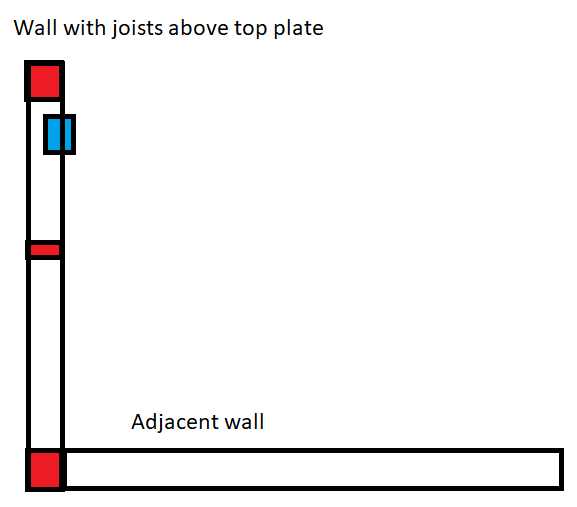 Here are a couple of pictures. The joists are painted black, so they're kinda hard to see, but the wall with the box in it has the joists running on top of it: 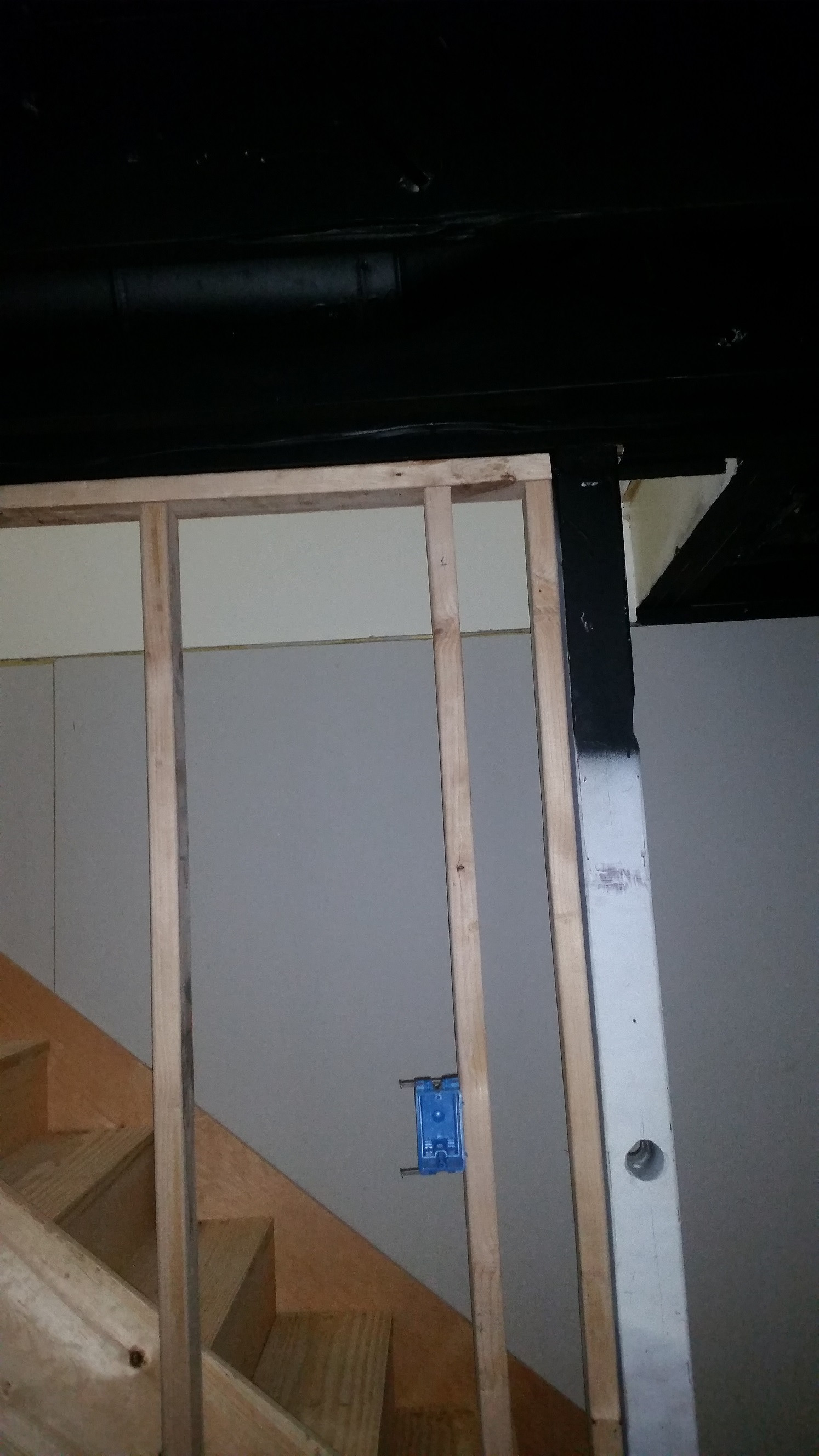 And this is the corner (with the 4x4 post between the walls): 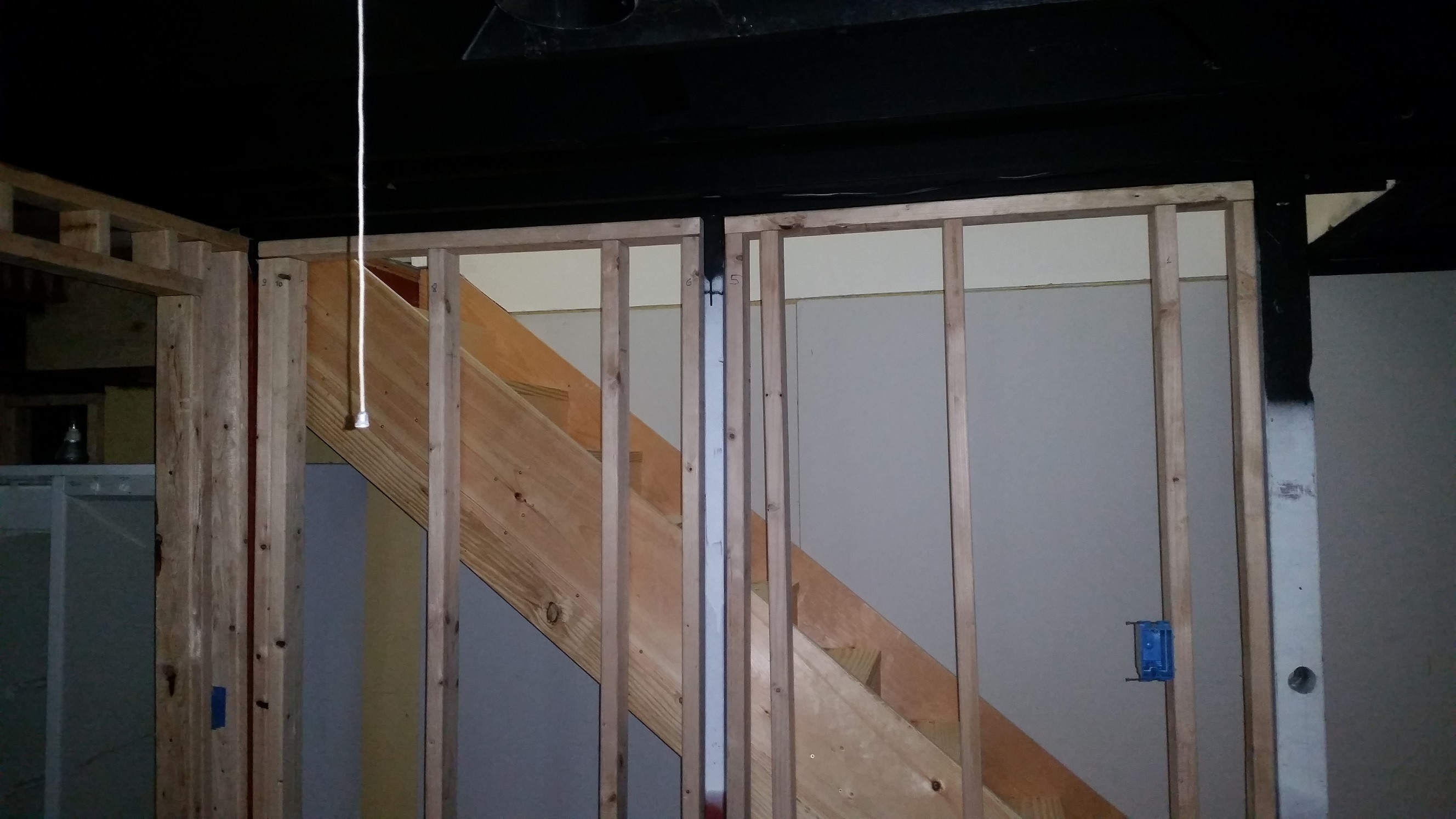 Would it be possible to notch the first joist, drill through the top plate close to that joist, run the wire through the gap and protect it with a nail plate? As far as I can measure the joist is 15' long, and this falls just under 5' from the edge, so should be outside of the middle 1/3 span. Is there any requirement for the height of the wire on the side of the joist?

Raceway exists for a reason

These types of problems are why we have raceway systems we can run on wall surfaces, or inside a wall for a ways then have pop out of the wall. So, instead of running NM and using a cheapie plastic NM-only box, run EMT or surface raceway for the switch loop (and just the switch loop, you can stop at the ceiling box and transition to NM for the rest of the circuit there) instead.

With the EMT option, some cleverness with a conduit bender could even get you to sweep 45deg out of the wall down a little ways from the molding then 45deg as it enters the ceiling finish. With some finish work, and some black paint appropriate for galvanized steel, I'm sure you can give it just that little industrial touch.

Of course, this means you need to use a metal box for the switches, but that's no big deal, right?

After explaining this to the AHJ, he proposed running NM in conduit around the back side of the wall. This took some creative bending (me being a first time conduit bender, at least), but the end result is solid and passed rough electrical inspection: 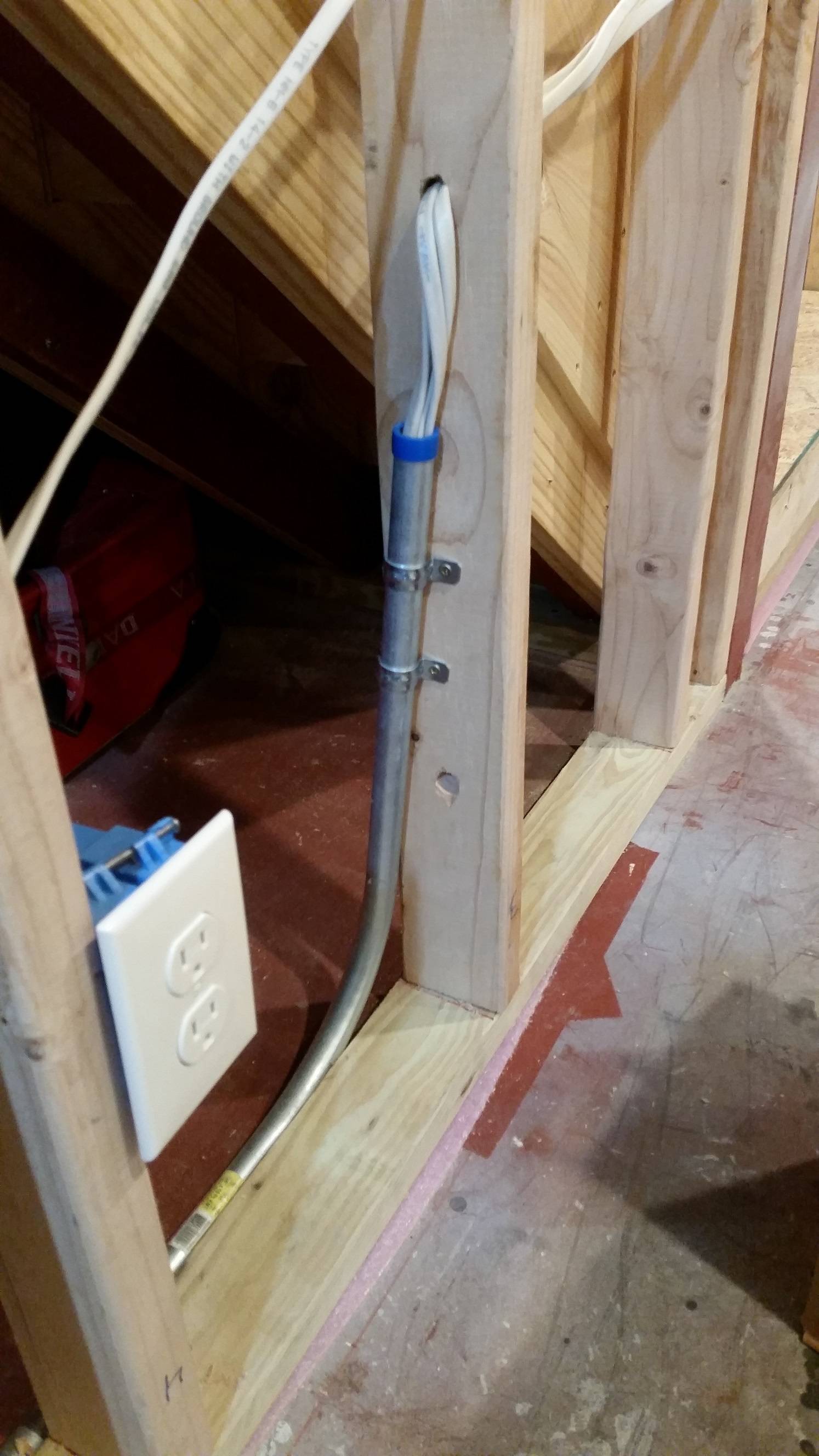 Can the wires run on the opposite side of the joists than the finished wall? If not I think you are going to have to build a small "box" in the corner to bring the wires down into the wall.

Not the answer you're looking for? Browse other questions tagged electrical wiring joists basement-refinishing or ask your own question.

11
How do I get to the wall cavity above a double floor joist from below?
3
Help running ethernet between floors, with double joists in the way
0
How to properly double on ceiling joists
3
Running wire through sole plate and joist at an angle
3
Is it OK to drill/notch an end joist (not rim/band joist) as long as it's continuously supported by a foundation wall?
42
How to reinforce a joist with plumbing running through it?
4
How to repair this split ceiling joist?