How to prepare concrete for epoxy floor coating when it's been repaired with a epoxy hole repair?

After taking our garage down to the studs to remediate black mold, and replace drastic termite damage, we intended to just scuff up the former owners concrete paint (I think now it was probably latex house paint) and concrete and put a epoxy floor coating (Rust-Oleum 238467 Professional Floor Coating).

When we went to scuff, the paint wasn't well adhered (easily came up in chunks with a razor blade) and we decided it needed to come off. So between a coating removal tool (Diamabrush) rental and chemical peal we pulled most of it up.

Unfortunately, also started to pull up the former owners attempt at a concrete repair. They had tried to bond concrete to concrete. We decided to remove that up too.

(Obviously looking back we did this all out of order. I should have realized the floor was in a poorer state than I initially thought.) 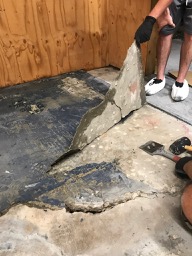 We can't afford to replace or resurface the entire slab, (extremely over budget already) so we sealed the crack with a two part epoxy crack sealer that indicated it was for wide cracks.

We are now working to fill the divots with the Rust-Oleum Concrete Patch and Repair Kit product (also two part). As we started to just fill the holes, smoothing them out almost made a coat over the entire area so we continued to do that. 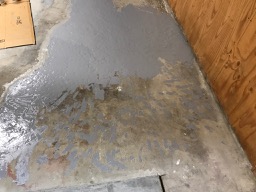 It's primarily going to be the side of the garage where there's shelving and I'm planning to go heavy on the paint chips to make it look less horrible. But I want to do everything I can to make sure the floor coating is successful and doesn't look too shitty.

Browse other questions tagged concrete floor garage epoxy or ask your own question.

2
What's the best way to fill in some uneven cracks in my garage and level it out so that I can paint over it?
4
How do I prepare a hole for concrete?
5
how to repair large, uneven crack in concrete floor
3
How to repair garage floor concrete damage near apron?
3
How can I repair this small hole in my basement floor?
0
Thicker epoxy rather than grinding concrete substrate to achieve smoothness
1
How to prepare this uneven concrete floor for tiles?