How can I catch more lint in my dryer?

In the 3 story townhouse I'm currently in, the contractor originally built the (stackable) dryer vent to go straight up from it's location (top floor), then when it gets above the ceiling, it angles up to vent out at the roof top. needless to say, this is very problematic as it requires regular cleaning. Is there anything I can do on the dryer itself to increase the amount of lint caught while drying so that I don't have to pull this thing out to clean the vent pipe behind it as often?

They sell inline lint traps, that can be installed along the exhaust vent. 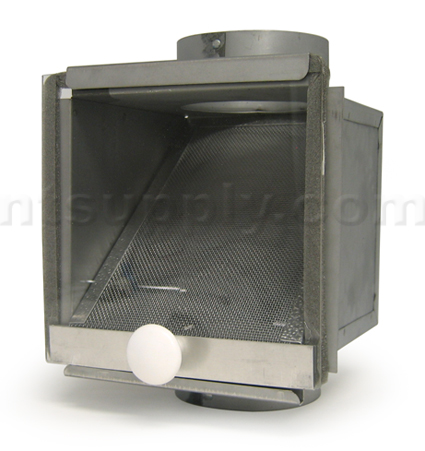 This should catch most; if not all of the excess lint, and give you a convenient easy way to clean the lint. The lint should be cleaned often (along with the dryers internal lint trap), to increase dryer efficiency and decrease the chance of fire.

Keep in mind, these are recommended to be used with a "booster fan" setup. If your exhaust line is longer than about 6' (1.8 m), you'll have to install a dryer booster fan to safely use one of these lint traps.

If you have a gas dryer, you may not be able to use an inline lint trap. Check with the manufacturer of the dryer, before installing a lint trap like this.

They sell products like this that have an open front, that "deflect" heat into the house. These are not a good idea, since they also "deflect" moisture into the home which can lead to mold and poor indoor air quality.

Not the answer you're looking for? Browse other questions tagged vent dryer ventilation or ask your own question.

4
How can I access the lint duct assembly of a Maytag Centennial dryer?
2
Can I clean my under-the-floor dryer vent?
2
Can I clean a second story dryer vent that goes out the roof from the inside?
3
Can I vent my dryer 'up'?
0
Dryer isn't drying clothes. I've tried all of the common solutions (I think)
3
Can a dryer exhaust through PVC in a slab?
1
My dryer isn't fully exhausting to the outside?
1
Need Options for Routing Dryer Vent
0
Replace inaccessible dryer vent