So I am trying to figure out if I can use a Wemo light switch. Wemo says you must have a neutral wire and it must be a single pole switch.

This switch box has three toggle switches. One of them is for an outlet, the second one is for turning on the fan/fan lights. The third one I cant figure out what it does. It doesn't control anything in the room. I suspect it may have been for controlling the fan lights separately from its lights. I can't confirm because when we moved in here there was no fan, there was only a fan fixture plate to cover up the ceiling. The person who installed the fan also didn't tell us if the light switch or fan was capable of having separate toggle switches for lights and fan.

I am trying to figure out if a wemo light switch can be installed even if there are two toggle switches that control lights and fan on a fan separately.

Secondly I am trying to also figure out which of the wires in wire nuts is the neutral wire I need to use for the wemo light switch. Neutral wires are suppose to be white. This condo was built in 1994 so is that still the case? Anyways, there are a lot of wires in wire nuts that are not being used.

Here is a picture of the switch box: 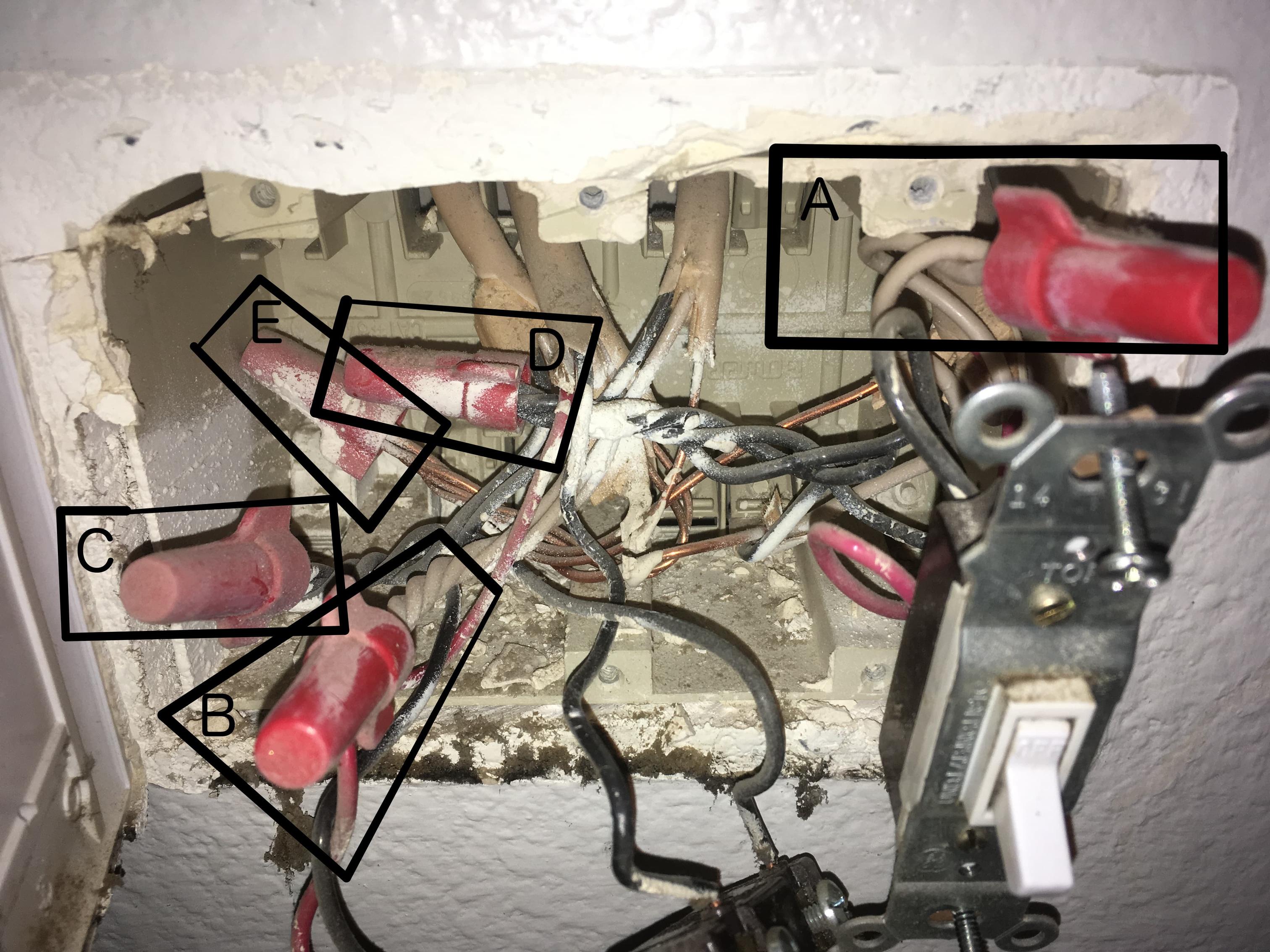 B is the same white'ish color as well

If both of those white ones are neutral, does it matter which one I use for the wemo switch? If it does matter, how do I figure out which one I need to use?

As for the copper ground wire in the pic, if it is indeed the ground wire should I go ahead and use it on the wemo?

I see 2 separate circuits in there. They all share grounds E, which is fine.

One is the three Romex's left of the "A". They appear to be mostly "always-hot" except for a switched (receptacle?) on the red wire on the leftmost switch. They use nuts B and C.

The other is the stuff on the right, partly obscured, and using nuts A and D. It looks like a power supply comes in the /2 cable, and a probably-light is connected to the /3 cable. Currently it's wired so the black is always-hot and the red is switched-hot.

Both sides are doing basically the same thing, delivering always-hot-black and switched-hot red to the /3. They are clearly demarced, except for nut D being in an odd position due to box cram.

Whichever circuit you are using the hots from, use the neutrals from that same circuit. Do not grab the wrong neutral, neutrals must be paired with their hots. Otherwise if/when you ever upgrade to GFCI/AFCI, you'll have serious problems!

Not the answer you're looking for? Browse other questions tagged switch home-automation or ask your own question.