I'm building a sandbox from playground border. It will have landscape screen on the bottom so it drains. Is it better to have a mesh cover just to keep out debris and critters or a waterproof cover? My worry with a waterproof cover is mildew/mold on the cover itself and making a dark cozy place for insects to take up residence and lay eggs (I'm ok with bugs, but I don't want to put up a welcome sign). My worry with a mesh cover is the sandbox becoming a lake when it rains and never fully drying.

If you are able to construct a waterproof cover which overlaps the edges of the sandbox, consider it to be of the same structure as a roof with eaves. Build into the design a bit of tenting or pitch. The underside of the waterproof cover would have a mesh material stretched over the surface when flipped upside down, an umbrella of sorts with a drum-head type of configuration.

When the cover is placed on the sandbox, the mesh would provide for airflow while the waterproof portion keeps the box dry.

A quick and dirty sort of design would be a child's wading pool, the hard plastic type. Window screen or landscape screen stretched around the perimeter provides the airflow, while the hard plastic gives the waterproofing. Of course, the pool would have to be a larger diameter than the sandbox and the rim may collect water unless that aspect is mitigated. 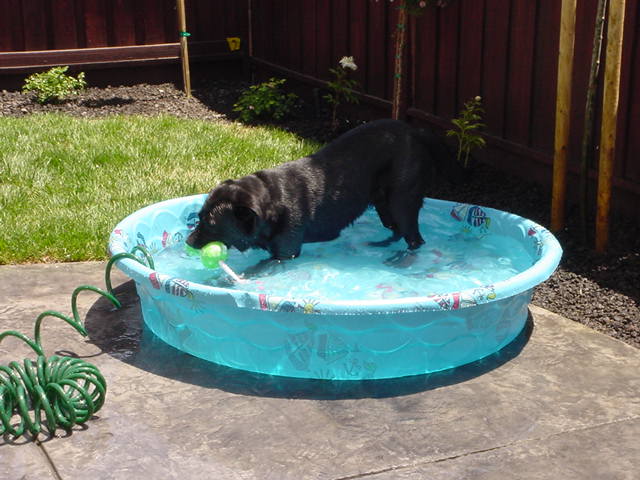 Every photo is improved with the inclusion of a cat or dog.

Create a frame of lumber slightly larger than the sand box. I'd aim for at least six inches air gap all around, plus the width of the lumber used. If the frame has legs at each corner and perhaps one or two in the middle, they would keep the main frame at the same level of the sandbox edges, perhaps an inch lower to cause the screen to remain in contact with the sandbox.

The screen material would be stretched across that frame, tightened appropriately when fastened. The waterproof portion can be as simple as a plastic tarp, large enough to cover the entire frame, plus a bit more, enabling the construction of a tent-like structure.

Triangles are going to be the lightest and strongest method to support the "tent" over such a large area. 8' x 12' feet is not a square (says Mr. Obvious) which means that you'll have a center spine or ridge, with an angled structure at each corner and maybe one each on the long sides.

You would not need great elevation, only enough to shed water, keeping material costs to a minimum.

If you used plastic sheeting in place of the heavier tarp, you could get away with using inexpensive 1" x 2" lumber, making the structure that much lighter as well. Stand the 1x2s on edge to get the stronger dimension in line with the greater forces. It would not hold up well to being tilted or stood on edge in this configuration and would require two people to remove and replace if constructed of this light lumber.

My apologies for the drawing below. Not the best program for the job, but too much work to use the sophisticated stuff!

The left part of the image is the top view, while the right side is a butchered view or one end. The side view would be a parallelogram and is left as an exercise to the reader.

Not the answer you're looking for? Browse other questions tagged play-structures or ask your own question.

3
What kind of sand should I use for a sandbox?
1
How to drain water from a plastic sandbox?
1
Using pressure-treated wood to make a sandbox
1
Roofing choice for outdoor sandbox cover