How do I install a single-pole switch w/ pilot light?

I am trying to replace a very old one-way switch with a pilot light (light comes on when the switch is on). The original switch was extremely old, and used quick-install terminals ONLY. Even worse, whoever installed it shoved both hots into one port, and both neutrals into another port. None of them were labelled, and there were no colored screws to go by.

I shut off the power, cut the old wires, put on some wire nuts, and have ID'd which romex is the line and which is the load. Two romex cables come into the box, so I have 2 neutrals (white), 2 hots (Black), and 2 grounds (bare copper).

The switch I am trying to install has 3 terminals as shown below, excluding the ground.

Now the issue I'm running into is the wiring diagram doesn't make any sense to me. I have attached it below.

What would make the most sense is that the silver terminal would take both neutrals, and the brass would take the load side hot/black wire. Then the common port (WTF do they call it common in this instance? Common is only used for 3 way switches I thought) would take the hot line cable. I did this, but the pilot light would not shut off, and the light in our attic wouldn't come on, so that is wrong.

When you forego the neutrals by splicing them together and leave the silver terminal disconnected, the light in the attic works, but the pilot light does not work. So, that isn't right either.

I then tried to wire both hots to the same terminal, and both neutrals to the silver terminal (as was done on the original) and when I turned it on it killed the breaker. At this point I am lost, so any advice would really be helpful. I was hoping to get this done before I lose daylight since there's no way to get another light in the room and I don't want to work by maglight :) Sadly Leviton's tech support line is open craptastic hours so calling them isn't possible. 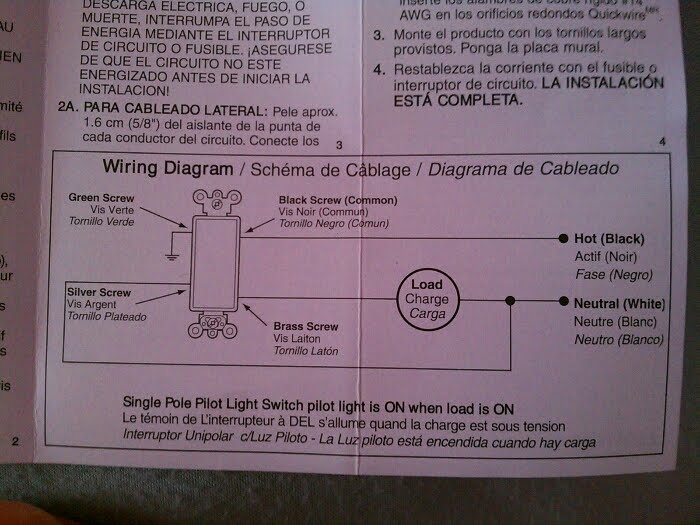 So, after some further fooling, I rewired it again as I did the first time (with a pigtail going from the neutrals to the silver terminal), the hot line in going to the top right black terminal, and the load going to the bottom right brass terminal. I turned on the breaker and again, the pilot light is on 100% of the time, whether the switch is in the on or off position. So, I then swapped the hot line in, and the hot load out, and turned back on the breaker, and it now works properly. So, it looks like the directions are SORT OF correct, but Leviton put the line in where the load out should be, and vice versa. Basically what they say should be connected to the black screw should be on brass, and brass should be on black (still a DIYer, I never know the proper names for these things). I hope this helps someone else who buys this same switch.

This switch has the third terminal because it is illuminated. Basically, when the light is turned off, the switch needs power to light up the pad. In order for this to work, there needs to be a neutral so that it can complete the circuit without sending power to the light.

EDIT: I see this switch illiminates only when it's on, not off. I believe the below in instructions should still hold true.

The switch should interrupt the hots (black wires), but be in parallel to the neutral (white). So you should have both neutrals from line/load wired together with a pigtail going to the silver terminal of the switch, and then one black wire on the black screw and another on the brass screw.