I had a new roof replaced recently and my whole house would shake when they would throw the shingle bundles down on my roof. I went to the attic the next day and noticed something I hadn't previously. 2 of my roof rafters had a split in the wood. The split is length wise extends the entire length of the beam.

I showed this to my roofer and he laughed and said it was "checking". He tells me there is no way that his guys could have done this.

So a couple questions: 1.) Is this really checking or could the roofer have caused the damage? 2.) How big of a deal is this? Do I need to get it fixed? 3.) How do I fix it? Or more likely, who do I call? A general contractor? Another roofer? 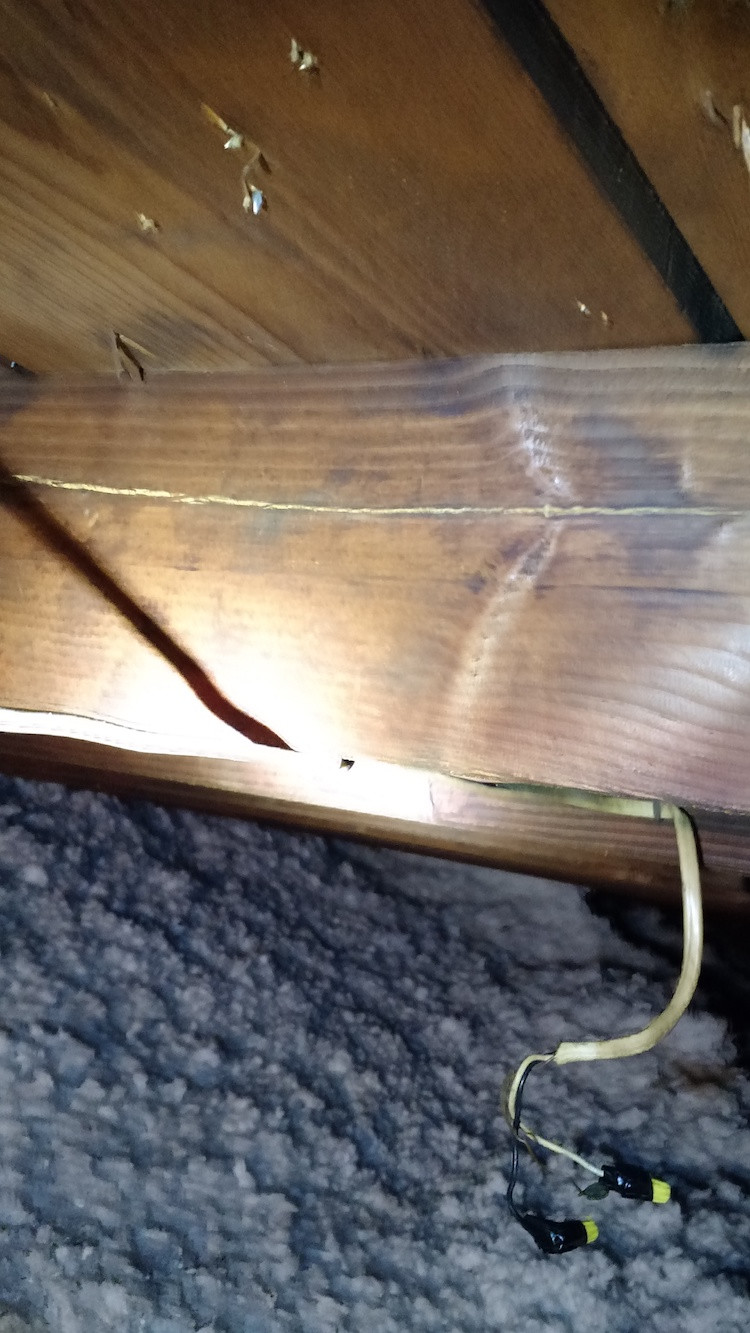 That crack is not checking. It's called "double bending" resulting in "horizontal shear failure".

Truss chords do not react to loads like joists do. Trusses are designed with each chord in tension OR compression, but NOT both. When the roofers dropped the bundles of shingles, (or worse, when they stacked the shingles in a concentrated area,) they put the chord in double bending. That is to say, they made the top chord bend. When this happened, the top half of the chord is put in compression and the bottom half is put in tension. This action increases the allowable compression and causes "horizontal shear failure"...tearing the wood fibers horizontally along the length of the wood chord.

Now, just because the chord has failed in horizontal shear, doesn't mean the truss has failed...especially because it is being held in line by the plywood nailing. The key to the TRUSS failure will depend on how the crack ends. That is to say, does the crack end in the middle of the chord, or does it veer off to one side (top or bottom) of the chord BEFORE it reaches the end of the chord. If so, you have a major problem.

I'd suggest you contact a STRUCTURAL engineer (not a CIVIL engineer) and have him review it.

So, I'm curious. Does the crack end in the middle of the chord or not? If not, does it veer up or down?

Yes, checking is common and doesn't usually compromise the strength of a board. That crack appears new due to the bright color of the newly-exposed wood. However, I see no reason for concern, especially considering the robust solid wood deck you have, which effectively spreads load to adjacent rafters.

Now, any "professional" who laughs at your questions shouldn't be called upon again. You don't know whether other issues you may raise will also be dismissed with such rudeness. They also should not have been dropping bundles on your roof if only as a measure of respect. It certainly is unpleasant, and it dislodges dust and can crack drywall or plaster.

Not the answer you're looking for? Browse other questions tagged wood roof framing roofing lumber or ask your own question.

3
Dimensional treated yellow pine lumber, non-standard widths?
1
From metal roof to composite shingles, mold and water issues?
6
Was this part of roof and eaves done right?
1
Is it normal for frost to accumulate on nails in my attic?
3
Is it typical for a roofing contractor to inspect roof framing and quote repairs?
2
EPDM Rubber Bond Roof in multple pieces
0
How to fix sagging timber roof trusses?
2
Covered deck roof beam support at house