What's wrong with this wiring?

Something is wrong with the wiring in my shed, I think. I'm pretty sure that it's been wrong since the previous occupants lived here, and maybe even earlier than that.

When I moved in there was clear evidence of scorching in the shed - apparently something had melted and caught fire. I'm sure it was a rather exciting time. I replaced the damaged wiring and the receptacles, but when we were trying to wire things up correctly we could not figure out the correct order of the wires. It doesn't help that they're all gray wires. We spend a lot of time scratching our heads and puzzling, and then I realized that at most we had 6 different combinations, so we tried each paring and finally figured out that at least one of them was ground, but we still couldn't figure out which was hot and which was neutral. So we just wired things up and the only thing I plugged in was an incandescent lightbulb.

Recently I've thought to revisit the shed wiring and have discovered something that seems rather strange. Between ground and one side, I'm reading ~240v, and ground and the other side I'm getting ~120v.

I'm not sure what they're supposed to read, but on another outlet between ground and neutral I don't get any reading, and ground and hot I get 120v.

120v Between Hot and Ground 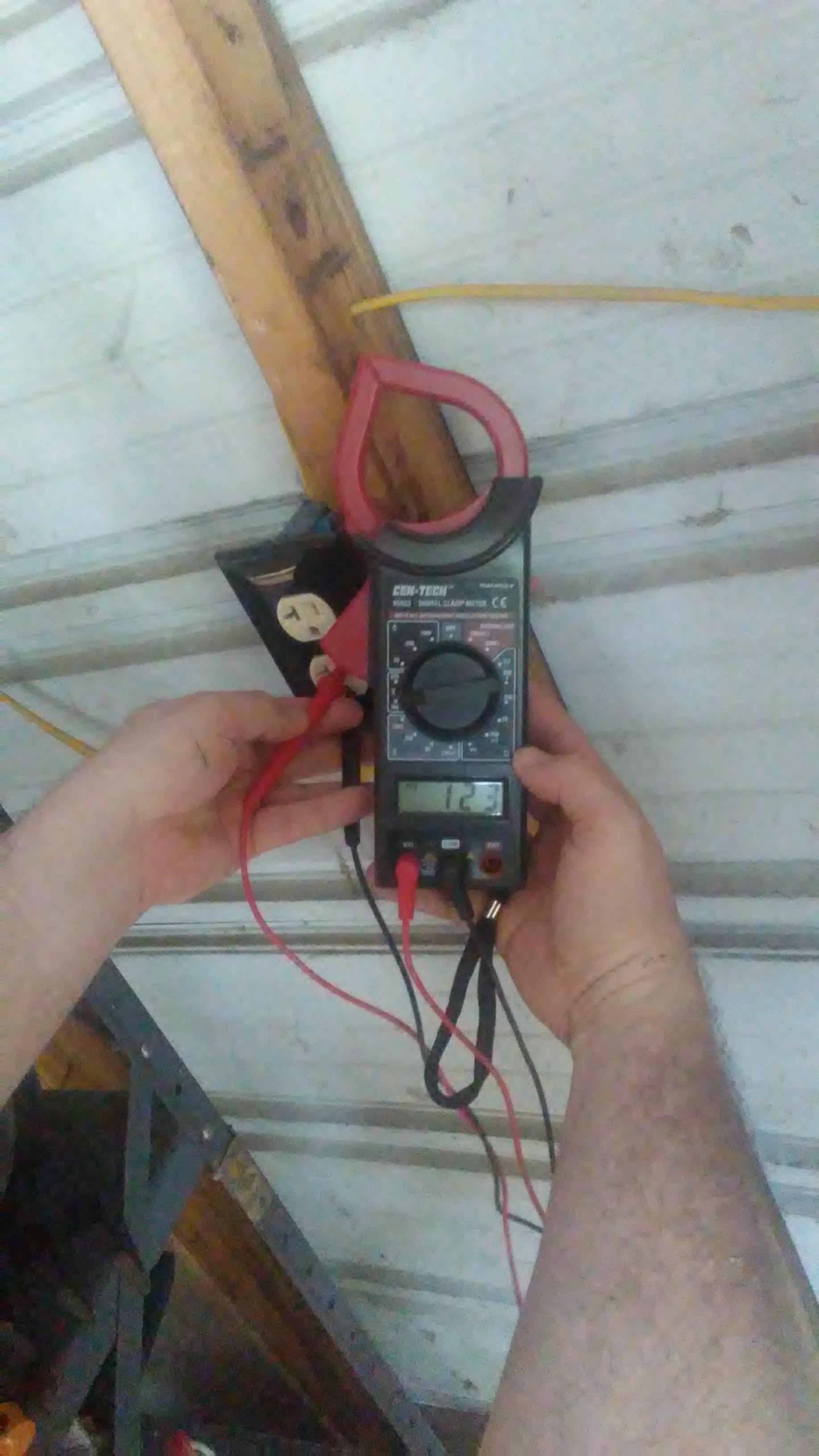 240v Between Neutral and Ground 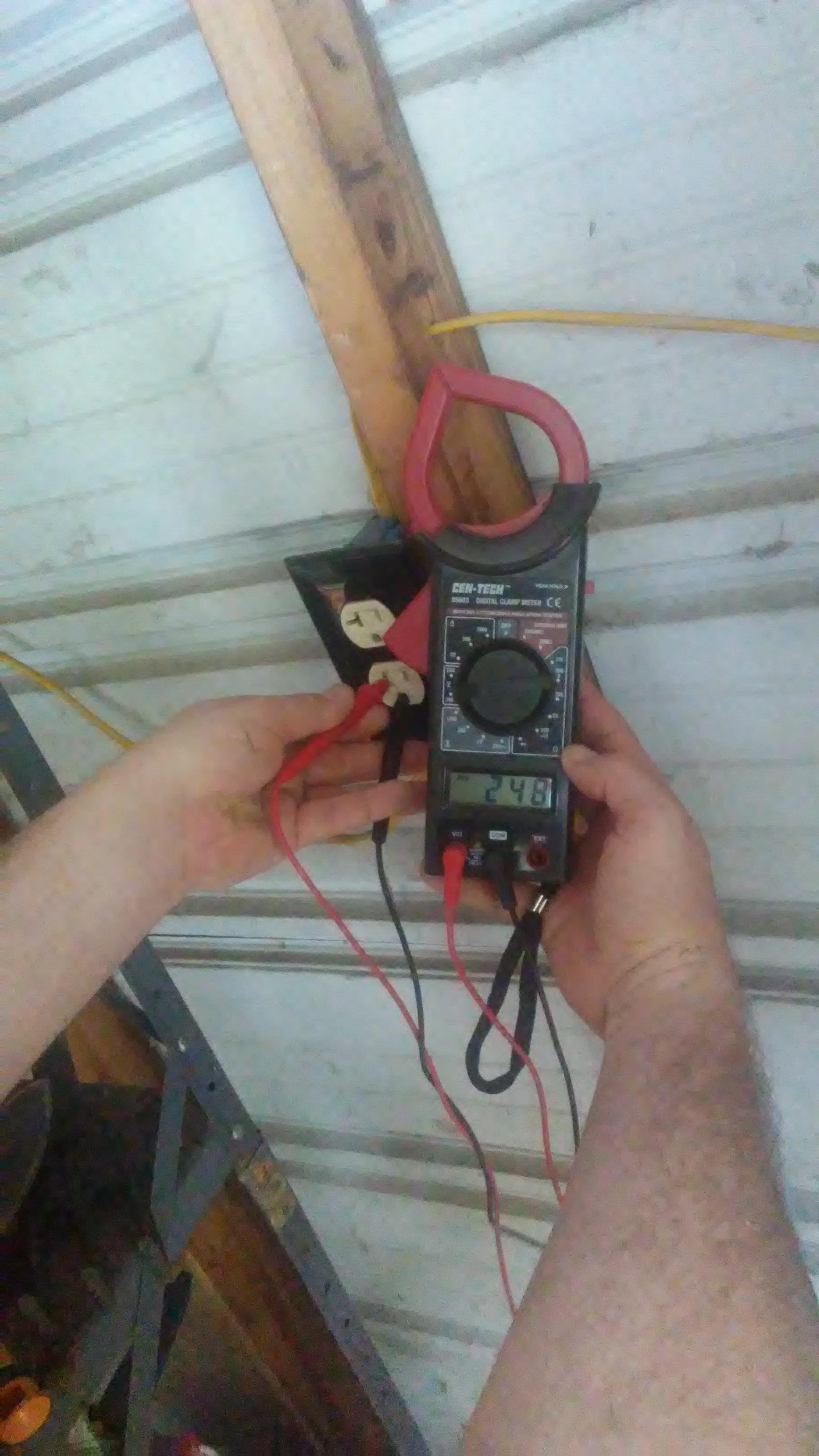 My Dummy Light is Confused, Too 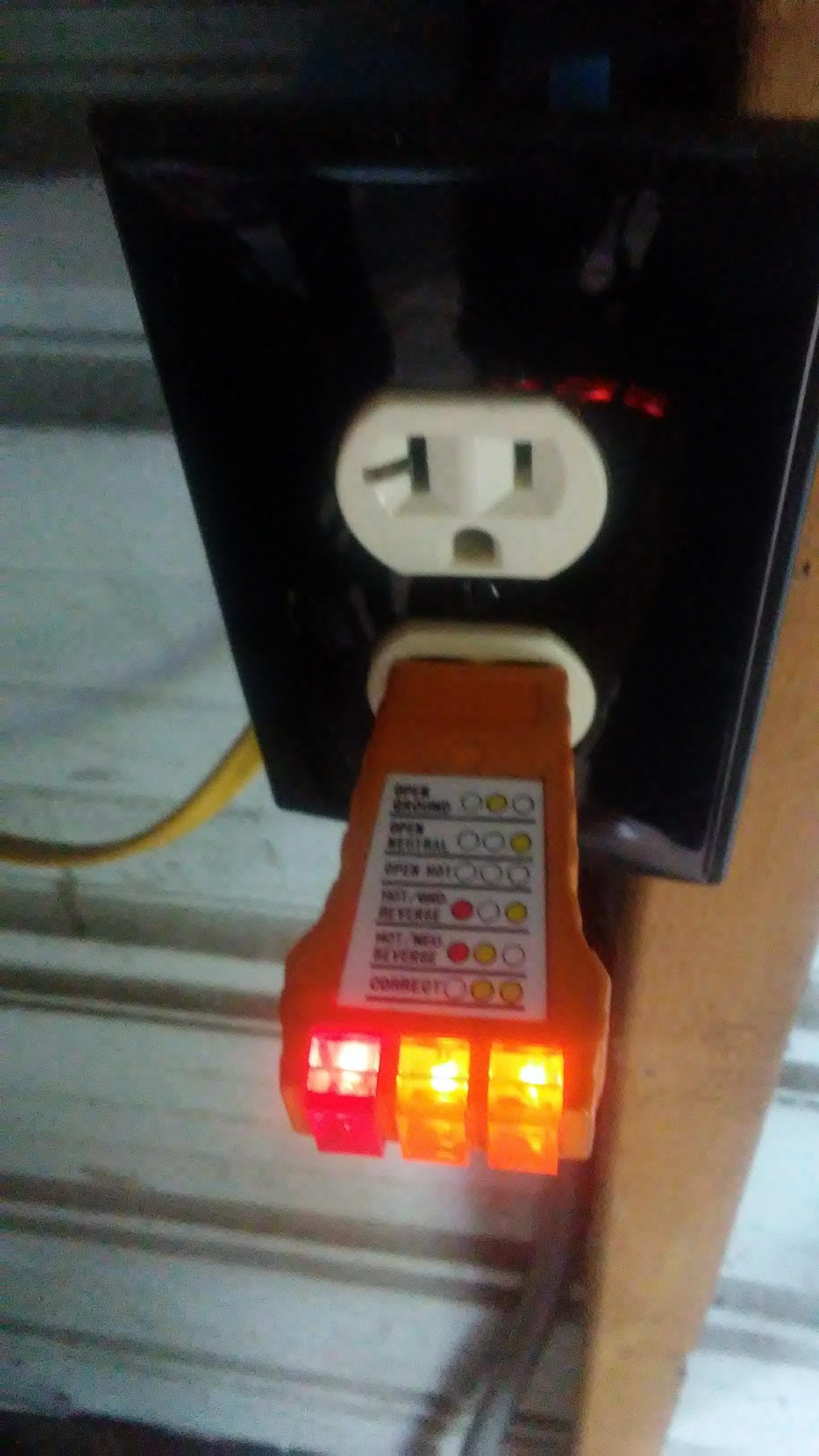 You may not be able to see the label clear enough, but my dummy light has all three lights on - but that doesn't correspond to any of the options on the label.

So I'm terribly confused as to what's going on here. How would I find and fix the issue here? I'm assuming it's probably in my circuit box - I took it off once before, so I know where it is and a little about it. I don't have the option to shut off the mains electricity to the house, so if I were to undertake such a fix, what safety precautions should I take? (If the outlets don't make it clear enough, I'm in the United States)

Inside My Breaker Box 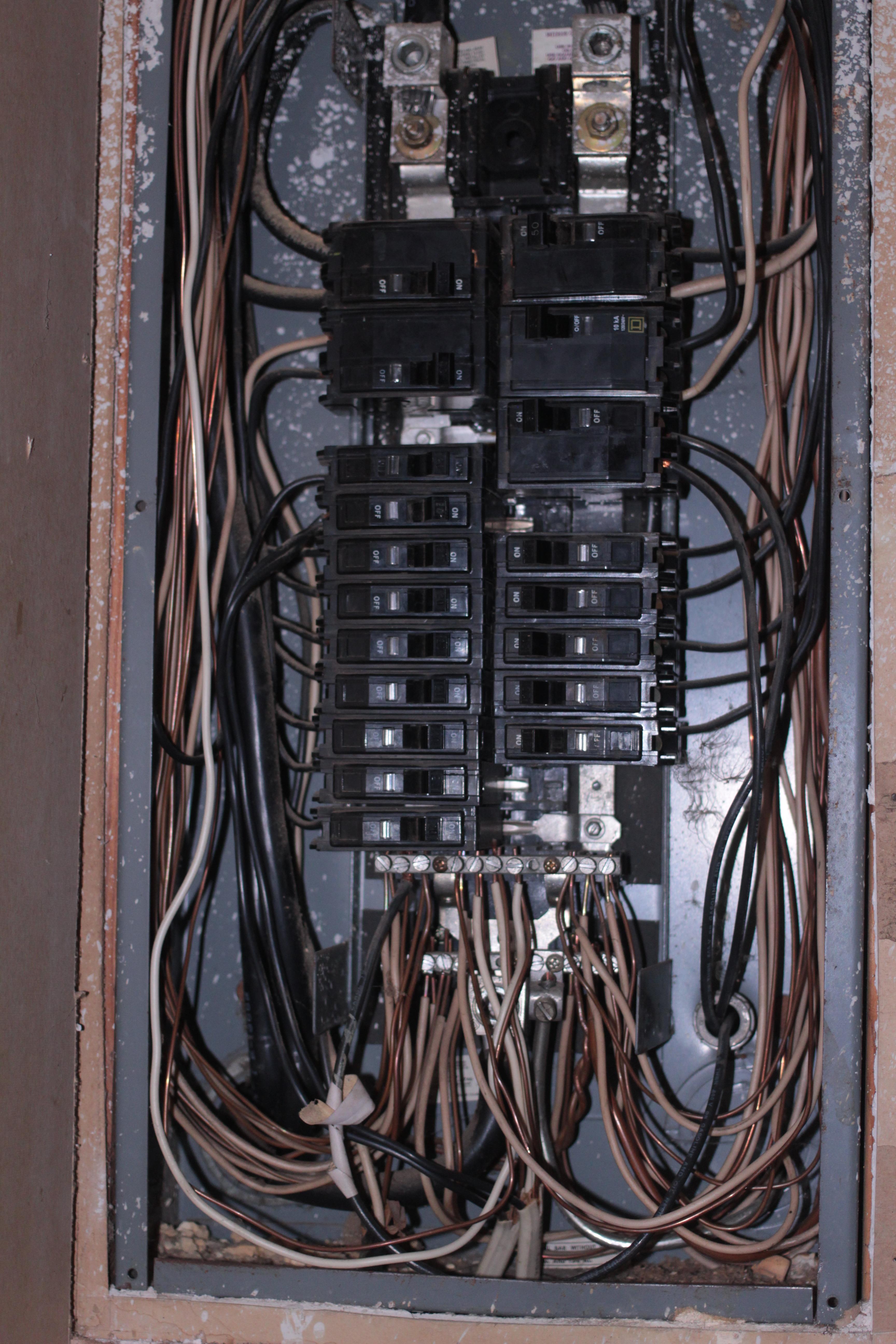 On the right side you can see three wires coming in through the back of the box: they go up to the 20A circuit breaker on the right side and to the ground rail - those are the wires that go out to the shed.

As-wired, the three wires are Hot, Hot and Neutral. You do not have a ground wire, (unless this run is in metal conduit, in which case the metal conduit is the ground path.)

A 120V receptacle has 3 wires: Hot, Neutral and Ground. Your conceptual problem is you are trying to match 3 wires to 3 wires. And that will never work because those 3 wires have different functions.

First, sort out the Ground question.

Look closely at the conduit carrying the wires. I assume it is conduit because I see 3 loose wires same color. If indeed the conduit is all-metal, and continuous, and joints in good condition, then you have a ground *in the conduit" which should be accessible at the metal box attached to the conduit. It should have a hole tapped 10-32 that you can put a grounding screw into.

You might have an electrician test this believed-to-be-ground path to see if it can really carry a strong current flow. To be actually useful, it must be able to flow enough current to assure the circuit breaker trips.

If you do not have a viable ground path, or if you want "belt and suspenders", you can retrofit a ground: route a copper ground wire from the shed back to the house, via any legal method. If it is indeed in conduit, you might be able to just fish (or even push!) the ground wire through.

The last option is to simply leave it ungrounded. Toss out those NEMA 5 (3-prong) receptacles and buy NEMA 1 (2-prong) receptacles. This will be allowed if the wiring is old enough to be grandfathered (i.e. was installed before grounds became law). If you do this, I strongly recommend you replace the circuit breaker with a GFCI type.

Here's what you can't do: Grab some green tape and mark one of the hot wires as a ground. It is now illegal to remark a black wire (of this size) as a ground. A ground must be green, green/yellow stripe, or bare.

A local grounding rod is no substitute

If this were any more sophisticated, you would need a local grounding system (rods) at the shed. You don't because this is a single (multi-wire) circuit into a single breaker. Here's the point: Do not use a grounding rod as a substitute for a ground wire. You need a ground wire back to the panel so that ground faults will trip the breaker. A ground rod won't do that because dirt is just dirt, it is not a magical superconductor. Dirt conducts electricity about as well as you'd expect, and it won't flow enough current (if it flows any at all) to give you a reliable breaker trip.

So don't even think about using a local grounding rod at the shed as a substitute for running a proper ground. It is a nice add-on, though: what it does is give a very direct path for Mother Earth's electricity - lightning and static electricity - to get back to its source.

Then sort out the Neutral

I see in the service panel where one of the black wires has white tape on it. Similar to green tape, it is now illegal to re-mark a black wire (of this size) to be a neutral. If the installation is old enough it may be grandfathered, and I would take the assumption that it is. In that case, it's OK to use new tape to freshen the mark, as that one is falling off.

It's important the mark be intact on the other end of the wire too. Freshen it there too. It's vital not to get the wires mixed up.

You have Hot-Hot-Neutral. Use it that way.

What you have is called an Edison circuit or a multi-wire branch circuit. This can give you 240V (hot-hot) or 120V (hot-neutral) or 120+240 (hot-neutral-hot) for dryers or subpanels which use both.

If you want a 240V circuit, use the two hot wires. This could go into a NEMA 2 receptacle (or if you have a good ground you can wire, use NEMA 6).

Whoever wired this circut last left you with a boobytrap on your hands -- one of the black wires is landed to what appears to be a subpanel ground bus, and the other two wires land on the 20A double pole breaker on the right side of the panel. Hence, the circuit is a 240V circuit -- you won't get right results no matter what you do with hooking the existing wires up to that receptacle, because it's a NEMA 5 receptacle and only meant for 120V service.

You'll need to re-run the ground wire with a green wire no matter what; other than that, you can replace the double pole breaker with a single pole and one of the other black wires with a white wire to get a 120V circuit, or put NEMA 6s and 240V LED or fluorescent fixtures in and keep your shed at 240VAC provided all your loads there can run on 240V.

It appears you have two wires connected as hot wires that are connected to the neutral and ground of that receptacle. Hence the 248 volt reading.

Re-check your wiring and verify each wire individually from the panel. Make sure they are terminated where they should be.

Do NOT plug anything into this receptacle to test it until you straighten this out.

If you have a difficult time with this call a reputable electrical contractor to correct this issue before something burns down or someone is hurt.

3
Why doesn't my electrical service panel have a main disconnect breaker?

5
What is wrong with this panel wiring?
1
10-50 to 6-50 wiring
0
Light fixture measuring 120V for both hot and neutral
1
Wiring help needed
2
Is there anything to be concerned with this picture?
2
What's wrong with the wiring in this light switch box?
2
Why would I have i lost one leg on 240 after maintenance guy changed 100 amp disconnect at the meter
0
Confused by outlet wiring and switch wiring
2
Outdoor circuit loses power - breaker does not trip, other lights in circuit keep working