Something wrong with electrical outlet or outlet installation?

I installed an electrical outlet using the same line that feeds an mini-split A/C.

Once I installed it, I tested it with a regular electric drill that I have. The weird thing is that the electric sparks coming from the drill are much stronger that with any other outlet in the house. The drill seemed to have too much power. I was worried the drill was going to burn out.

With any other receptacle, the drill shows minimal electric sparks. 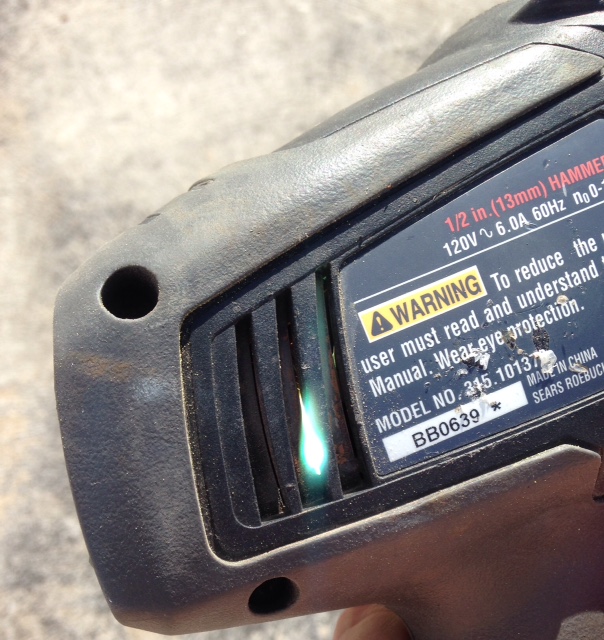 What could the issue be?

There are many reasons not to "tap" random lines going to fixed appliances.

Indeed, since the tool performance is not as you expect, you have assuredly tapped a 240V line.

One of the problems is that in residential wiring, they often use /2 cable to wire the 240V appliance. In /2 cable, one of the wires is white, that is simply how /2 cable is made. It is allowed for 240V circuits if the ends of the wires are re-marked a color with tape or paint, however that is often skipped because the use is "obvious" (e.g. going into a 240V breaker or to an appliance whose nameplate plainly says 240V). In any case, that marking won't exist mid-cable so you don't get it if you tap it. Don't tap cable.

As R.M.E. notes in comments, even if you figure out how to get 120 off a 240 line, you are drawing unevenly. And you might also have to bootleg ground to do that. Bootlegging ground renders unsafe your entire grounding system - all through the house.

#2 there is no legal/safe way to "tap" cable

The proper way to tap a length of cable is to add a junction box where needed, cut the cable 10" past the entry to the new box (leaving the other cable 10" short) then either replace the short cable entirely, or install a second junction box 20" away simply for the splice. Obviously this includes a strategic choice of which half of the cable to replace.

There is no legal way to tap cable that doesn't have 18" of slack. So you are doing something seriously horky and hacked.

Even a temporary inline tap means you have torn away the insulation. You are not allowed to then bury that now-damaged cable in the wall.

When you have a large hardwired appliance like a water heater, stove, air conditioner, etc. on a dedicated circuit, that circuit is usually sized to supply that appliance alone. Suppose you have a 15A air conditioner. It must be derated to 125% for a continuous load, so 18.75 amps. That on a 20A circuit leaves only 1.25A to spare. It could run an LED porch light, that's about it.

Further, if the hardwired loads are more than half of circuit capacity, you are not allowed to put receptacles on the circuit at all.

#4 It may not protect your socket (too large a breaker)

Often, a dedicated line is a larger amperage (i.e. 30A) that is not legal to connect a common 15/20A receptacle.

Even worse, as Ed Beal notes in comments, the breaker/wire combination may have been engineered for a specific load. It is not properly protected on a different load.

You use "permanent" wiring methods so the appliance is no longer connected, and your receptacles are. If it's on too large a breaker, or the wrong voltage, you also move the wires to a correct sized breaker.

When you're all done, you rewire it back.

For instance I needed to hook up a 240V heater temporarily. It is listed to install on a 30A circuit. I followed the A/C cable (which fortunately was in conduit) and found an intermediate junction box, where they had graciously left me 18" of slack. Snip. I capped the wires to the A/C unit. Then I spliced the wires from my heater into the supply (10AWG since it is a 30A circuit). When I was done, I removed the heater cable, capped the knockout, and re-nutted the supply wires back to the A/C.

Most air conditioners are 240V, and a 120V receptacle on a 220V line is a code violation, dangerous, and probably going to fry most things you plug into it.

If the breaker you turned off to install the power is a double-pole, that means it's a 240V circuit.

You can also tell by using a multimeter and testing between the two wires. A correctly-wired circuit will read:

In your case, if it's 240V you actually have two hots and no neutral, and you'll read 240V between the two hot wires and 120V from both to ground.

2
20amp breaker trips with NO load…Continuity between black & white wire at electrical box
1
open neutral or something else?
1
Electrical outlet right above sink
2
What to do with a new duplex outlet when the tester says Hot & Ground are Reversed?
2
Damaged oven plug, possible unsafe installation
1
Smoke and Sparks From Circuit Going to 6 Wire Outlet?
1
Electrical outlet installed by previous owner had Black and Green wires wired together
1
Outlet tester results for open ground on mixed circuit
0
150 volts at outlet?