I have a two story apartment with only one room upstairs and an access to a terrasse (it's kind of a closed mezzanine). I noticed that even when every window in the apartment is open, the room upstairs still feels stuffy. I believe it might be because there is only one window upstairs and it's not even in that room so the air upstairs just doesn't circulate well.

Hence my idea to install a vent/extractor (bathroom style, maybe more silent) blowing air from that room into the attic in order to get some air flowing upstairs. I know it's bad to blow humid air from a bathroom into an attic but this is just a regular room so I wonder if it would be okay (attic is well ventilated, we even asked the contractor to add more vents up there last time they did the roofing). I would probably only use it in the summer since the point is to ventilate better instead of using the AC. We get cold winters here (Montreal) so I imagine that blowing air in the winter would create condensation which would be bad.

Here is what the apartment looks like. The orange square is a patio door, green rectangles are roof vents and the red arrow is where I want to put my fan. 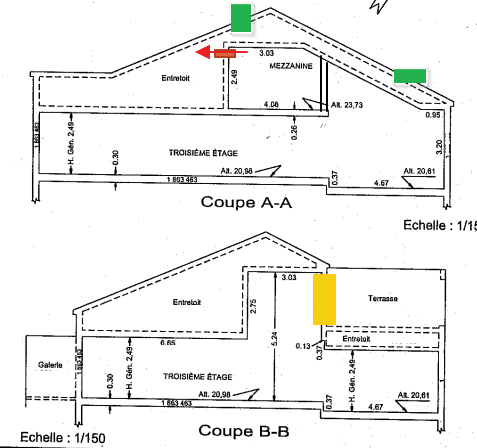 what do you guys think? Stupid idea? Anybody has a better idea?

Bathroom fans move a trivial amount of air. It's enough to exhaust some of the highly humid (or "aromatic") air from a tiny room like a bathroom, and it's low enough for the air to be replaced through general air leakage (and you typically don't run the fan for long). If all you're trying to do is turn over the room air a little so it doesn't seem stuffy, you will probably want to size it equivalent to what a bathroom fan does in a bathroom.

The general guideline for that sizing is to replace the room air at a rate of 8 times per hour. For an 8 ft. ceiling, that's 1 CFM per square foot of room. That's length x width x height / 8 = minimum fan CFM rating.

There are a couple of considerations for condensation. It isn't a summer issue, but if you put this in, you should design around the possibility that it could be used in the winter.

In the winter, the normal inside air is likely to be a lot more humid than the outside air in Montreal, so excess humidity may condense. Hopefully, any condensation will be in the form of a cloud, like the moisture from your breath outside, and the air current will dissipate it and/or exhaust it through the roof vents before it collects.

I assume you aren't in a position to install a dedicated roof vent. I would still duct it to the general vicinity of the close-by roof vent, and just secure the end of the duct so that it exhausts near the vent.

The other consideration is something I ran into with my own house in Virginia, and our winter temperatures aren't anywhere as low as Montreal's. In an unusually cold period, humidity from a bathroom fan condensed at the roof vent (which is metal). It collected as water, flowed back down the duct, and dripped out of the bathroom fan (a form of Chinese water torture for anyone sitting on the throne). If you use an insulated duct, you aren't likely to run into that.

Your idea should work. I cut a hole in my garage ceiling, installed a 20"X 30" air return grill and filter, built a 48" tall box above the hole and installed a fan blowing positive presure into the attic. My idea was to save money on my power bill during hot Arizona summers. I have not seen savings for the Air Conditioner, but the fan draws air through a window in the garage and keeps it from becoming hotter than outside temperatures. I know the fan is helping because it is running a lot and the cost of it has been offset by the reduced AC load. The AC unit is not running as much, and the blower unit in the attic is not as hot, both of which I think are long term beneifts. The biggest benefit however is the fresh air and cooling of the garage. I have discovered other benefits not related to this question, making me wonder why this is not standard practice.

I'm not sure an electric exhaust fan installed in that room will do what you want it to do.

Currently, the problem is that when you open the windows the air has no way to blow into and through the room. It's sort of like blowing into a straw with your finger over the other end. In order to have fresh air blow into the room, you need a way for stale air to blow out of the room.

Likewise, when you install an exhaust fan in the room, you need "make-up" air in order for it to bring in fresh air. In order for the exhaust fan to work, you'd need to open a window too.

All houses have positive and negative sides to the building, depending on which way the wind is blowing. Adding a relief grille (with backdraft damper) will work when the wind is blowing the right way. When the prevailing wind changes and blows the opposite direction, it won't work so well because the relief grille will close and try to keep the air out.

Maybe a window is better and will provide a means of egress if it's being used as a bedroom.

Not the answer you're looking for? Browse other questions tagged air-conditioning attic ventilation temperature or ask your own question.

0
Gable Vent Fan to Make Usable Attic Storage Space - Useful or Trouble?
4
Is there any reason (code or otherwise) to not vent one room into another?
1
How to deal with the trapped air in a loft attic?
0
How to get cold air from one room to another
0
Do we need a gable vent, and in either case, how to vent bathroom fan outside (can it be via the gable)?
7
Letting fresh air through a window without letting noise in
0
Is it beneficial to have a gable attic fan even though it's not attached to an external vent?