Can we safely hang a ceiling fan from our vaulted livingroom ceiling?

We have a tiny 1920's bungalow that's changed shape over the years, and we'd like to add a high efficiency ceiling fan to our living room in to replace an existing (lightweight) chandelier. The ceiling in this room was vaulted by a previous owner, who apparently built a soffit directly on top of the sloped drywall presumably for the sole purpose of wiring and hanging said chandelier. The small metal electrical box is definitely not the fan-supporting variety, and I'd ultimately like to know if we can safely add one without major structural and drywall work. 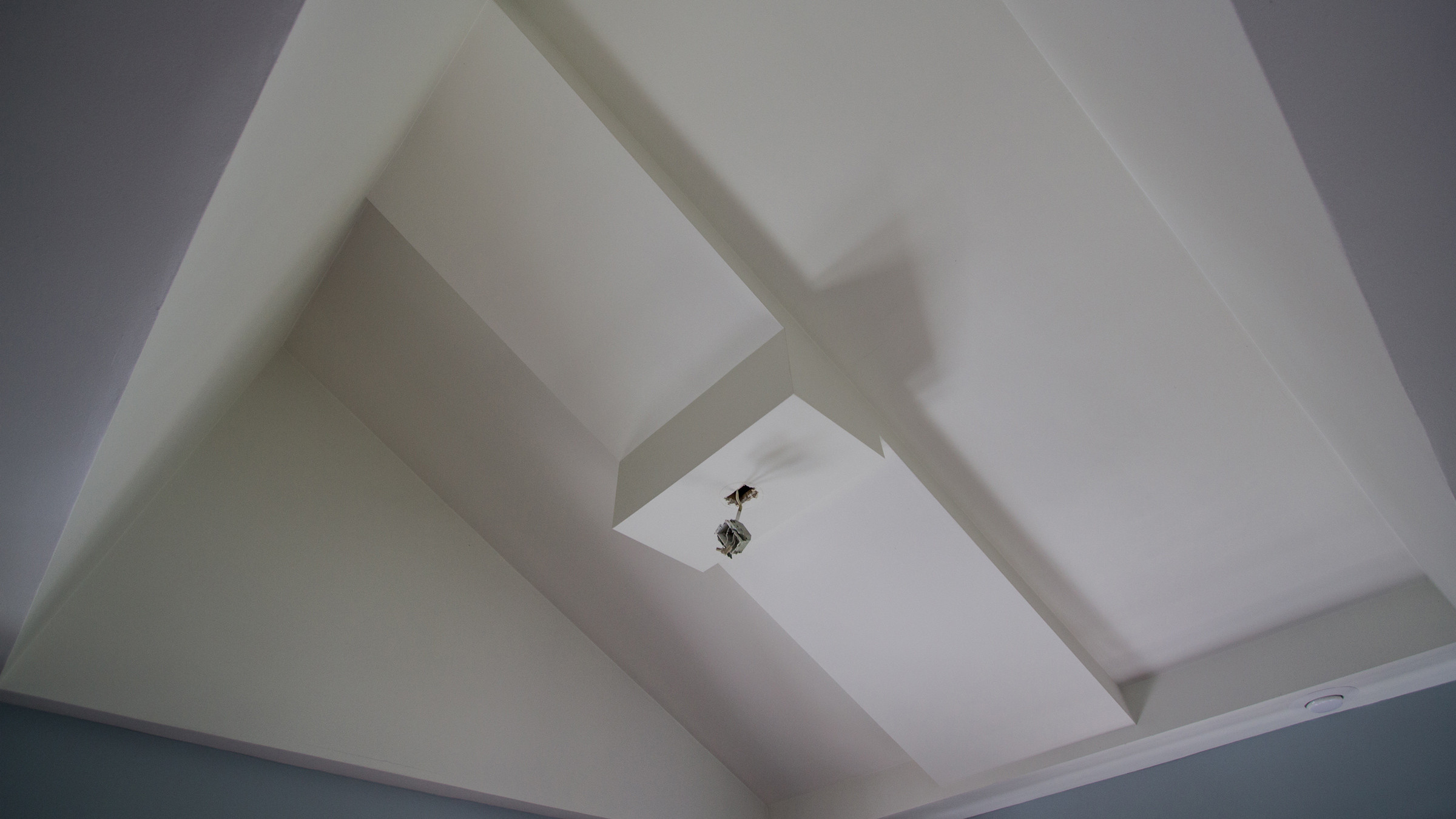 The entire ceiling was vaulted to match the roof line, with the drywall presumably fastened directly to roof joists. (We can't confirm this without taking off the roof, but it seems like a sound assumption.) I liberated the little electrical box and stuck a cheap USB snake camera into the soffit, which is how I learned that it was built on top of (lowered from) the larger drywall section. More critically, it seems that the soffit is built off of 2x4's that were affixed (screwed/nailed?) to the ceiling as a base for hanging the drywall with a patchwork of small plywood pieces, screws+nails, and miscellaneous small trim pieces. If there's a code for this, it's unlikely that it was followed.

I wasn't able to confirm how and exactly where the long 2x4's are affixed to the drywall, but I assume it's nailed and screwed into joists at reasonable intervals given that the soffit continues to stay in place and doesn't show any signs of stress or cracking in the four years we would have noticed.

The entire house is filled with inaccessible mysteries like this, and we're wondering in this case what we'd need to safely hang a 15lb (with mount) ceiling fan that draws 1.95-21.14 watts depending on its speed. Fan boxes can apparently be retrofitted to studs, but I'm not sure that non-structural 2x4's attached to drywall qualify as studs. 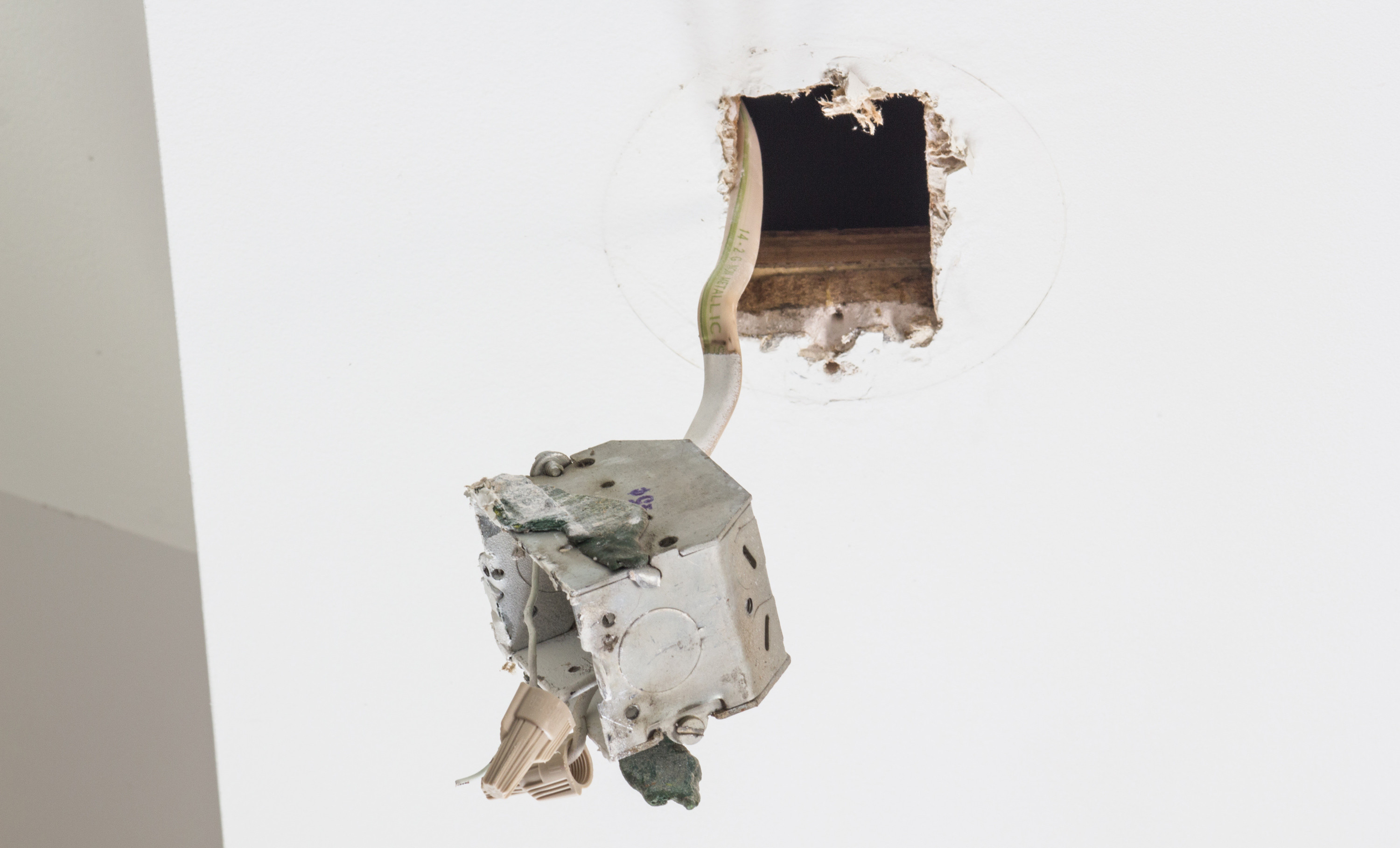 Can we get away with opening the bottom-most (flat, horizontal) drywall around the electrical box and reinforcing the area with more 2x4 framing, only having to re-drywall one surface? Do we have to rip off and rebuild the entire soffit to do this properly?

That's actually what I would suggest, but be aware of the problems in opening it up. Assuming the drywall was done correctly, there's going to be corner bead. Hopefully they didn't nail it together, or you might have to replace a lot more beading that you're planning to.

You might not need more framing, though, It's probably a full box already. Just take the old box out and put a solid fan box with brace in.

Not the answer you're looking for? Browse other questions tagged electrical drywall framing mounting structural or ask your own question.

1
Ceiling Fan with Recessed Lights
1
Should a board connecting a beam in the attic to a rafter be removed?
1
What is the cleanest way to trim the drywall around this electrical box?
1
How can I safely reinforce my garage trusses to support ceiling drywall and insulation?
0
2x4 trusses and 5/8 drywall ceiling
9
Are these integrated diagonal wall braces structurally important?
2
Will I need to change out box to hang 16lb ceiling fan?
0
Joist size calculation for attic loft conversion
7
How to hang a ceiling fan in a metal gazebo
0
How to safely handle a (likely) asbestos popcorn ceiling encapsulation?