How to repair after drilling through an electrical cable 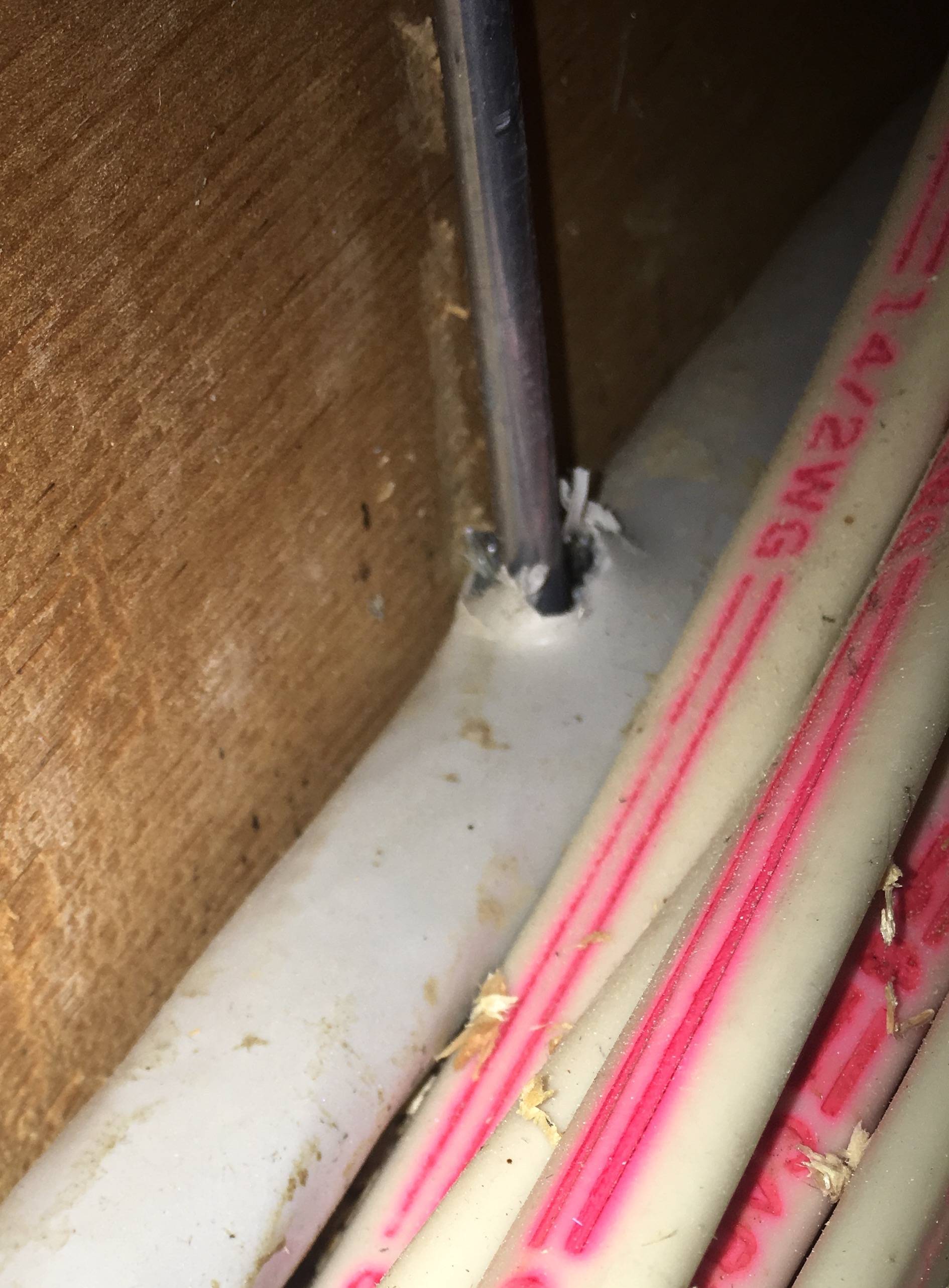 Drilled directly into this wire. Didn't trip a breaker, no sparks, didn't get zapped, didn't lose power anywhere. I know when we had previous work done on the house, there was a 220 wire that was dead in the walls/ceiling. Contractor traced it back to the box and it was disconnected there too. Did I happen to get extremely lucky and hit the one wire in there that wasn't live? Now what do I do? Also, out of curiousity, had that wire been live how likely would the risk of severe injury been from a screw up like this?

Looking at your picture, it looks like the cable is in an accessible area. Maybe the attic?

First I would verify that the cable is not being used as a circuit. Then I would have the electrician remove as much of it as possible so no one would ever try and use it as a circuit again. Also you are beginning to see the reason why we should be meticulous about labeling and removing any cable where the circuit was removed.

Once again looking at the picture, it looks like a large 40-70 amp circuit cable meaning it was probably feeding a major appliance or piece of equipment which you may not be using at this time. For example an electric range circuit and you are using gas, but the NEC still requires a range circuit is case someone wants to install an electric range at a later date. I never liked the idea of splicing such a large circuit because of the chance of failure at the splice. I would much rather prefer the entire cable be replaced.

In answer to the second part of the question. A breaker trip occurs in the event of a short, either to ground or to another phase. So cutting or nicking one wire will not trip a breaker (over current protection) but it does leave a dangerous situation. If your cable was in use and installed properly, and if the drill you were using was in good working order and properly protected (grounded and insulated) then the drill and the cable absorb the shock and trip the breaker, protecting the user. That's not to say it will protect you from a burn or secondary shock hazard. In other words I wouldn't bet my life on it.

Now what do I do?

I would suggest shutting off power to the building, double checking that the damaged cable is not live then tracing it to see where it goes.

It probably means cutting out the damaged portion and splicing in a section of new cable using joins that are approved by your local code for use in inaccessible places (that is, not in a junction box with a cover plate on a wall surface).

If your local code doesn't allow this you'd probably have to remove all the damaged cable between accessible junction boxes.

15
Can cable splice devices be concealed?

12
Is there any legitimate reason you would NOT connect the ground wire on a circuit?
28
Electric shock - was I stupid, unlucky, or a combination of both?
1
Contractor cut wire in wall - all still works fine - is this dangerous?
6
How to locate a disconnect in electrical wiring?
2
Could a circuit breaker ever be faulty in a way that prevents it from tripping?
2
Knob and Tube Wiring with AFCI
2
circuit box problem
2
any possibility that I may have damaged a wire in the wall?