Bathroom GFCI outlet tripped after turning on my razor!

Yesterday, I opened up my old "Racine" brand razor and cleaned out the whiskers that were in it. Afterwards, I turned it on and I noticed it was quieter. But a minute later I noticed that the familiar "buzz" came back, so I applied some machine oil on the blades. Then I turned it on and my bathroom GFCI tripped.

2...Had it not been plugged into a GFCI outlet, would I have been electrocuted instead?

3...Did my opening it up to clean it out have anything to do with it?

I did not spill any water on it. And I don't think my applying oil on the blades had anything to do with it, as I have done that many times before. But this was the first time I have ever opened it up to clean it out. I also noticed something was rattling loose inside it shortly before the GFCI was tripped.

In any case, it looks like it's time for me to buy a new razor! And when I throw out the old razor, I'll be sure to cut the cord off first, lest some dumpster diver (like me) pick it out of the dumpster. 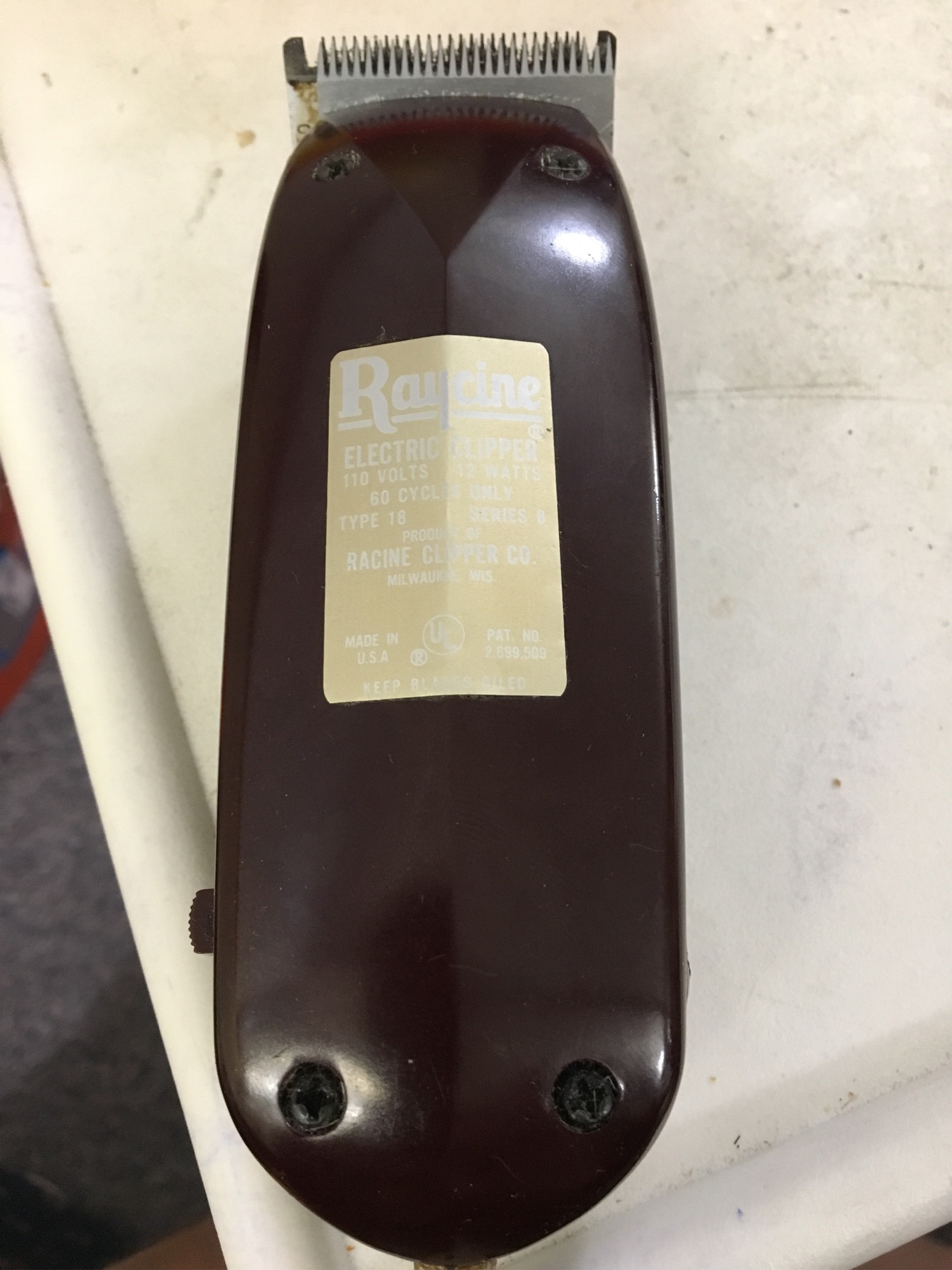 Yes, since your razor has two prongs, it cannot develop a ground fault by itself... a ground fault requires a third path. Indeed, the path was through you, and indeed, it probably would have killed you. And this is why we have GFCIs in bathrooms.

Tearing it down was probably the triggering event. My guess is also that the unit is repairable, but will need some careful and/or expert attention. It sounds like you did find a problem, but shrugged it off because you want to shave. You will not find another unit of this quality except maybe the $100+ Euro jobs.

Judging from the age of that razor it had two prongs so could not have actually had a ground fault.

Your biggest clue is that it seemed to be running more slowly than you thought it should.

I would wager that it could simply be that the old lubricant had hardened and slowed it down due to age. After a while it sped up. Then you shut it off and tried again, but by then the lubricant was hardening again.

I have a fan like that. Once it starts running (5-10 minutes after turning it on) I know not to turn it off or it may take a long time to get back up to speed again.

Being slowed down like that can increase the current draw, thus reducing the circuit voltage to the point that a GFCI won't function correctly. (They don't work unless they have enough power)

So in order to make sure your GFCI is working correctly I'd suggest plugging in a lamp or a circuit tester. As long as that all looks good then you can blame the razor.

If there is a different problem, like something electrically wrong upstream, it might be reducing the voltage to the GFCI. That could very well be a safety issue, and should be investigated.

My apologies to “SDsolar” for switching my “green arrow“ vote from his answer to “Harper’s“ answer instead. Here is my rationale, with a consolation prize for SDsolar.

Re:question #1... Both of you answered that question to my satisfaction, declaring that my old razor did not get a ground fault because it only had a two-pronged plug.

Re:Question #2... Only Harper mentioned that I probably would have been killed had it not been plugged into a GFCI.

Re: question #3… Only Harper mentioned that my tearing down the razor probably triggered the GFCI event.

But here is the consolation prize for SDsolar. Since my original post with these three questions, I have since had a SECOND razor trip that same GFCI! SDsolar suggested I test the GFCI by plugging in a lamp. I replaced my bathroom GFCI just recently, as my old one kept on tripping without provocation. (In fact, recently I replaced all of my outlets, including having all of my outlet circuits GFCI protected)And I have not had any problems with my electric toothbrush plugged into my new bathroom GFCI outlet.

But more importantly, only SDsolar suggested that the lubrication oil hardening may have caused the GFCI to trip. For that reason, if it were possible I would have declared it a TIE. But it ain’t. Long story short, I believe that is what caused the second razor to trip the GFCI, especially since the instructions say to use their special lubrication oil, instead of the generic machine oil that I used.

But to be honest, the second razor was one that I found in the dumpster. Though it worked fine until the day it tripped the new GFCI. I still have both razors with a note around them saying not to use them because they tripped the GFCI outlet.

Conclusion: it’s time for me to buy a new razor. Until then, I’ll just have to lather up and use a Gilette!

Thank you SDsolar and Harper for your answers, and also for those others of you who contributed comments.

Not the answer you're looking for? Browse other questions tagged electrical bathroom gfci appliances or ask your own question.

2
What could have caused my GFCI to trip, and what can I do about it?
0
Regular Outlet Tripped, Now Various Outlets Are Dead
5
GFCI lights have gone crazy
1
Circuit worked briefly after replacing GFCI, but stoppped
2
How to replace a razor only outlet with a gfci
0
Upgrading to GFCI, and the outlet box isn’t screwed into anything
0
Can static electricity trip GFCI?
0
Outlet not working