How to remove the handle on my Delta faucet?

One of my faucets is leaking in my bathroom sink. I have a double-handle faucet set from Delta. I removed the set screw from the cover but, for some reason, the cover still isn't coming off. I tried using a putty knife and screwdriver to pry the cover off but it's stuck. I also used WD40 to try to loosen it but that didn't help either. How much force is required to remove the cover if I keep pulling up on it? Is there some other screw that's holding it that I don't know about? Am I missing one of the steps necessary in removing the cover?

UPDATE: I squirted WD40, CLR, and vinegar into both the handle hole and set screw hole but it didn't help. I expected the liquid to flow down between the cover and the stem/cartridge but it seems like the liquid has no place to go so it comes out the same hole it went in.

I tried using a hair dryer to heat the cover so that it will expand but that also didn't work.

I've also tried hitting up on the cover with a rubber mallet to knock it up off the stem/cartridge. No luck there.

Lastly, I tried to wrap a rag around the handle and used pliers to try to pull up on it but that also didn't help. In fact, even with the rag and the teeth of the pliers covered with electrical tape, it still scratched up the cover.

Is there something else I can/should try? Is there a way to squirt things up from the bottom of the cover to dissolve the dirt/minerals that's holding the handle tight to the stem? 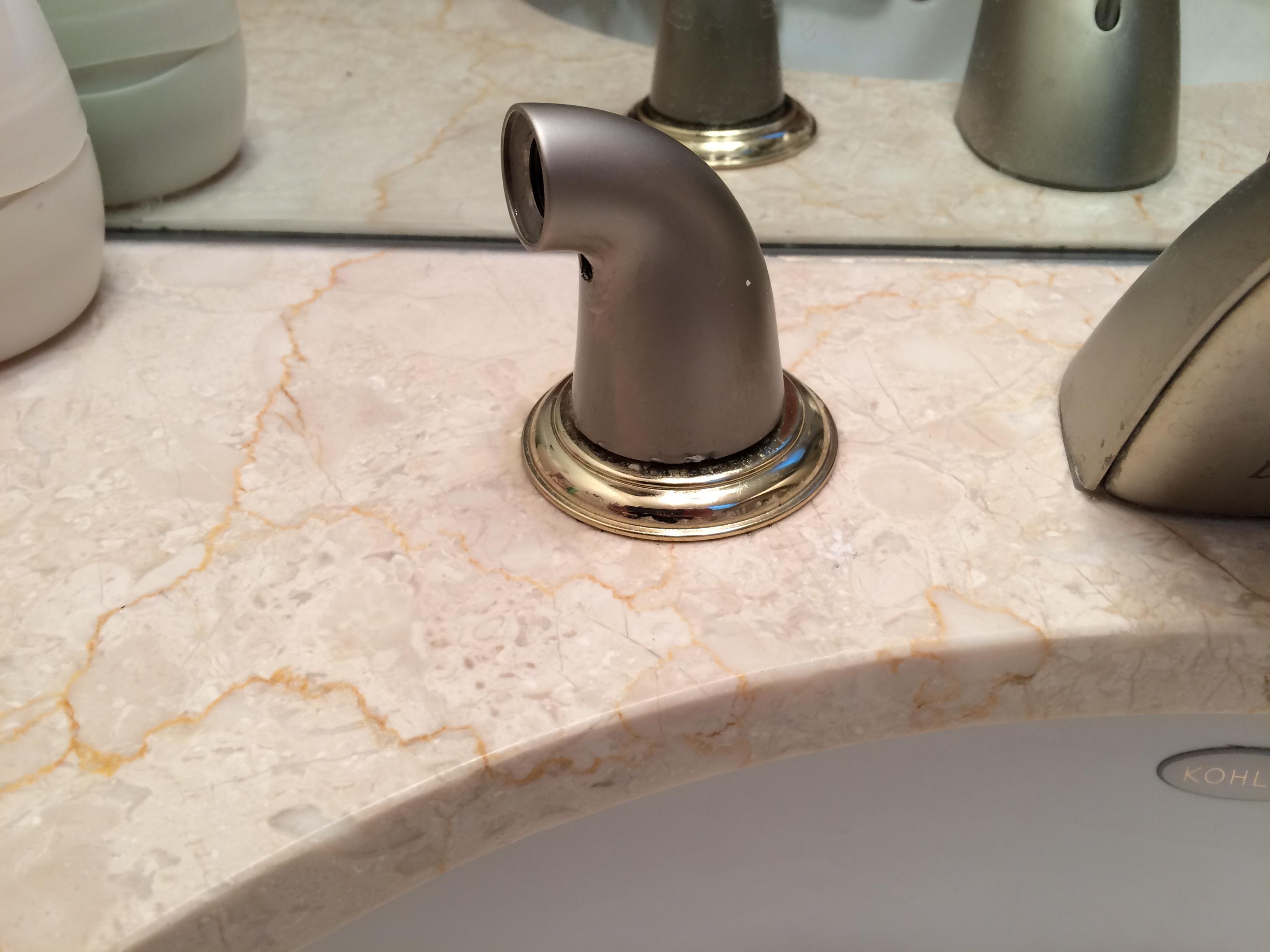 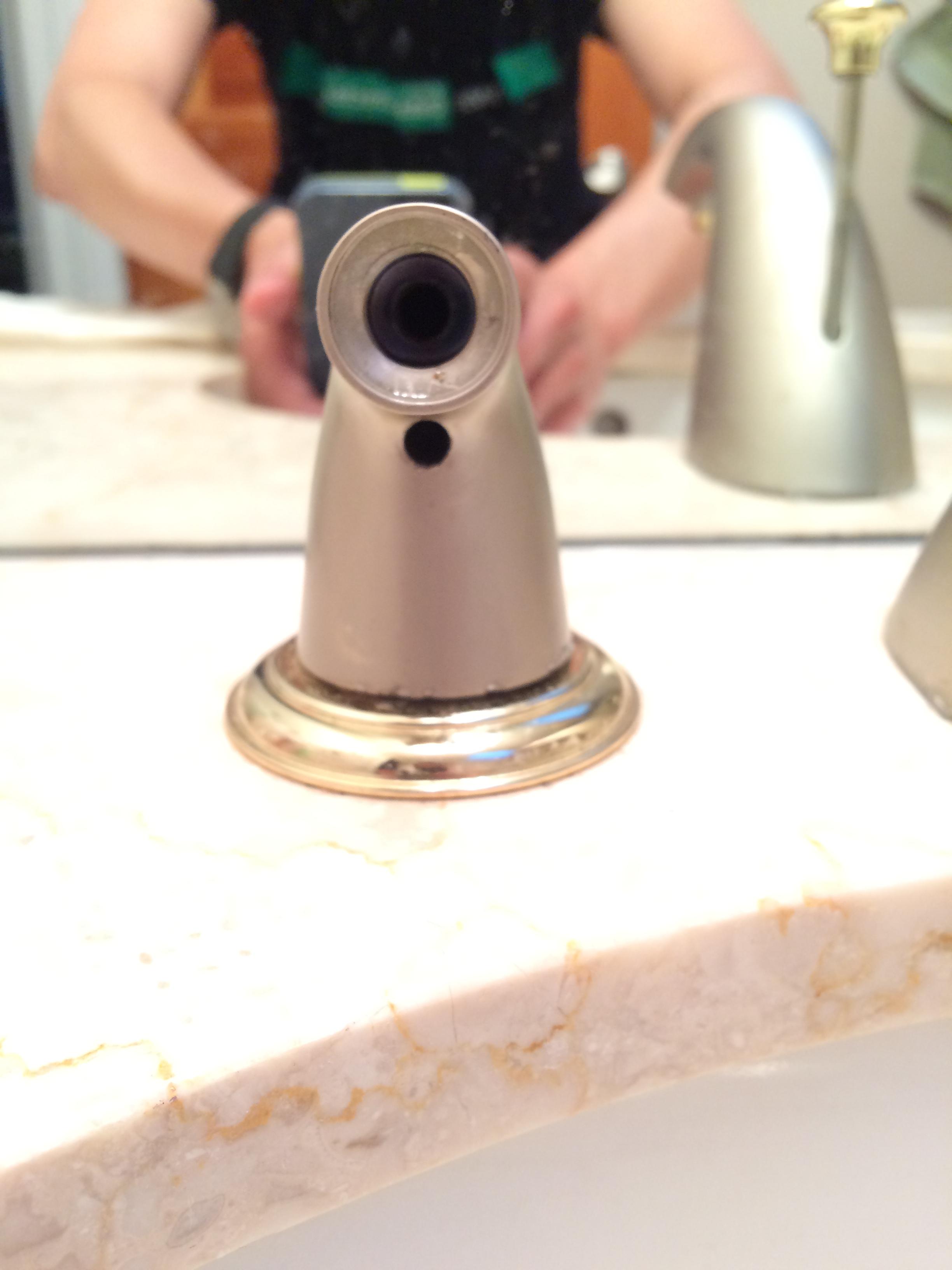 It looks like you have one of Delta's older 3530 models. Looking at the exploded diagram for this model shows part # H24 (the handle covers) with only a set screw holding it in place. If you've already removed that and the cover still won't lift off, it may be bound up on the stem from having been turned too far in one direction or the other (if it was leaking, I could imagine someone may have tried extra-hard to turn it off). I would try slowly but forcefully turning the faucet handle past its resistance point, with it in the on position first, then if that doesn't loosen it, try doing the same but the other direction with it in the off position. You may have to alternate this a few times to get it to free itself from the teeth on the stem.

If none of that works, there is a retaining nut on the underside of the sink counter (part # RP9519 in the diagram). It's not a very thick nut, so you'll have to put your hand right against the underside of the counter top to feel it. The threaded part of the stem assembly likely extends well past the nut, you'll need to make many turns to get it off. Taking the handle out from the counter will let you examine it in more detail and you can take tools to the less attractive parts to gain torque, hopefully avoiding any more scratches on the handle itself. Just be careful not to grip too tightly on the screw threads or you won't be able to reattach it to the counter!

It should just pull off. If it doesn't, you might try gently wiggling it side to side as you pull up. If you have a rubber or plastic mallet, you could try giving it a gentle tap to free it up. The trick is to be gentle enough to not break anything, but firm enough to knock it loose.

If you are sure it should slide straight up and you have removed the set screw, I would try a moulding bar or another type of thin pry bar inserted at the margin where the faucet and the trim ring come together.

You will also need a small block of wood to use as a fulcrum to raise the pry bar high enough to be at the level of the aforementioned margin and to protect the counter top. Start by prying gently all the way around faucet a little at a time and increase pressure until you get movement.

Only you can decide how badly you want to save the faucet and use as much force as you desire to remove it. Unfortunately, this method is likely to cause some damage to the lower edge of the faucet depending on how much pressure is required.

If prying fails and you want to replace the faucet anyway, I would take a hacksaw to the margin and cut the top of the faucet right off and continue its removal. I won't ever buy another Delta faucet as I have had problems like this with them in the past.

It will pry off, you just need the right leverage. Using one pry bar will not do it, it will take two, one from either side, using the dress ring as the fulcrum at first. The pry bar I refer to is the larger one of the three. The key is keeping the fulcrum as close to the handle as possible. If it does not give enough room to lift the handle before the end bottoms out on the counter top, raise the fulcrum using a small gauge nail or even a sort piece of wire. Important to use the right size to keep it on the dress ring (escutcheon)

There is a beveled side of the pry bar, keep that side down, flat side up. This will help keep the pry bar under the handle edge. place a little tape on the escutcheon to keep from marring it with the bars.

There are replacement handles available. Delta warranted my faucet for life and gave me a replacement cartridge for free. No charges at all. If you give a call and tell them your plight, they may replace you handle too. Of course they will need the model number or style.

I had the same issue. We ended up using a drill bit a little larger than the allen screw that was stripped and drilled through the screw. It came off easily.

Not the answer you're looking for? Browse other questions tagged bathroom faucet bathroom-fixtures or ask your own question.