French drain did not solve the problem

We noticed issues with our water coming through our basement cinder block wall and hoped a new interior french drain would fix them. It did not.

Short Version: We just installed a new french drain and we still have wet spots on the wall as high as six courses up. Why?

Long Version: The picture shows our basement. The black is the cinder block wall. The part highlighted in red is the unfinished part. The part in blue is finished. The front of the house is at the top. 'S' is the location of the sump pit.

The previous owner painted the walls and the paint was flaking off because of efflorescence. The efflorescence was worst in the corner (C) and along the front wall. In the corner the efflorescence went almost to the top of the wall, but it got lower farther from the corner. There were wet spots at C where the paint had been brushed away. The very bottom of the wall at W would sometimes get wet and there would be a small amount of water on the floor. I made a small hole in the finished part of the basement (at H). The drywall, sill, stud, and insulation were clean, dry, and free of mold, but the block behind them had a strong smell of mildew.

We talked to a couple of waterproofing companies and they all agreed that a new interior french drain would fix the problem, so we got one installed. A three foot section of the old drain along the left wall was totally clogged with sand but the rest was clear. They said the existing pipe going into the finished area was clean, so they connected it to the new white S&D pipe with holes in it. There were already holes in the bottom row of block, so they did not drill any new ones.

It rained really hard today and the spots at C are wet and there is water on the bottom block at W. The new pipe coming into the pit is totally dry. The wet spots at C are as high as six courses up and the pipe is dry, so I can't image there is water in the wall. Where is the water coming from in the corner? What should I do with the finished area? I really don't want to put a new drain in that area if it is not going to fix the problem. 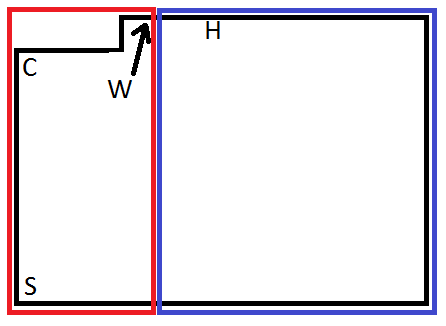 basement waterproofing french-drain
Share
Improve this question
asked May 26 '17 at 2:35

Putting a drain sump on the inside is like catching the blood from a cut on your arm into a cup. What you really need to be doing is taking a hard look at what caused the cut and remedy that problem instead. Just pasting on bandaids will not do the trick.

So getting back to the house situation. Look hard at what it takes to get water away from the outside of the basement wall. This can include any and all of:

Not the answer you're looking for? Browse other questions tagged basement waterproofing french-drain or ask your own question.

2
How can I fix a small slightly damp area in my basement wall?
1
Where do I need to drain the footing drain when I waterproof a basement from outside
3
Could this pipe be part of a french drain or something else related to a sump?
0
Is it okay to insulate a basement wall when an interior french drain is installed?
1
Will a French Drain on the outside of a house keep water out of a crawlspace?
0
Basement Flooding suddenly. It looks like I have a French drain. Why is it still flooding?
2
installing a french drain around a basement wall
0
self leveling layer with internal French drain
0
How far out to install french drain so water can't pass underneath it and still get into house?