My office overhead lighting currently uses fluorescent bulbs. For ~5 minutes after turning them on, lights will flicker. I diagnose this as a weak ballast.

If I insert LED retrofit bulbs into this setup am I likely to solve the temporary flickering problem?

led bulb fluorescent
Share
Improve this question
asked May 25 '17 at 13:13

Your ballasts are shot. It's time to upgrade one way or the other.

I am all about light quality (CRI and flicker). I tinkered with LEDs but finally went with T8 real fluorescents because the quality is better. Absolutely wonderful, it's like night and day (I left the storeroom in the old tubes, the room looks horrid.)

This is the best light money can buy, and the price is very reasonable.

You will want to change from traditional T12 tubes to the new T8 size. They fit in the same sockets but you must change the ballast to a T8 type. You want to anyway; your old ballasts are the problem! 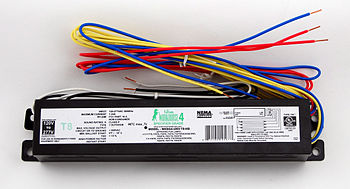 First, your ballasts. That is a module which limits current to the tubes. The old ones were very simple and stupid. They tend to "soft fail" with annoying flicker and poor light, and burning out tubes too fast. New electronic ballasts drive the tubes perfectly for excellent light with no flicker, even in cold. Almost any modern ballast will do fine; you can get dimming ballasts if you really want that. You will need to open up the fixtures and change the ballasts. However you'll be glad you did.

There's a glut of new T8 ballasts on eBay and Craigslist dirt cheap, because people are buying new fixtures and promptly switching them to LED. Or they're $13-20 retail. 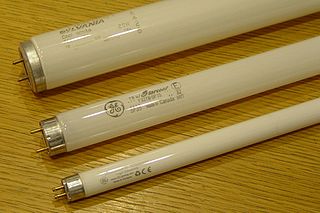 I just bought a ton of Sylvania Ultra Vivid 90CRI for $2 each. My shop looks fantastic. You can get as high as 98CRI in the $7-12 a tube range, but you don't need to. Just to compare, I left my storeroom in the mid-1990s T8 tubes and wow, what a difference!

Everyone's flocking to this technology because it has hit the "price point" - I see even Sylvanias as low as $6/tube. However the cheapies sacrifice CRI to hit the price point -- and you really want CRI because that's what you have to look at all day. Like I say, my shop makes me want to work in it.

I haven't found any reputable makers of 90 CRI LED tubes. Many won't even state the CRI, which means you better run! Sorry but as a purist, with 90 CRI in my shop at affordable prices, I think LED fluorescent replacement tubes don't compete. (Other LED products are great!) Now here are some things to watch out for. 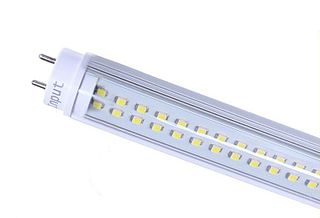 Power on one end. Those little chips can be harsh. 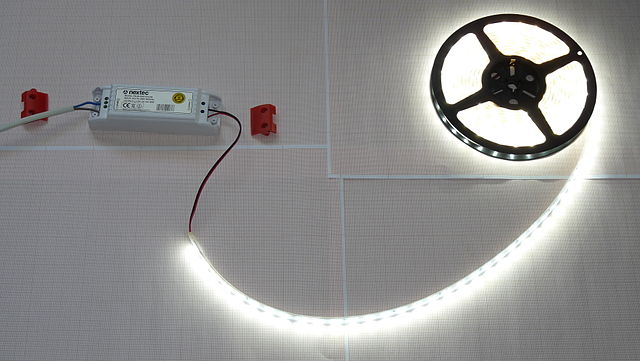 I have also converted a troffer to LED by removing all the tubes and adhering LED strips cut to appropriate length. A 5-metre roll of 3528 LED strip gives about the same useful light as two T8 tubes. I used a top tier 12V LED power supply of the same dimensions as a ballast, so it clipped right in. We leave it on 24x7 as a security light, and it's run perfectly for 5 years despite being a $7 cheap Chinese LED strip. CRI is terrible of course.

I mention this method because it opens up a wide variety of options, including RGB strips, warm/cool blending, infinite dimming, integral 12V emergency lighting, etc. If you simply wanted 80CRI 4100k light, this method won't save you any money. The reason to do it would be the versatility. You could have the coolest office on the block.

The LED strip approach can also co-exist with actual fluorescent lights in the same troffer. Leave all the tubes in place and stick the strips between.

LEDs are not susceptible to the sorts of startup flickering that affect fluorescent tubes.

Your best chance of eliminating flicker is to remove the ballasts, then fit a good quality LED fixture - ideally one that tolerates most dimmers.

Not the answer you're looking for? Browse other questions tagged led bulb fluorescent or ask your own question.

1
Track Lighting LED bulbs flickering
5
Trouble with LED bulbs
0
laundry room fluorescent lights dim and flickering
1
Fluorescent Lights Turning on Slowly
3
Several LEDs and LED bulbs in my house are failing at the same time and way before their estimated lifespan
2
Why do these LED light bulbs flicker when my remote control has turned them off?
1
Fluorescent lights sometimes don't turn on
0
One Flickering LED Bulb On Switch with 4 Bulbs