How can I detect reverse polarity on an ungrounded receptacle?

Recently moved into a 1950s-built house and am swapping out some of the older receptacles.

In installing the new receptacles I switched the wiring so that the black wires are connected to the gold screws and the white wires to the silver screws.

It is difficult to test without a ground reference. One way to do this is with a very sensitive (very high impedance) voltmeter such as a digital voltmeter. Make absolutely sure you are not grounded (and no pets or children are around). Make sure the digital voltmeter is definitely on the voltage setting. Plug one probe into one hole of the outlet, while the other probe is stretched out some distance. There should be a "phantom voltage" reading of somewhere between a few volts to nearly the full line voltage (for you in North America that would be around 120 volts) when plugged into the hot side. On the cold (neutral) side, there can also be some phantom voltage but it should be much less.

There is a potential harm in having the polarity reversed. Lamps with screw in bulb sockets should always be polarized so the rim of the socket (which is more easily touched) is connected to the cold side. That way to be shocked you'd have to stick your finger all the way inside the socket (you would not do that). With the polarity reversed, the hazard exists at the rim, which may have some exposure even with the bulb all the way in.

The hazard can also exist with older appliances that have the cold side intentionally connected to the appliance metallic frame. That was the only way to make them safer before the grounded outlets became widespread. But it required the outlet polarity be correct.

You can mitigate the hazard by using a ground fault current interrupting (GFCI) receptacle even without a ground wire available. These devices do their intended function even without a ground wire attached. The test button also should work (it cheats by running its 5ma current test between hot on the load side and neutral on the supply side ... not ground). If you find a device where the test function fails to trip it, do not use it. Mark the device as "UNgrounded" for circuits with no ground available. Do not use an alternate ground source that is not part of the supply cable for this purpose. Never use the neutral as a ground.

The most common hazard to people is being grounded when coming into contact with one wire that happens to be hot. The GFCI will trip in this situation even though the current is as low as 2ma. If a metal appliance has internally faulted where a hot wire has nicked or damaged insulation and is contacting the frame, this hazard exists with the frame of the appliance. In grounded situations the ground wire would cause that to short circuit.

In addition to lamps that Skaperen mentions, any other switched device will often switch only the hot connection. So if you have the polarity reversed, the internals of the device may always be hot (e.g. metal tongs in the toaster). The easier way to test is to get a ground. Try a wire connected to your copper plumbing pipes, or even better, a long extension cord connected to a grounded outlet somewhere else. Then a cheap contact based voltage tester between the ground and the hot wire can be measured.

As always, if you're not sure what you're doing, have the electrician do it. And turn off the power when handling electrical wire (only turning it back on temporarily for your test).

If the non-contact voltage sensor is not an option, build yourself one of these: 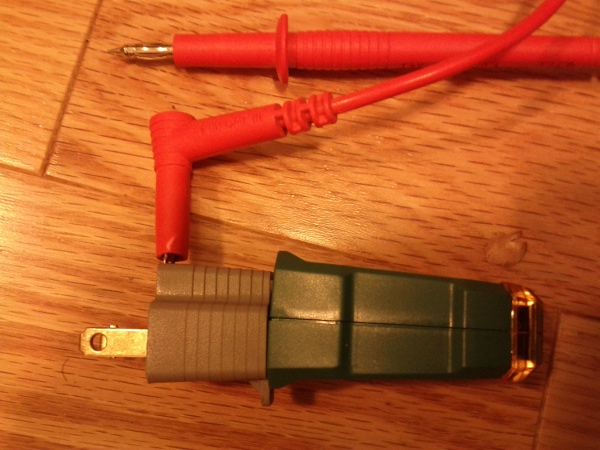 I used an old neon AC tester and a proximity detector. Put both of the probes on the neon AC tester onto the the same slot in the outlet, then hold the proximity tester near the bulb - or the part of the tester farthest from the outlet. Do the same for the other slot.
The continuity tester will light for the hot slot- and not so for the neutral.

The methods above can kill you. Instead, just buy a Electrical Receptacle Wall Plug AC Outlet Ground Tester from Amazon for $5.

17
Is there ever a reason for reversing hot and neutral on a receptacle?
1
Video / audio ground on ungrounded equipment
0
Is it possible for the black wire to be hot but to create reverse polarity in a GFCI?
2
GFCI outlet/switch combo installation?
2
Wall of 2 switched outlets not working
1
Wiring Options for 14/3 NM-B Cable and Two Single Pole 15 Amp Circuit Breakers
2
Replacing outlet; found one white wire hot. How to connect?
1
Why is part of my GFCI circuit dead after a short-circuit?
1
How should I connect a new outlet with two pairs of wires?
4
Hot wire stripped in the middle, wrapped around a screw. How can I replace with GFCI receptacle?