Is a 200 amp panel adequate for my needs?

I'm looking for feedback on my plan before I begin the panel replacement, so thanks for your input. I already have a permit and am allowed to do all the work myself as long as it passes 2014 NEC code upon inspection.

My primary goal is to remove the 60 yr old aluminum wire and replace with copper and upgrade the panel box replacing all breakers as every current breaker is some weird double breaker that has two flip switches and two circuits in every slot on the box. Not enough room in current box if removing all doubles for singles.

I'm done running new wire throughout the house and ready to shove the new home run wires to the new box, this is where i have uncertainty as I'm trying to future proof. I anticipate a second HVAC for the second floor (i live in the south and this is the standard now for getting the upstairs below 85 in summer). Thus, future box would have about 15 20AMP breakers, 4 50 AMP breakers (HVAC) 3 30 AMP (tankless water heater) one stove at 40 AMP and dryer at 30 AMP. (presently have 1 30 for tank water heater and a 70/50 for hvac, which is oversight from hvac replacement done last summer and should be 50/50). I have a 200 AMP service presently, if i require more the local company will run a second 200AMP line to the house.

Based on feedback, further research and opening up my panel box. I'm thinking I'll consider not replacing the panel as i have a 200 30/42 box, but several of these tandem breakers are not in proper slots so I can fix that while ripping out all the AL wire and putting in new breakers and CU- I may do away with most of them as they're unneeded if i do the subpanel. I still think a sub panel is a good idea given all the big stuff is centralized - even though that means a flipped breaker would be under the house...

New question, last time i was in the box replacing a breaker that was shooting sparks into the house i thought my main lines were copper, they clearly are not. an electrician friend thinks they look fine, but should i consider a CU replacement all the way to the meter? 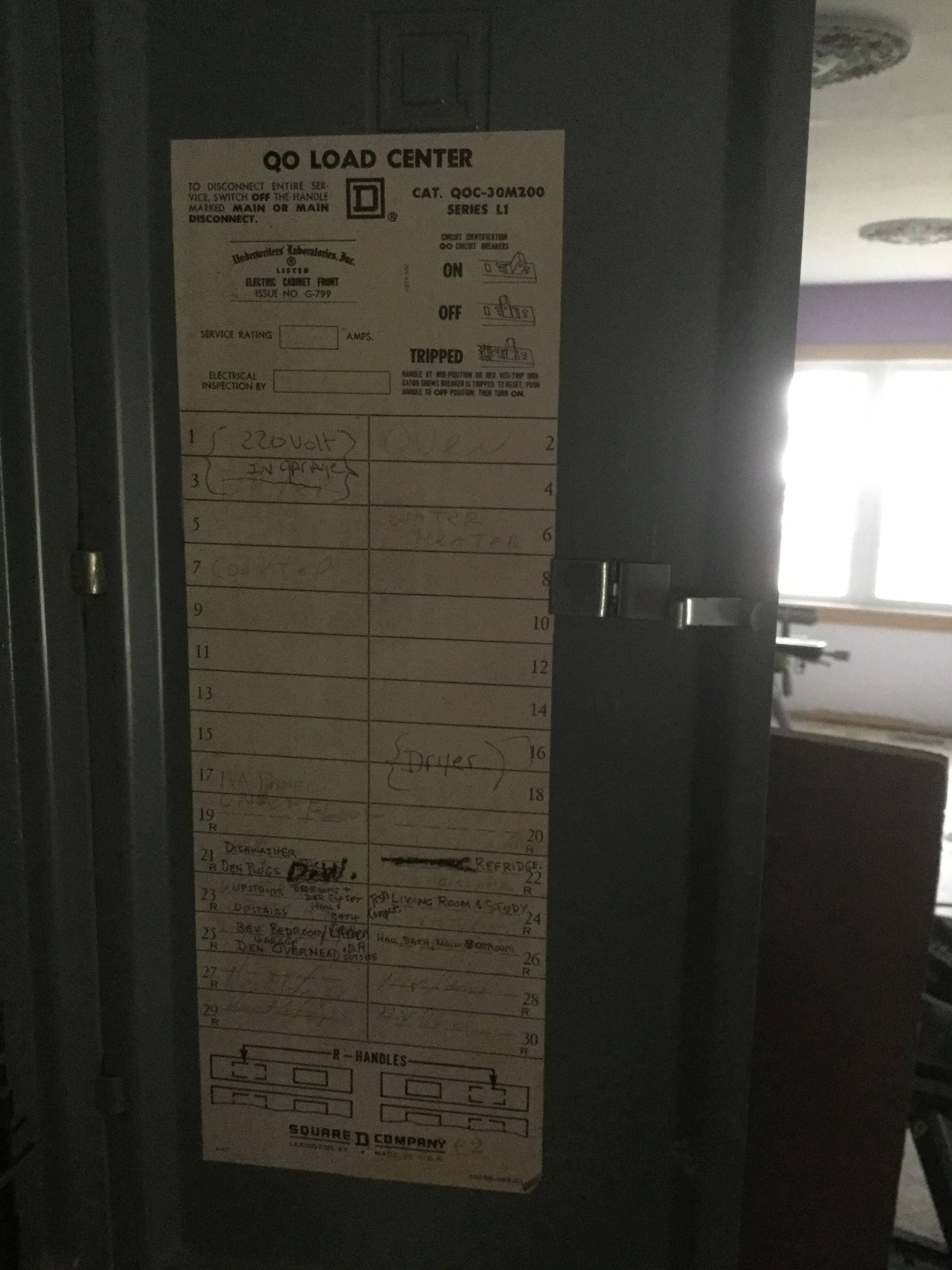 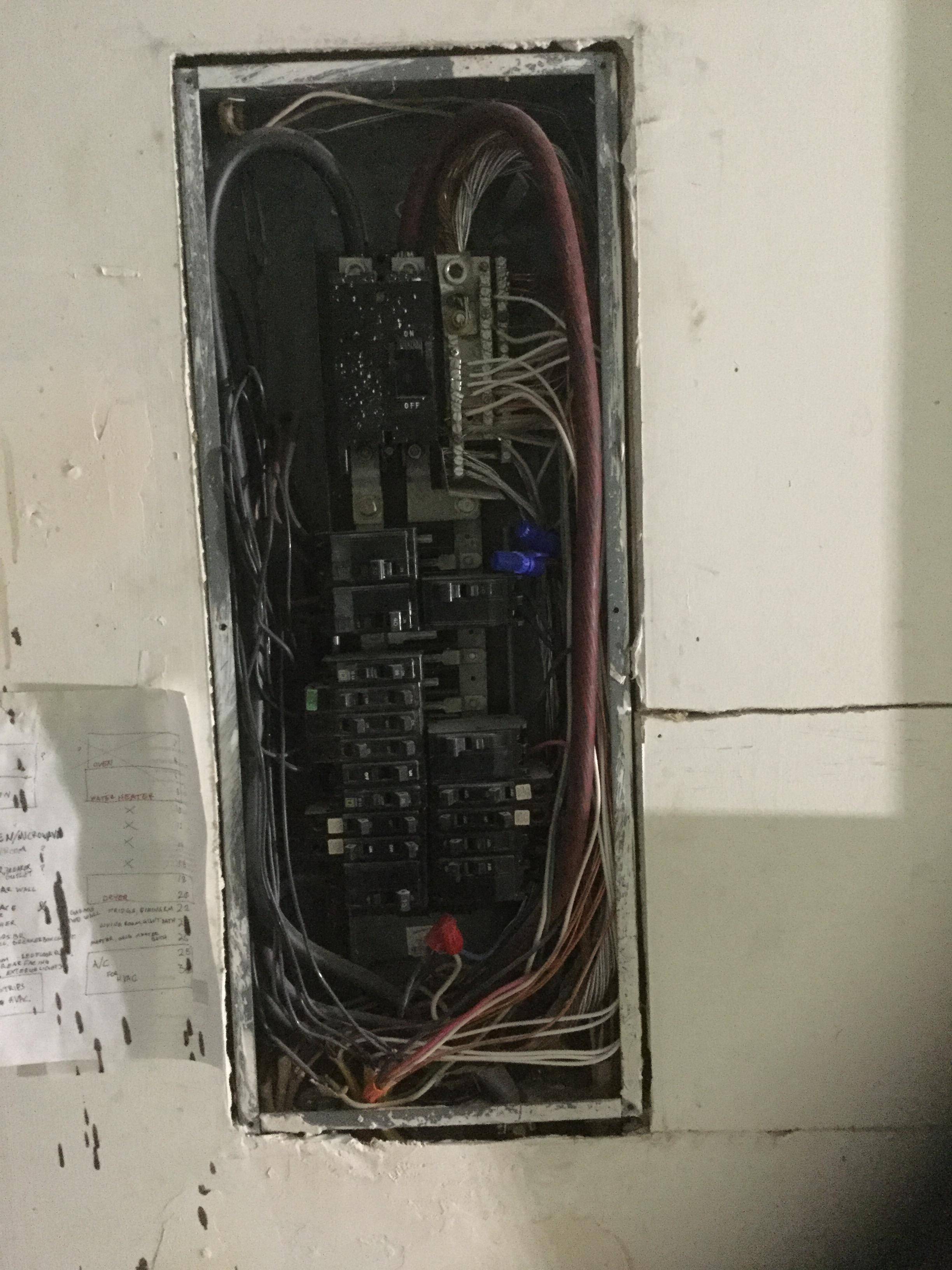 on the left is my trial/error breaker description, on the right is a hole patch from previous owner, not sure what the reason was

In the 1960s, owing to a copper shortage, they rushed to market aluminum wire made from transmission line alloys, for 15-30A branch circuits. Electricians used it with common receptacles and switches listed for Cu-only, and in the rush, nothing was properly tested. On top of that, the work was often badly performed because housing booms tend to draw from the bottom of the barrel skillwise. I hardly need to tell you how that went: the things you saw were indeed your house almost burning down, and they were due to arcing. There are two good fixes:

As a backgrounder, copper has been commercially viable since 9000 BC, aluminum since 1950 thanks to smelting processes which use electricity. Obviously Al arrived in an electrical system long built-out and with pre-existing stock of gear made for Cu-only. The AA-1350 alloy, developed for steel-core transmission lines not small-wire terminations, was also a problem. All done in a rush.

Regardless, it can be argued that Cu is the bad actor because it doesn't have a good elasticity range and likes to work-harden. Al wire on Cu lugs doesn't work, but Cu wire on Al lugs works fine - as seen on Alumiconns, CO/ALR receptacles, and the lugs on your panel. You need to get the torques right because of dissimilar metal expansion/contraction rates. The right torque lets the Al flex and spring back as Cu changes size.

The new AA-8000 alloys are safe for 15-30A branch circuit wiring, but I won't use it because the inspector hates it, the buyer hates it, there's no cost savings, and it's too oddball. Like a lot of people, I start looking at Al for 60A+ (#4-), the larger, the more likely.

As I look at your numbers, first, on-demand water heat, awesome. Even better if it's several units near point of use, because then you're not paying or waiting for hot water to cross the house. It's common for all-electric houses in the snowbelt to have 400A service.

I don't understand 4x50A for air conditioning. This seems like both too little and too much for a heat pump, the pump proper doesn't need 50 and the emergency heat usually needs more than 50. Critical issue is which will be used at the same time. If you need to run 4x50A at once, you're gonna need a second service.

I think a subpanel is a great idea and I would go 200 or 225A. Stay with QO if you like, great commercial-tier panel type. I would confer with the power company about where to locate this if it's to be the future main panel for a second service (keeping in mind one option is to put the main breaker outside as part of the meter pan, and feed this as a subpanel). Set it up so you can do both:

Spaces: You say nine 2-pole breakers (seems low, but alright, 18 spaces) plus you say 15 singles (but I count 18 singles in your panel already with the double-stuff's).

Using double-stuff breakers is bad news, especially on a panel with 3/4" wide breakers. Most circuits are or will require AFCI or GFCI (and you want AFCI on any AL branch circuits). Those don't come in double-stuff, not even on 1" breakers.

As far as the existing fat 200A aluminum wires, The lugs are aluminum. I would call the power company, have them pull the meter, inspect them at all ends for deterioration, clean 'em up, use the No-Ox.

Change the meter-panel run to Cu if it's really going to bother you. Copper on an aluminum lug will work if you get the torques right.

What am I overlooking? See the two large wires landed on the neutral lug and dissimilar metals to boot? That is illegal, a recipe for disaster, and a lost neutral can do far more damage than a lost hot. If the stranded Cu cable is your wire to your grounding electrode, that should go to your ground bus. If you absolutely need both wires to land there, then get the correct lug for this, which has voids for 2 wires. 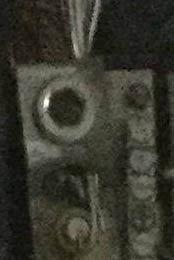 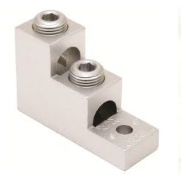 It sounds like you prefer running 6 AWG wire. Paralleling is absolutely not allowed, you cannot run two #6's for 100A instead of one #1Al or #3Cu. If you want to keep your heavy-wire runs to a minimum, don't be bashful about putting the subpanel right next to the main panel. That is completely kosher.

For a short run, I'd be inclined to use copper (damn the dissimilar metals) because it will flex easier and be less likely to unclip the breaker.

Believe it or not, Single occupancy dwelling units have more code calculations and rules than almost any other building. Its because you consider diversity not connected load. In the State of Texas the largest meter box allowed is a 320A which the Utility Company calls a nominal 400A meter and will allow you to attach 2 - 200A panels or Breakers to your residence and the main means of disconnect must be placed at the same location. A parallel service will not be allowed.

When you do calculation for the service. Breaker sizes mean next to nothing. You need specific information about your equipment and appliances. Either nameplate or code equivalence. You need to get a professional to do this for you. No one will be wanting to do this for free. You might get a small independent Engineer to work it out or a master electrician. I suspect you are trying to get the electrical contractor to do it for free promising him he would get the job, but no electrical contractor I know, in this area, would do it without a signed contract for the job.

Sidebar: In general when I see someone talking about an electrical instantaneous water heater. I try to talk them out of it. The main reason is the cost of installation and the stress it puts on the electrical service. If you're convinced this is what you want, then go with it. If you're just thinking about it, try and find other people who have installed and used one and ask for their unbiased opinion. I would suggest other people you know, but you could also go online, just use good judgement.

Buy the way I have nothing against gas instantaneous water heaters.

Also, buy the way a plumber once told me they were to be called water heaters not hot water heaters because if the water is already hot why would we be heating it.

Relatively few houses have a main breaker large enough to service all the circuits at max load. So if you have 25 circuits each 20 am service you do NOT need a 500 amp main breaker.

Not the answer you're looking for? Browse other questions tagged electrical hvac electrical-panel or ask your own question.