Why did my garage door opener fail weeks after being fixed?

My home that I've lived in for three years was built in 1982. Up until recently, I had enjoyed trouble-free operation of the garage door opener that was installed in the house when I moved in.

Earlier this year, the garage door opener failed. I opened the device and thought that the cause of the failure was evident: there is a drive gear between the engine drive shaft and the chain sprocket that was completely worn out. The gear appears to be made of white plastic, the the inside of the device was coated with white plastic.

I looked up the garage door opener and found that it was a 1993 Lift Master; nearly a quarter of a century old! Fortunately, modern repair kits still have parts for it. The part number for the repair kit is 41c4220a.

I purchased the repair kit and replaced the worn gear, reassembled the device, tested it, saw it work, and patted myself on the back for a job well done. About five or six weeks later, the garage door opener failed again. I opened up the device and saw that the drive gear was worn down exactly the same as the previous one was when it was replaced.

That suggests that the gear itself is probably not faulty, but something else is somehow causing it to fail. The gear that it turns against looks fine to me, so I'm wondering what the problem is.

Below is a photo showing the worn gear and the new replacement part. 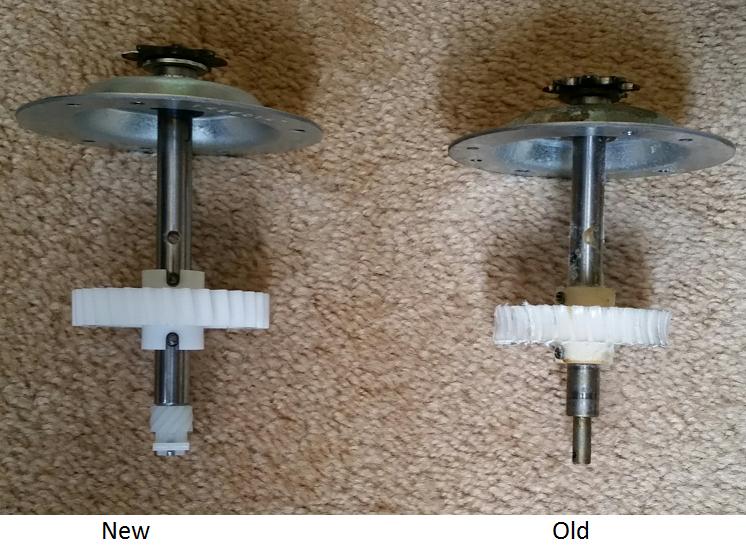 Browse other questions tagged garage garage-door-opener garage-door or ask your own question.