What is the ideal method of supporting a 27" deep floating desk across 10 feet of wall?

I'm building a floating U shaped desk in my office that will go from wall to wall. This desk will need to support the monitors and accessories of two desktop computers. The towers will be on shelves closer to the ground out of the way.

I would like it to be 27" deep along back wall, which is 10' 7.5", and 24" deep along the arms, which will extend 4' out. The finish surface will likely be cabinet grade pine plywood, 1/2", sanded and stained a nice color. I will fabricate the surface using two sheets of plywood, cutting a 69.75" x 48" outside dimension L from each sheet.

I've spent hours searching for something similar to this, but common sense would dictate that the deeper the shelf, the harder it is to use small and concealed support. Another concern is preventing the plywood from warping under load. So far the best advice I've received is to use flanges and threaded pipes on every other stud all along the underside. Either that or spend $30 a pop for a few granite counter top brackets. I would like to avoid that.

Using an in-wall bracket is not an option as I rent an apartment. I have no problem patching holes from bolts but I can't go cutting into the sheet rock willy nilly. I would like to know if anyone has experience with this sort of thing or has any ideas that would work.

This is an idea i'm considering, using 3 different shelves. I would do the arms as 4' x 2' shelves flush to the corners of the wall, and a single middle shelf at 27.5" x 27". But I'm still worried that 27" is too deep for support.

I built a floating desk with brackets like these.

It is critical to fasten the brackets in solid structure (studs). I used fasteners like these. 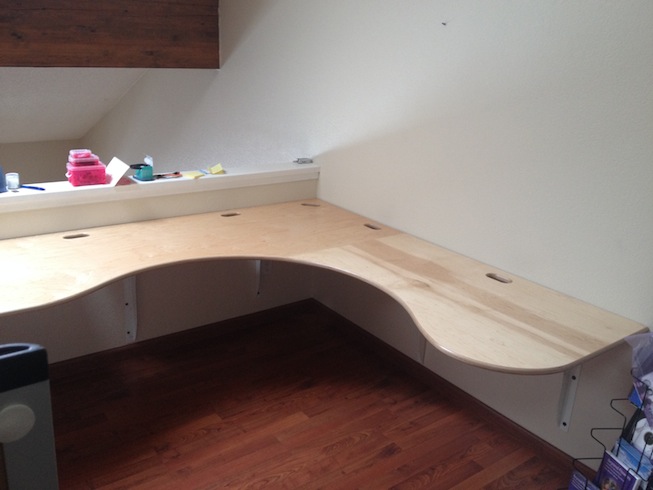 Put legs to the floor and keep your life simple. Why make a rocket science project out of something than can be a lot less bother.

Not the answer you're looking for? Browse other questions tagged shelving desk or ask your own question.

2
Will double-track shelving work for a computer desk?
4
Is there any harm in using shorter shelf brackets with a deeper shelf?
5
What are the proper materials and method to hang heavy-duty shelves in a garage for storage?
3
Can I attach floating shelves to the wall in this way?
2
How can I support a desk without legs or brackets
0
Best way to mount a floating L-shaped desk to a brick wall
1
Hollow-core door shelves bracketed with 3 pieces of 1x1?
1
Mounting a monitor arms clamp on an IKEA desk, what can I use to distribute the load?
1
Floating desk on concrete block wall