The wiring for a bathroom light and a receptacle are in a 3.5 x 1-1/2 in. octagon electrical box. Is this the correct size for this number of wires? There are 3 blacks, 3 whites, 1 red, and 3 grounds. It's a 15 amp circuit. I'm not sure whether the gauge is 14 or 12. The wires in the bushing on the side of the box are Romex. The other wire is 50 yrs old. The house is in the USA. I've read some fill charts on-line, but I don't understand them as there are various increases/decreases in the conductor count for certain situations. 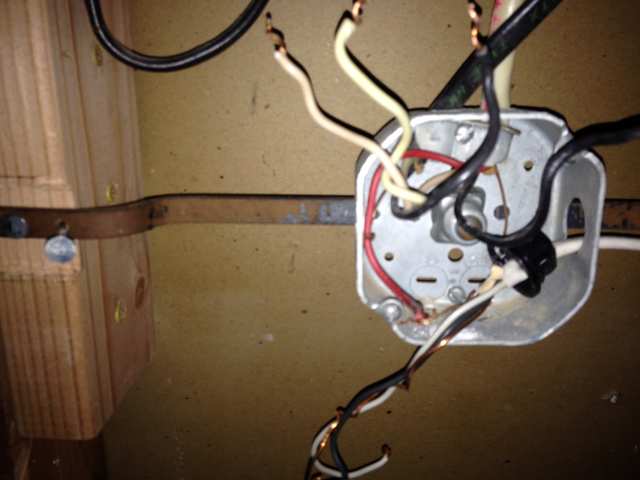 You have a few options.

That many conductors is fine - you have no issues with that. Your load ratings on that box are important. You are reworking it - so it will need to be in code.

The following paragraphs of text Were taken from here >

The 2008 revision of the NEC significantly changed 314.27. Significant changes often bring numerous errors. The 2011 revision corrects an error in the previous NEC by requiring that boxes installed in a wall for luminaire support must be marked on the interior of the box to indicate the weight ratings of the box. The 2011 revision also: breaks up the requirements into a list format, for easier reading; incorporates the provisions for lampholders into the title of the rule; and revises the luminaire box ratings for clarity and ease of reading. Ceiling Fan Boxes

Outlet boxes used as the sole support of a ceiling-suspended (paddle) fan must be listed and marked as suitable for this purpose. If the maximum weight isn’t marked on the box, it is allowed to support a fan up to 35 lb. If the box is marked with a weight, it can support a fan up to that weight, but not more than 70 lb. Ceiling paddle fans more than 70 lb must be supported independently of the outlet box [314.27(C)].

Occasionally, an electrician may install an extra unused switched conductor in a luminaire outlet box installed in the ceiling. While this may seem like a nice feature — because it allows for a future ceiling fan — it’s a Code violation when the ceiling fan is finally installed, unless the box is listed to support a ceiling fan. This change was accepted after initial reluctance, because the NEC isn’t in the habit of dealing with future violations, no matter how likely they might be.

The result of this change in 314.27(C) is that such an installation must incorporate a box that’s suitable for ceiling fan support, despite the fact that a ceiling fan is not installed. Considering the effort required to install the separate, independently switched conductor, this change does not add much of a burden to the electrical community. However, it does add an enforceable requirement for AHJs who did not have one before.

Not the answer you're looking for? Browse other questions tagged electrical wire junction-box or ask your own question.