What is this mysterious pipe in my backyard?

I'm replacing a fence in my backyard. Some of the new posts will not be in the old holes. While digging a new hole, I came upon a pipe which is in the way. I don't know what it is for and I'm unsure if it's safe to put a post next to it.
I can see some hairline cracks in it, which may have been caused by the temporary post I put in next to it. 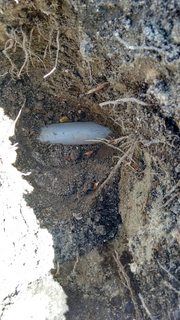 This is in the Netherlands. The pipe seems grey pvc, at a depth of about 40 cm. Its diameter seems about 40 mm. (which is a standard diameter).
It comes from under my (paved) backyard and disappears under the street. The picture above is right next to the gutter of the road behind my backyard, so it's at the edge of my property. There is no manhole or drain in the road where it could be leading to.

I'd like to know what this pipe could be, and if it's safe to put a post next to it, possibly putting some stress on the pipe, or what measures I should take to protect the pipe.

In the end, I just put the post right next to it. It's now covered with soil again and paved over.

This does look like large electrical conduit for a transformer that would supply multiple meters (say 4 to 12 dwelling units). Contact the electrical supply authority and describe the location and send a picture. The cracks may be repairable from the outside without interruption of service, but if water infiltrates then it might necessitate a more involved repair.

This is not a utilty line, it's an electrical conduit pipe. Previous homeowner ran an electrical line. Perhaps a sprinkler line. The line is going to exit the ground somewhere. Look around your property for the same-sized pipe.

This could also be what remains of an abandoned line.

Not the answer you're looking for? Browse other questions tagged pipe backyard or ask your own question.

1
How to fix a ventilation pipe to the wall?
5
How can I fit a pipe inside another pipe?
3
If pipe has been frozen for a week, should I call a plumber?
3
UK to East European shower pipe converter
15
What is this mysterious pipe in my back yard?
4
How Can I move an old galvanized pipe
0
Bury water pipes, gas line, and electrical pipe
29
What is this vertical metal pipe in my backyard? old well? septic?
7
Paver installation - excavation limitation
0
heavy duty workbench leg from metal pipe?