Over the past week I've ripped up the old decking and railings on our 12x15 deck, and installed new railings and all but the last two boards. Noticing that there was no ledger flashing, I pulled back the siding, and then noticed termite and rot damage behind the ledger board. I went to the basement, and cut through the drywall ceiling to inspect, and then verified that we have about a four foot section of rim joist affected. I saw no termites so presume this must be old damage. The four or so lag bolts through the ledger to this rim joist obviously weren't providing any support.

The house has 2x10 floor joists, 16" on center. At the top of the wall giong from inside the house to outside, there's 1/2" drywall, 2x4 top plate, 1" gap, 2x6 sill plate, 2x10 rim joist, small piece of aluminum siding with nailing flange, then 2x10 ledger board. The gap and sill plate are over concrete block, and the rim joist appears to be above the brick veneer. 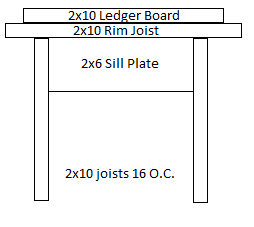 Convert to freestanding deck. This would entail adding two to four posts along with footers. There's a concrete pad under the deck so I believe I'd have to cut through that, I don't think I can bear on it. Quite a bit of work, couple hundred dollars in materials, and ugly and intrusive posts in the way.

Double up 2x10 blocking to go between each joist, such that one half is positively on the sill plate, and the other is in place of the old rim joist and directly against the ledger board. Use structural screws to fasten ledger board to blocking, and use steel angles to join blocking to joists and sill plate. 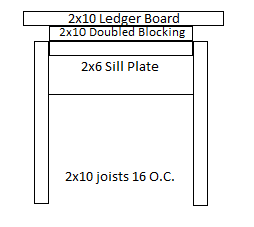 This would be the easiest option, a little expensive due to the angles and fasteners required, and has the most uncertainties, to the point I think I'd want an engineers opinion.

I like option 3, but would like to do some calculations to ensure I'm providing sufficient support. What resources would I need to reference to calculate the forces involved? I've found tables giving the allowable loads for fasteners and framing angles, but I understand there's somewhat of a cantilever effect with the ledger board being spaced 1.5" away from the vertical load bearing surface of the sill plate, and I'm not sure how to account for that fully.

Browse other questions tagged deck ledger or ask your own question.