How to remove an old KitchenAid dishwasher?

I am looking for any information that could help with removing a KitchenAid KDC-37 SST dishwasher. It appears to be part of an integrated sink-dishwasher-drainboard unit. The KitchenAid support site is not able to find any information or manuals for this appliance; it's probably too old (perhaps up to 40 years).

You can find a photo (not mine, but it looks almost identical) here. 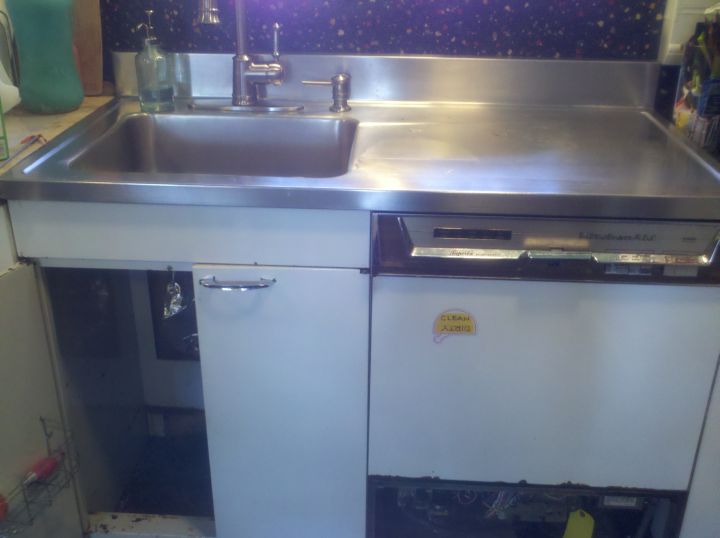 Ideally, I would like to be able to separate the old dishwasher from this unit cleanly so a new dishwasher can be installed in its place. If that's not possible, I would still be very grateful for any tips about how to remove the entire unit.

For the record--in case there are any more of these models out there!--here's how it worked out.

The KitchenAid people were very helpful, but all they had were installation instructions for a comparable model. From that I learned that the sink, sink cabinet, and dishwasher were originally installed as a "unit." 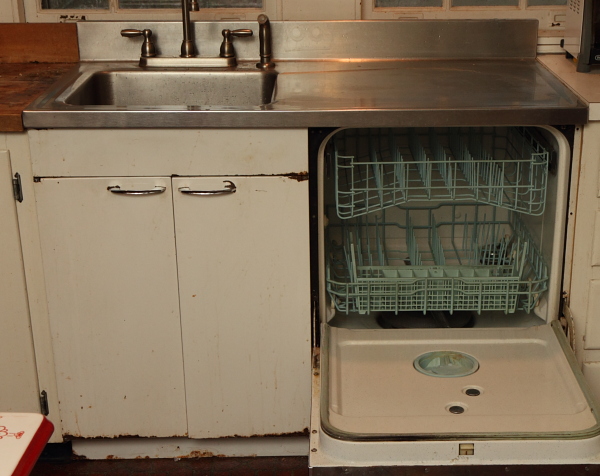 So, I gave up, figuring there were loads of attachment points that I just wouldn't be able to get to: the objective changed from replacing the dishwasher to rescuing the stainless steel sink and top.

It turns out, though, despite the claim on another Web site that "the dishwasher is secured to the cabinet with screws from the back, front, and through the side from underneath the sink,* that nothing could be further from the truth:

By the way, to bring this story to a happy close, here is a photo of the new sink cabinet (partially constructed) with the old counter and sink restored, ready for the new dishwasher: 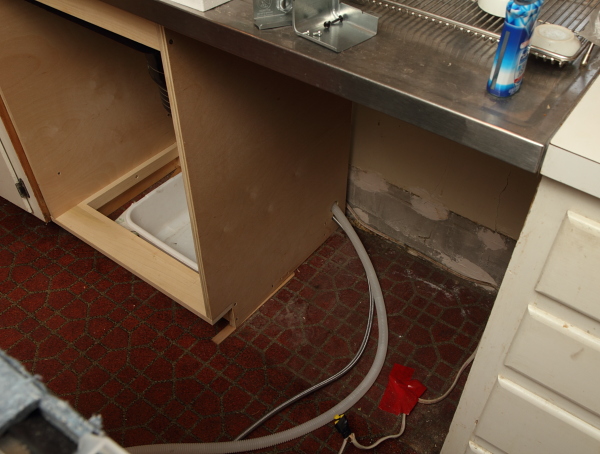 Because the counter is completely hollow--it is reinforced with two narrow longitudinal ribs underneath, but that's all--it was necessary to reinforce the front lip for strength and to have a mounting point for the new dishwasher. A 1.5" by 1.5" piece of poplar fit just fine.

(For those with sharp eyes and a knowledge of the electrical code: that little jury-rigged pigtail at the bottom was just a temporary setup to test the dishwasher before pushing it into place. It was well worth the peace of mind to see that everything worked without any leaks: I lost a joist in a previous house to a slow undetected dishwasher leak.)

I don't know that particular model, but several dishwashers that I've encountered have all been the same: open the door, and there are screws into the countertop (or possibly adjoining cabinets)at the front edge of the dishwasher cabinet. Remove the trim at the bottom, and you should be able to adjust the front legs of the dishwasher to lower it slightly to get clearance to slide it out. In most installations, the water supply, drain, and power connections are under the sink next to the DW and will need to be disconnected before you can slide it completely out.

Not the answer you're looking for? Browse other questions tagged removal dishwasher or ask your own question.

3
How do I remove the old plastic dishwasher water supply line connection near the shut off valve?
1
Dishwasher drain pump and circuitry diagnostics
0
dishwasher leak from bottom front middle upon start of cycle
0
Bosch dishwasher has water at bottom after using liquid soap
0
Removing side panel from dishwasher for part replacement - general advice
9
Help changing direct hard-wire to outlet for new dishwasher