I just installed a standard deadlatch, very much like this: 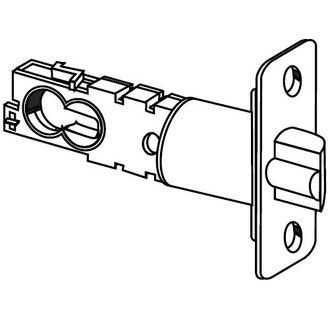 The problem is, it can be opened from the outside with a credit card.

Of course, a properly installed deadlatch should make this impossible. When the deadlatch is depressed, the latch should not be able to retract.

But when I hold the deadlatch down with my thumb and wiggle the latch, the latch eventually retracts.

It has nothing to do with how the strike plate is installed or positioned on the door. I can do it without ever involving the door or strike plate. I can just use my hands. It's very repeatable. Just hold the deadlatch down, press and wiggle the latch, and it retracts, every time.

Does this mean I have a faulty deadlatch? How could a deadlatch malfunction in this way?

UPDATE: I have to use a latching lock for this door. That's part of the users' requirements. So a deadbolt is not an option. Covering the gap between the door and frame might be a good idea for preventing the credit card move. However, what I'd really like to know is how a deadlatch could malfunction in this way to begin with.

If the strike bolt can be depressed by direct pressure when the small strike is not fully extended, then the lock is poorly made or broken. Replace it.

You should consider using a lock of higher quality. If this lock has failed, then perhaps all other instances of the same make and model are on the verge of failing. In any case, test the lock before installation.

If you really want to know the mechanical failure mode, you'll have to take the broken lock apart, and guess how it should have worked.

If you look close you'll notice two "strikes"...a big one and a small one, side-by-side. The small one keeps the big one from moving, when it's depressed.

What you should be looking for is a "Dead Bolt" lock. A dead bolt lock requires a key turn to secure the door from the outside. It can be secured from the inside either by rotating a knob or require a key. In either case the door will not lock without some intentional human intervention. They are not easily forced to the open position by credit cards, screwdrivers, slimjims, etc if they are properly secured. For safety reasons some local ordinances prohibit the use of double keyed (a key must be used to unlock even from the inside) dead bolts in homes.

Not the answer you're looking for? Browse other questions tagged doors lock security deadbolt or ask your own question.

9
Why does my latch not retract when I push or swing the door shut, but will retract when the knob/lever is used?
2
Installing a deadbolt on a door with a circular hole for the deadbolt location?
3
How can I remove the interior side of a Kwikset handle set with "interconnect"?
0
Is my doorknob handleset installed correctly?
2
How to remove strange looking strike plate
1
Adjusting deadlatch so it doesn't fall into strike pocket
5
Security door with lock guard
11
Do I need this special strike plate on my laundry room to garage entry? It's creating problems with a new lock