My office has a wall of closely spaced windows. I am looking to remove one window and replace with a swinging patio door. A 3'-0" door is easily framed inside this ~42" opening with a couple 2x4's to take up the slack. The catch is that I would like to have a light switch next to the door and there's just no room to fit anything.

This is a load bearing exterior wall. After poking a few small holes around the window I've concluded that each window was individually framed with it's own header, kings and jacks. This leaves maybe 1" of space between adjoining king studs. I drew up what I think I have behind the drywall: 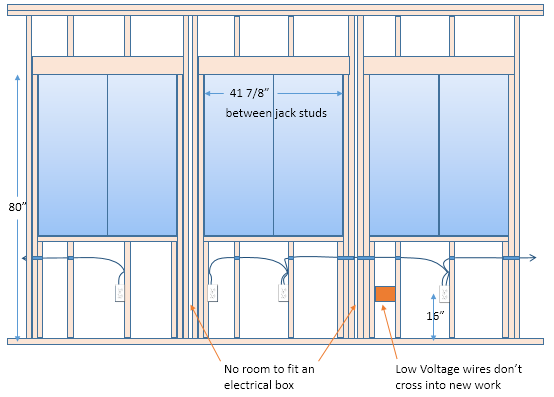 Am I correct in assuming there is no good way to cut into these king studs to fit an electrical box? The (unlicensed) engineer in me wants to assert that a strong metal box notched tightly between these kings would be quite strong but I'm guessing they don't make switch boxes designed to hold substantial loads and this would be a big no-no.

If this is correct then I think my only solution is to re-frame the door from scratch (i.e., remove all the dry wall between adjoining windows). By my calculation this would leave me with just over 3" between adjoining kings:

Here's what the re-framed solution would look like. I'm tapping into the circuit on the right because the one on the left has an open ground that I have yet to pin down and I want an exterior light fixture and a GFCI outlet installed. 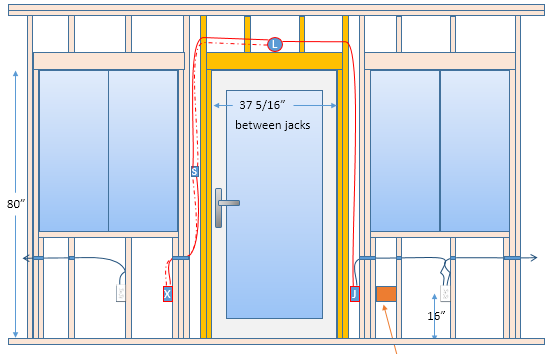 Any other ideas or suggestions?

I would re-frame the door opening, like you outlined, for several reasons:

You don't want stunted and fat door, it will look strange and not proportional, even if you can special-order door of these specific dimensions.

So, I suggest you buy (or at least know the exact dimensions of) your patio door first, and then frame the rough opening to accommodate it.

This is most probably a load-bearing wall... So, I'd also add a temporary stud in the center of the opening while replacing the existing studs on both sides.

3
What's the best way to lay out sheathing around a doorway?
1
4 King studs or 4 Jack studs
2
Is it possible to notch framing studs for installing conduit w/out structure collapsing?
0
Putting Doorway into Loadbearing Wall
1
Window framing gaps and split wood
2
How to frame a rough opening on an existing header?
4
Can I replace a window in a garage gable wall without adding a modern header?
0
Splicing wall plates at doors and windows?
4
What are the steps to raising an interior wall header?