Circa 2012, I bought an IKEA "Stockholm" LED floor lamp (product info). Its bulb recently burnt out.1 While the product was advertised as non-serviceable, I disassembled the lamp. The lamp's components seem straightforward, except for the heatsink.

The product features a large aluminum heatsink (approx. 3" diameter, 1.5" deep) around the LED bulb. (The lightbulb looks to be PAR16.) 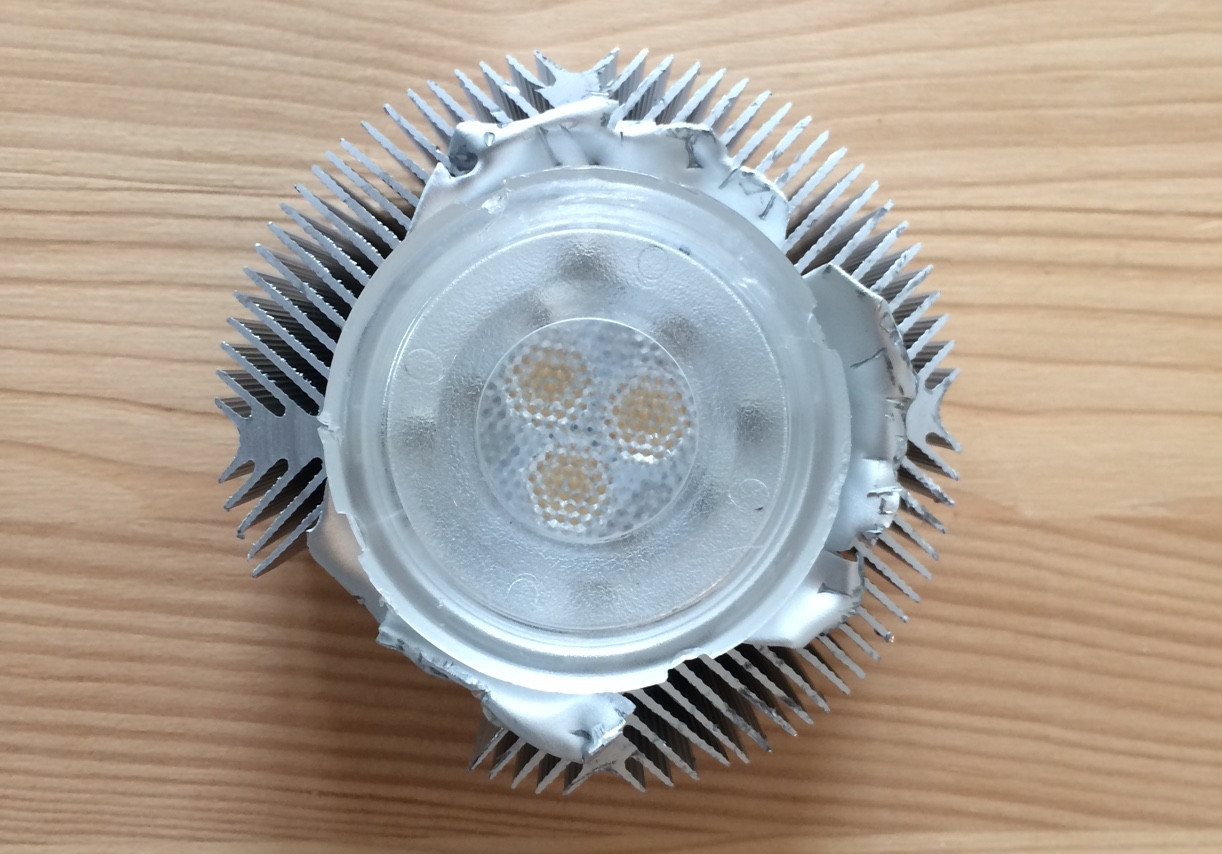 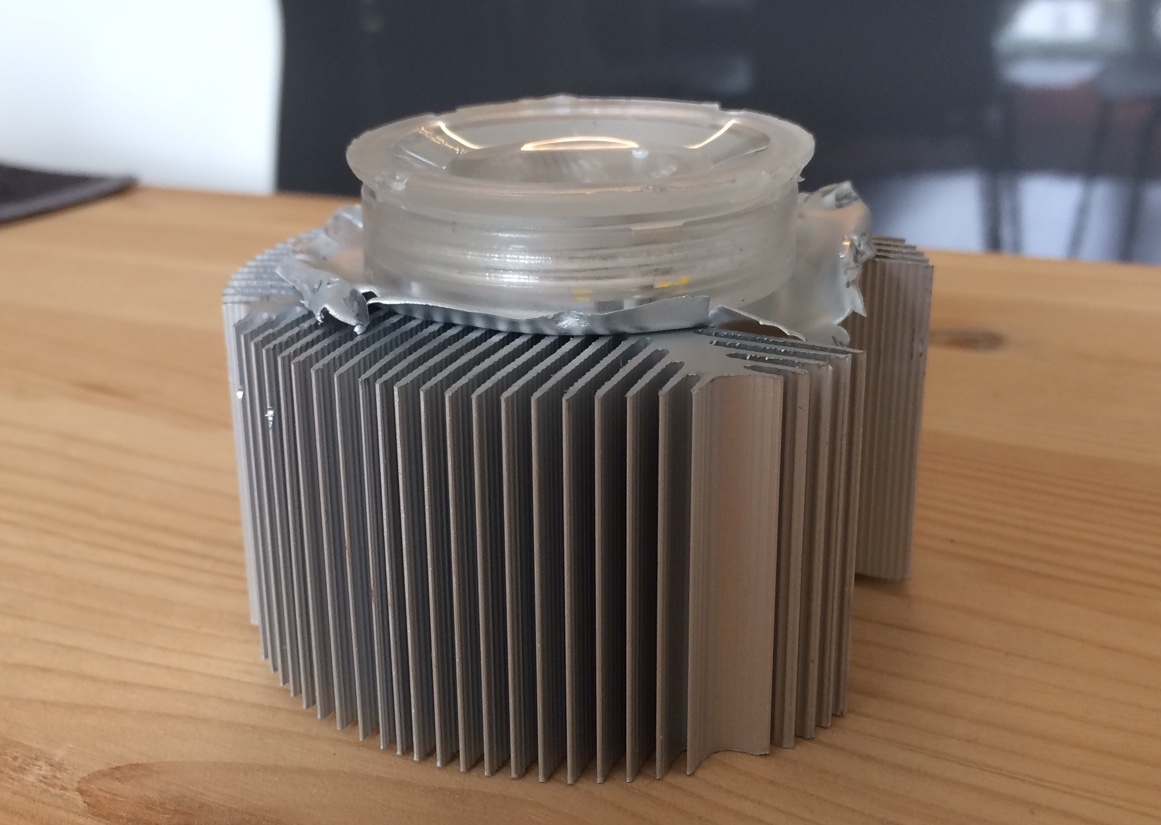 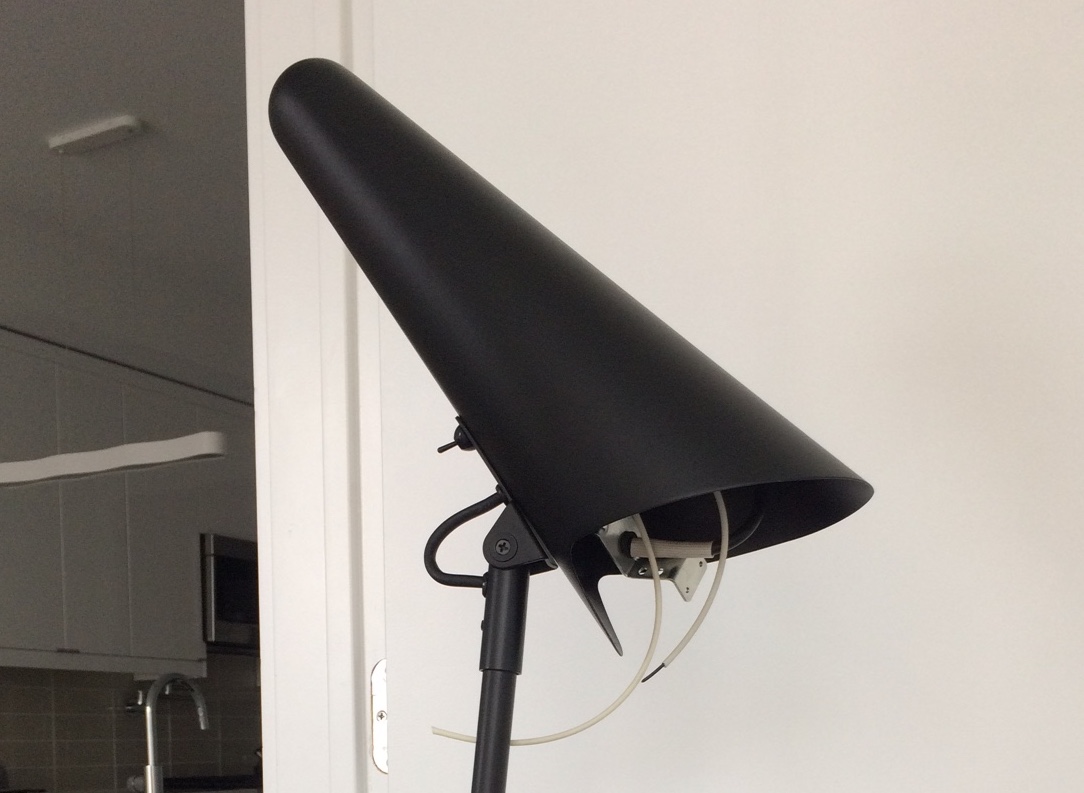 My question is: In repairing this lamp, do I need to replace the heatsink or do newer LED lightbulbs not require an external heatsink? The product's heatsink was glued (or otherwise permanently affixed) to the now-dead bulb, and it seems like I'll have a lot of trouble finding a replacement part.

1 While its light bulb was estimated to last 20,000 hours, I suspect it lasted less than a tenth of that.

Edit: Now you've posted more pictures, I see what you're doing. Let's take a look at your presumptions here:

All those presumptions are dead wrong with LEDs.

That is a packaged consumer product with a permanently mounted LED in it. It contains several components, including packaging, a power supply which converts AC into the constant-current the LEDs need, a beefy heat sink, the LED emitters proper, and lensing to direct the light.

LED emitters used for illumination make a lot of heat. Some is from the LED itself, and that is decided by how hard the LED is driven. Some is from the inherently inefficient phosphors which change blue light into spectral light.

LEDs are much more efficient than the old incandescents, but even so, almost all the watts of energy put into an LED emitter turns into heat, not light. That means the heat sink must be rated for the wattage of the LED. The LED wants to be kept as cool as possible, and the cooler it is kept, the better it will run. But you're still going to have a lot of heat.

There is basically no way an LED of any brightness is going to function for long without a heat sink.

So why do they fail?

Properly cooled, an LED emtter is likely to outlive all of us. If there's anywhere cheap builders will cut costs, it'll be in the power supply. This is the part which inputs 120/230V mains voltage and outputs a constant-current DC for the LED emitters proper. Capacitors are the most sensitive component - they ordinarily have a finite service life, and you have to go out of your way to spec the really good ones or spend a bit more on a capacitorless design. The top failure points are:

The LED emitter is rather unlikely to fail. What does this mean for fixture manufacturers? It means making LEDs removable is a waste of time and actually makes the product less reliable, because a socket problem is more likely than an LED emitter problem.

With the very concept of a "bulb" gone, it gives the manufacturer freedom to design fixtures as they please.

This means you were barking up the wrong tree when you took it apart trying to find the mystery replaceable bulb. There was probably nothing wrong with the emitters proper, unless they came unglued from the heat sink. Given the age, most likely it was a power supply problem. You could have tested for this with a voltmeter.

LED emitters (the chip inside the "bulb" product) are expensive, a common cost-cutting approach is to overdrive LEDs. The manufacturers fully expect this and spec the LEDs for this. For instance this Cree XP-G2 is rated at 1500ma but is specced at 350ma. Notice most of the charts assume 350ma, or assume 85C.

This unit (in R4 code, nominal 130lm) produces at 85C (and you can follow along on page 11, electrical characteristics and relative flux vs. current charts):

This assumes 85C. Go to page 10 and you can see exactly how cooler temperatures result in more light; 10% more at 25C, and 10% less at 125C. Now look at thermal design on page 13 and you'll see where the device requires a derate for high currents at high temperatures.

Lamp manufacturers balance the cost of more emitters (to run more efficiently) versus bigger heatsinks on fewer emitters. Generally they need a heatsink regardless, so making a somewhat bigger heat sink is the cheapest option.

That depends entirely on the "bulb" - given that you are basically rebuilding the "non-servicable" lamp, your bulb (or light source) choice will vary.

Observationally, despite its large size, evidence (the short lifespan) would suggest that the overall design of the lamp may not promote adequate cooling, since excessive heat is by far the major cause of short lifetimes for LED lamps and their drivers. Lack of airflow or other poor thermal design might have done this one in.

My overall experience is that "LED Bulbs" appear to generally give poorer service than LED fixtures designed for LEDs from the ground up. You might call this the worst of both worlds, as it's non-servicable (like most from the ground up designs) but uses a bulb-style light source. But if you are retrofitting with a "lightbulb" type LED, whatever heatsink it needs should be built into the bulb (which is a big reason bulb-types are compromised - "bulb shapes" often don't allow for adequate heatsinking.) You do need to allow for adequate airflow around the bulb (which is how a lot of LED bulbs get killed even if they are well designed - folks ignore the bit about not putting them in enclosed fixtures.)

Several of the newer designs have managed to reduce the waste heat and generally do better thermal management despite the constraints of the bulb shape - but I would suggest going for a "full sized" bulb if possible and going with a bulb. If you split it up into a driver and LEDs as separate entities, there are a few more options, but that's more of an electronics hobby than most folks care to tackle in a lamp repair.

You stated that the bulb looks to be PAR16 - assuming you are correct - which I am suspecting you might be as some manufacturers do utilize POTS components to produce a product - and looking at that crazy lamp I would say in your case is a good possibility - however I can not see all of it like you can.

You will need the Heat Sink in this case - the heat sink is additional cooling given the confined space of that lamp assembly. The "Glue" that holds it together is not a standard glue either - it is a special epoxy that allows for the conduction of heat to transfer.

Now if it is not a par 16 but a specially made unit - you would need to order the part from the manufacturer - they will most likely not sell just the lamp itself but also require the heatsink as I said the glue is not glue but special epoxy.

Hope that helps you.

Not the answer you're looking for? Browse other questions tagged electrical repair led bulb lamp or ask your own question.

4
Will switching to LED lightbulbs make a significant difference in my electric bill?
2
Is this really inductive/capacitive coupling, and is this remediation practical?
4
Can an LED Driver be mounted in a Ceiling Electrical box
1
Night Light Clip In Cord Incandescent to LED & Safety
1
LED Bulbs - Which Measure is the Best Indicator Of Efficiency
1
Hue (led) bulb does't turn on when put in certain lamps?
1
LED Light fitting has started making clicking sounds after power outage
27
Is this 230V steampunk metal robot lamp safe?
0
Do LED lights require a special dimmer switch?