How to estimate the load bearing of MDF plates on a wood/beam construction?

I have a 2000mm x 1400mm x 15 mm MDF panel (green) which I want to use on a to be constructed high plane for a bed and some space around. The depth should be 1600mm. The room is not rectangular which is why there's a width in the back (3150mm) and one in the front (2730mm). The construction should carry 600kg which seems sane for a bed and activities happening in it. The construction is made from wood (solid strucutre wood/german Konstruktionsvollholz).

I calculated the dimensions for the beams (red) to be 60mm x 200mm (to carry 300kg each over 3150mm) based on values from static tables. Now I'd like to know how to figure out the number of joists (pink) to support the MDF panel which depends on the load bearing of the MDF between the joists. The dimension of the joists/crossbars is 60mm x 100mm since that's the smallest normed dimension which I can obtain locally. The number should be minimal in order to save money (ca. 10 € per joist for me) and be just optimal.

My idea is that for n pink joists I can divide the capacity of 600kg by n and look a value up in a static table for the distance between joists for the MDF which I didn't find after a search engine search. I could then calculate the dimensions of the joists by dividing 600kg/n for the load balance of each joist and then search for a max. span value in the static table.

The space left of the MDF plate (supported by cyan joists) will be filled with OSB or MDF whose capacity I can then calculate based on the same recipe.

The connection between the red beams and pink joists is realized with shoes which aren't in the image. I assume they have no influence on the problem. The space between the cyan and red parts are based on my laziness in drawing/programming the image, they stand for matching connections.

The frame will be connected to wall/hold in position by the surrounding walls which can't bear loads, but will prevent any horizontal and diagonal movement. 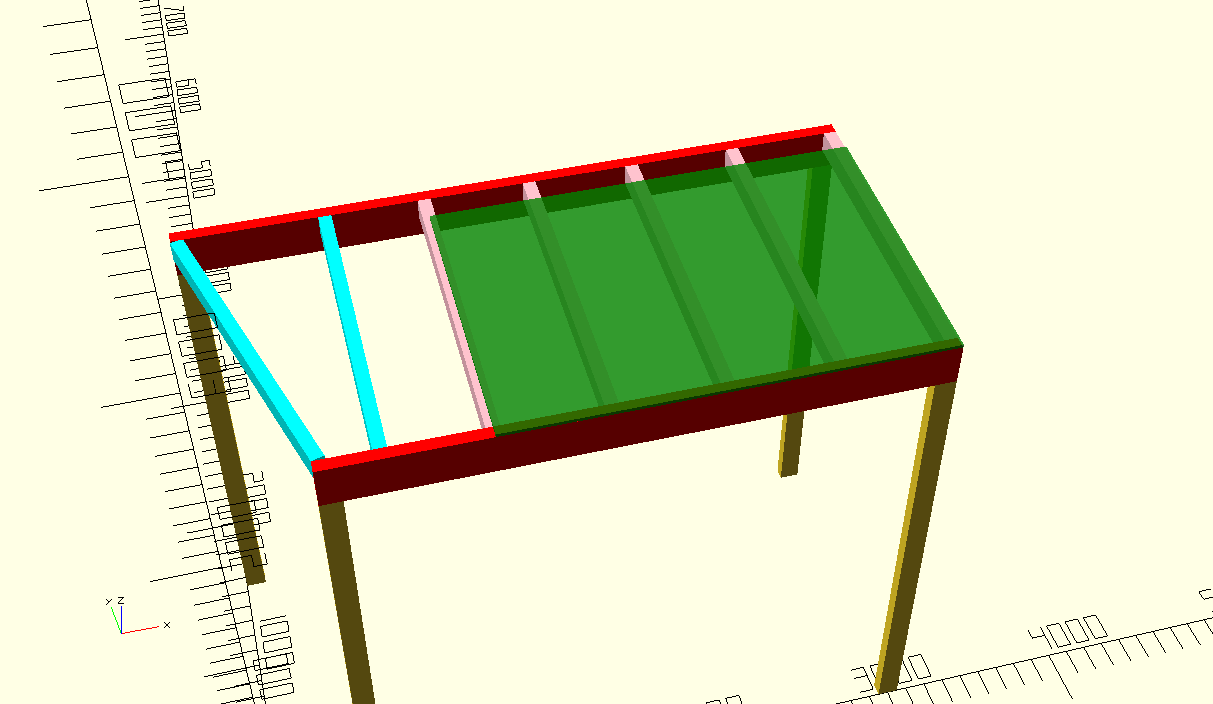 The deflection limit gives a proportional relationship between depth3 and span2. (I'll spare you the engineering equations unless you really care.) Assuming that 15mm MDF is still deflection-governed, and strength doesn't start to dominate, this gives a limiting span of 340mm.

2
Is there a standardized way of calculating load bearing of beams with connections notching the beam?

2
How big of a beam for a load bearing wall
1
Can I frame over an existing deck with a new deck to raise the level?
2
Does beam orientation matter for structural engineering calculation values from wood supplier tables?
2
Is there a standardized way of calculating load bearing of beams with connections notching the beam?
0
LVL Span Ratings and Beam Placement
0
Can I remove remaining studs below already installed load bearing beam?
1
Contractor cut joists short (followup to earlier question)
2
References to calculate lumber size and span for flat roof?