How to connect 2 water tanks at different levels with one pump?

Before now, the water flow was manually controlled by using Ball Valves but I want to automate it using Floating valves or whatever. If I install floating valves on both tanks, the problem will be solved but the pump will blow up.

The OP probably has long since satisfied his running water needs, but for anyone reading this later, here is a method to keep two tanks filled with the minimum of installed devices. The only active components required are the pump and two float switches. 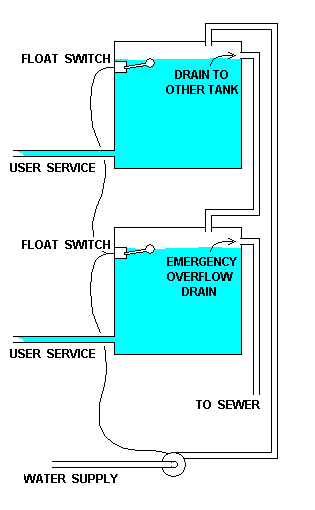 Each tank must have a float switch and an overflow drain near the top.

In each tank the float switch must be set to a level lower than, but close to, the drain level.

The switches must be set to run the pump when either water level drops.

The pump must be connected to the infill of the upper tank.

The overflow of the upper tank must be connected to the infill of the lower tank.

The overflow of the lower tank should lead to a sewer or waste line via a suitable water trap.

There is no possibility of the pump running against closed valves because no flow directing valves are required nor installed.

EDIT: Another poster has installed something like this and has discovered that his drain line does not empty the upper tank as quickly as the pump fills it. His upper tank overflows before his lower tank fills.

The best mitigation for this problem is to make the drain lines very large. Since a drain should begin to operate as soon as the water level reaches it, there is almost no pressure available to drive the flow. The drain pipes should look like drain pipes, not like fill pipes.

Another mitigation is to restrict the pump flow to something the drains can handle. Either use a smaller pump, or install a gate valve or globe valve in the fill line. (Do not use a ball valve, these are hard to adjust.)

In short, to avoid flooding, you can make the drain larger or make the fill smaller.

A third way to prevent flooding is to install a second float switch in each tank to serve as a safety switch. This switch must trip at a level above the drain, and well above the fill switch, but below the top of the tank. The pump must stop when either safety switch is raised. It will start again when the drain has caught up.

Not the answer you're looking for? Browse other questions tagged pipe valve pump water-tank or ask your own question.

1
Water pump and pipe size for maximum water intake?
1
My new pool pump has a high PSI and bubbles are in the water. How can I repair it?
0
How to Increase Pressure from Water Tank?
2
How to Fix this Water System?
0
How to connect two different height water tank on pump?
9
How can I pump water from our 2nd floor down to 1st floor drainage?