How to get a stuck Moen faucet cartridge out?

I have a single-lever Moen kitchen faucet that's 12 yrs old and I'm trying to replace the original cartridge. Moen sent a replacement cartridge (1225 B), that includes a removal tool. I've removed everything that is supposed to come apart up to this point, including the retaining clip that holds the cartridge in. The instructions at this point look like this:

The cartridge is completely circular, nothing keyed. It has O rings top and bottom to seal it. The removal tool is a plastic cap that fits around some wings in the top of the cartridge. You are supposed to use it to twist the body of the old cartridge. The only obvious purpose for this would be to sheer any built-up scale that might be stuck in the various openings, or just to generally loosen the body.

Inside the body of the cartridge, there is a stem that moves up and down for shut-off/flow volume, and rotates for hot/cold mix. Pulling up on the stem is supposed to pull out the cartridge.

The cartridge is frozen inside the faucet. The removal tool just deforms. I managed to turn the cartridge body maybe a few degrees and now it is stuck there. I tried using a metal tool to turn it without success, stopping short of enough pressure to damage the plastic cartridge.

I've used vise grips on the stem in the up position, tapping them up with a hammer. I've used enough force to knock off the vice grips but the cartridge body doesn't budge. I've also tried a small pry bar as a lever between the vice grips and the body of the faucet. Nothing budged, and I'm concerned that the cast metal body is too brittle, and that using the thin top rim for leverage is likely to break it.

There have been some other questions here about removing cartridges. A common theme is using WD-40 or CLR. Aside from the poisoning potential of WD-40, the cartridge is a very snug fit and O rings seal the area where scale could build up. So it isn't obvious how I could get enough to where it could count.

Any suggestions for extracting the old cartridge?

I have a Moen bathroom sink faucet Model Number 4570. It has been in place for about 25 years. I am the original owner. The cold water faucet finally failed and I ordered new parts from Moen (the cartridge plus various adapters and also their tool to aid in removing a cartridge nut. After removing the faucet handle and the cartridge nut, I then tried to extract the cartridge using needle nosed pliers as per the Moen instructions. After being in place for 25 years, it did not want to budge (not surprising).

I then looked on the internet to see if anyone else had experienced this problem and it looks like it has been a common problem. I read all the suggestions and tried putting vinegar on it to no avail. I was impressed with one proposal from an engineer in which he suggested attacking it from the underside by disconnecting the tubing and inserting a 5/8” rod and tapping it with a hammer.

I am 82 years old (also a retired engineer) and I did not feel like getting under the sink. I then tried to attack it from the top. I fashioned a loop out of some old pipe strap I had and I was able to attach the loop to the top of the cartridge with the screw that is used to attach the top extension to the cartridge. I then fashioned a lever arrangement using a block of wood and the lever that goes on my floor jack. See the attached photos. With this arrangement, the cartridge just popped out with very little effort.

Here is a photo of the Pipe Strap loop that I attached to the top of the cartridge. This photo shows the cartridge after extraction. 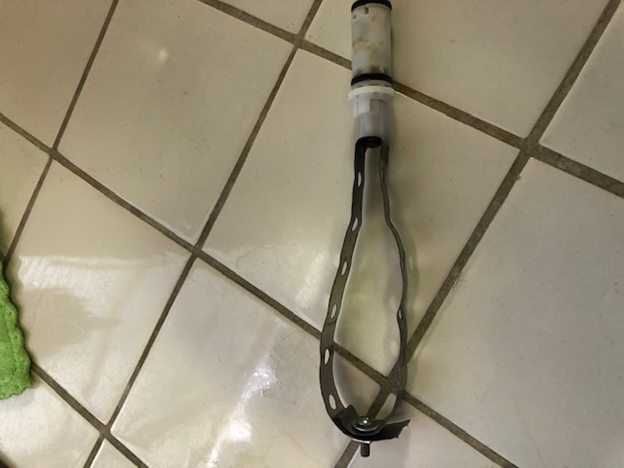 This photo shows the arrangement of the lever with the cartridge still in the housing. 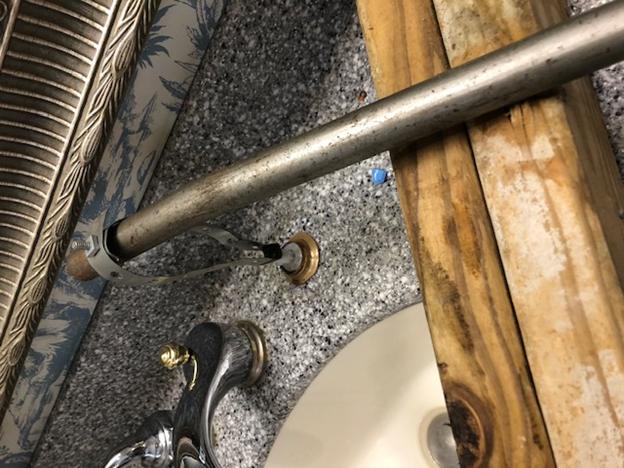 I added some extra silicone to the two “O” rings on the new cartridge and then inserted the cartridge and finished the job. The valve turns extremely easily – maybe I did not need the extra silicone. Moen was very helpful in sending the parts (at no charge since I was the original owner).

There is a cartridge removal tool you can use, I have never failed to get a cartridge out when resorting to it: 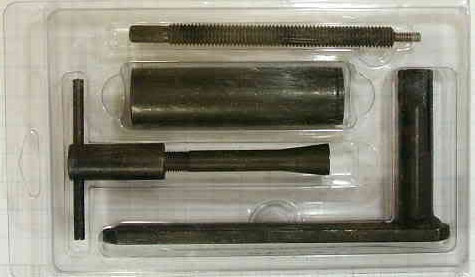 You can often borrow or rent this tool from a reputable plumbing shop (note importance of "plumbing shop", don't even waste your time at the big-box stores). There are other tools you will see, but they do not work as well as the one pictured.

Jimmy Fix-it's answer describes the right tool for the job. In my case, I didn't have access to a plumbing shop and needed to improvise. I came up with a low tech solution that I'll share in case it's useful to others with the same problem.

It appears that in general, removing these stubborn cartridges is a matter of applying brute force in a way that doesn't break anything. That comes down to finding an area on the faucet body that you can safely push against to apply a lot of upward pressure on the cartridge stem. In my case, after removing the outer shell of the faucet, the faucet body had a solid, wide shoulder about 1 1/2" from the top.

I took a scrap of 2x4 lumber and used a hole saw to cut a hole that allowed the board to slide over the body of the faucet and rest on the shoulder. I did the same with a 1x4 scrap that rested on top, allowing the extended stem to just reach the top of the upper board. The large hole is needed in the upper board because the cartridge needs a place to go when you pry it out.

The screw that goes into the cartridge stem to attach it to the handle assembly has a fairly wide head. I screwed that about half way in. Then I used a small pry bar, resting on the top board and hooked under the screw to pry up the cartridge.

This allows you to apply a lot of force without stressing the cast faucet body, any of the rest of the faucet assembly, or the counter it's mounted in. Once the prying action gets the cartridge to move a little, that breaks up what's locking it in place and it is easy to pull out with pliers.

My father had a hard time pulling the old cartridge coz it stucked and the inner cartridge was broken so there's no way to pull it out , we almost give up and plan to call a plumber to fix it . Last resort , my father used a chisel and hammer to break the cartridge into pieces and it works but you have to be careful not to damage the pipe to prevent leakage. We found out that the rubber on both side of the cartridge are severely adhered into the pipe. Thanks to my super handyman father and my husband who completed the job by inserting the cartridge properly !!! Thanks to Home Depot for providing the FREE lifetime warranty cartridge from MOEN . I saved lots $$$$$...

I had a badly stuck leaky cartridge just now. I got a good bite on it with channel locks, twisted it until it rotated a bit and levered it up with a block for a fulcrum. Since the old cartridge is a throwaway, just don't damage any part of the faucet you'll keep getting it out. Then replace the leaky cartridge with a new one and you're fine.

I just had same Moen experience. Position the ends of a good pair of needle-nose pliers on opposite ends of the upper and lower interior tabs. Using your vice grips, turn the needle-nose pliers in the direction which will turn the tabs @ 1/2 inch to the left or right. Remove pliers, do the reverse. This should loosen the interior tabs, so that you can now slowly turn and pull-out the stuck/encrusted housing. DO NOT PULL on the in and out flow valve! You will strip it out, and really complicate the job. Be patient, and work the needle nose pliers in both directions until you get your AHA moment.

Or you could remove the entire faucet, stick a Phillips screwdriver through the underside and tap the thing out.

I'm a plumber in Cincinnati Ohio I've used a cheap pump hair spray it eats the rubber gasket and frees up the cartridge. Just pull out what you can.

Not the answer you're looking for? Browse other questions tagged faucet replacement kitchen-sink cartridge or ask your own question.