I have washing machine down at the basement and pipe out the grey water with a pump over to the waste water drain. However, it appears that the water from kitchen sink just above the basement is shared the same path. So when my pump starts to pump water some of the water goes up the kitchen sink along with dirty stuff into the sink.

Should I put a check valve below the kitchen sink? would that help? or could I do to fix this issue?

The reverse is also an issue: it appears that water draining from the kitchen sink would go down to the drain, some water would always goes down to the pump which trigger the pump to come on and in turns pumps some water and junk back to kitchen sink.

I have actually since install a check valve in between the pump and the drain line. So at least now the water from kitchen sink would not overflow down to the pump which triggers it to pump back up again.

I also felt that there's a plumbing problem here. I'm not sure how to fix this. Drain seems to work because the water from washer would pump out eventually, some would always flow up to the kitchen sink along with junk, with the check valve installed now for the basement pump at least now the water from kitchen going down to the drain to basement would not overflow over to the pump now.

I attached a picture of the setup. (The very thin blue arrow indicate the diretion of water flow for check valve) The red check valve is the one I am thinking about adding. 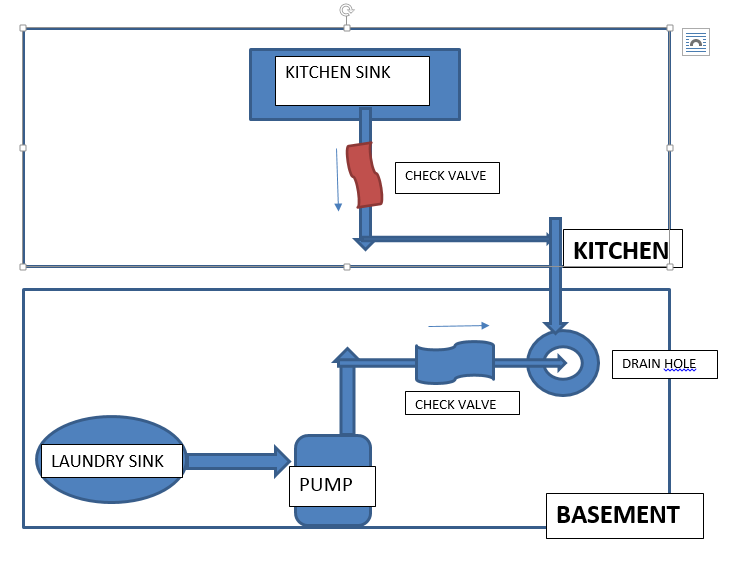 Browse other questions tagged plumbing water kitchen-sink laundry or ask your own question.