In my apartment we just got a new kitchen, and five minutes after the electrician left, i got a shock by touching the sink and the dishwasher et the same time. I got my multimeter and measuered the voltage difference between the two. I Measured it at 150 V AC.

The dishwasher and the oven is standing right next to each other, so i also measuered the voltage between the sink and the oven: 7 V AC. So pretty much no voltage across. Now, my lacking logic tells me that there must be a large voltage difference between my oven and my dishwasher. Atleast 143 V is my guess.

The thing is that there is not a large voltage differnce between the oven and dishwasher, but only a difference of 3 V.

Needless to say, i have no ground in my appartment.

Can anyone enlighten me?

My guess is there used to be a ground strap to the previous plumbing that was not replaced when the new, no doubt plastic, pipe was installed with the new sink.

Having said that, there must be a ground fault in one or the other.

Turn OFF the breaker to the stove and dishwasher and call an electrician ASAP.

It would appear that you have an issue with a neutral connection - your stove is probably not wired correctly. The Dishwasher is Generally 110V Earth Ground, Neutral and Hot. You should verify that those connections are correct - should be easy. [Black is Hot, White is Neutral, Copper or Green is Earth Ground. With the Stove on the other hand you can have a multitude of connections - 3 wire or 4 wire - if newer apartment - it should be 4 wire [Hot- Red, Hot - Black, Neutral- White, Ground Green] .

You should call the Electrician back out if you paid for this to be done.

I will add some pictures here - the pictures are from this link.

Verify your Dishwasher is correctly wired and you have.

Neutral, Ground about .7VAC or less (some difference from zero is expected). 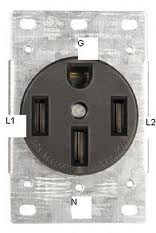 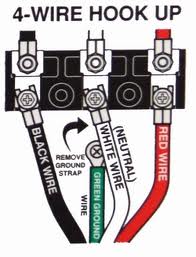 I don't know which country you're in, so I will go with French rules... which shouldn't be different from your own, since they're pretty much common sense.

First, assume the oven and/or dishwasher are live and do not touch them.

The sink can either be earthed with an explicit wire (mandated by law on new installations, since plumbing often uses plastic pipes now), or it could be earthed through metallic pipes, or not at all.

Recent law mandates all metallic surfaces to be earthed (this is useful if someone drops a powered kitchen mixer into a stainless sink full of water, for example) except of course metallic enclosure of double insulation appliances.

If you have copper pipes and they are not earthed, then any fault in your boiler or other electric appliance which is connected to the pipes can make the pipes go live, which is bad for your health if you're taking a shower or handling water.... or you touch a metal shower faucet, which would be the worst case.

Non-earthed copper pipes mean any faulty appliance/boiler where wires come loose and touch the pipes anywhere (even somewhere else in the entire appartment complex if all the pipes are metal) will kill you dead when you turn the shower faucet, it is no joke.

Locate a mains outlet with a earth pin, and test continuity of earth between this earth pin and your sink, then copper pipes. The tester should ring.

Turn off your main circuit breaker and test continuity of earth between a earth pin in a socket and the metallic chassis of your oven and dishwasher.

The tester should beep in all cases.

If it does not, one of the appliances is faulty.

Now, unplug the faulty one, and flip the main circuit breaker back on to have some light.

If the electric installation is old or wasn't done by pros, some sockets could have missing earths (I saw this happen) or even worse, the entire appartment's earth could be connected to nothing at all. If you are paranoid, you can test all earth pins in all sockets... and ask the electrician to check in your main electrical panel that the earth actually goes somewhere...

Where are you located? That's illegal here and pretty much everywhere else...

If you don't have earth in your flat, then it is deadly to use any Class-1 appliance (those which need a earthed socket). Which means pretty much everything. Those appliances have a earthed chassis. So when some water leaks into your dishwasher and short circuits between the wires and the chassis, current goes into earth and trips the RCD breaker. Without earth/earth, current goes into you when you touch it.

I am sorry that i haven't been answering before now, but i thought the question was deleted (it was only moved). Sorry for that.

I got an electrician out. He fixed it. He made ground to the dishwasher, i do not know how.

And thank you for good answers, i now have a better understanding of the equipments.

8
Insufficient voltage to dryer receptacle; what next?
4
How can I diagnose disturbing voltage potentials?
7
Getting shocked by a neutral wire
2
Why doesn't my dishwasher power on?
6
Why is voltage detected in my ceramic tile floor?
1
Just recently started getting shocked in the shower
1
Electrical shutters crash computer connected to same power line
0
Electricity for light let 1V go
0
Voltage between neutral line and soil?