Furniture pads for furniture legs…always comes off, how to remedy this?

HOWEVER, they all seem to start to slide off and eventually need to be replaced.

Is there a better way to apply them or to permanently attach them?

I can probably take a small nail and nail them to the bottom of the legs, but then I'm concerned that eventually the pads will wear down and the nail heads will scratch the floor.

Are there other products out there that are more permanent? I've seen the plastic feet with a pin, but I would prefer something softer as I think that the plastic will scratch the floors.

There are nail-on glides that have a carpet bottom. 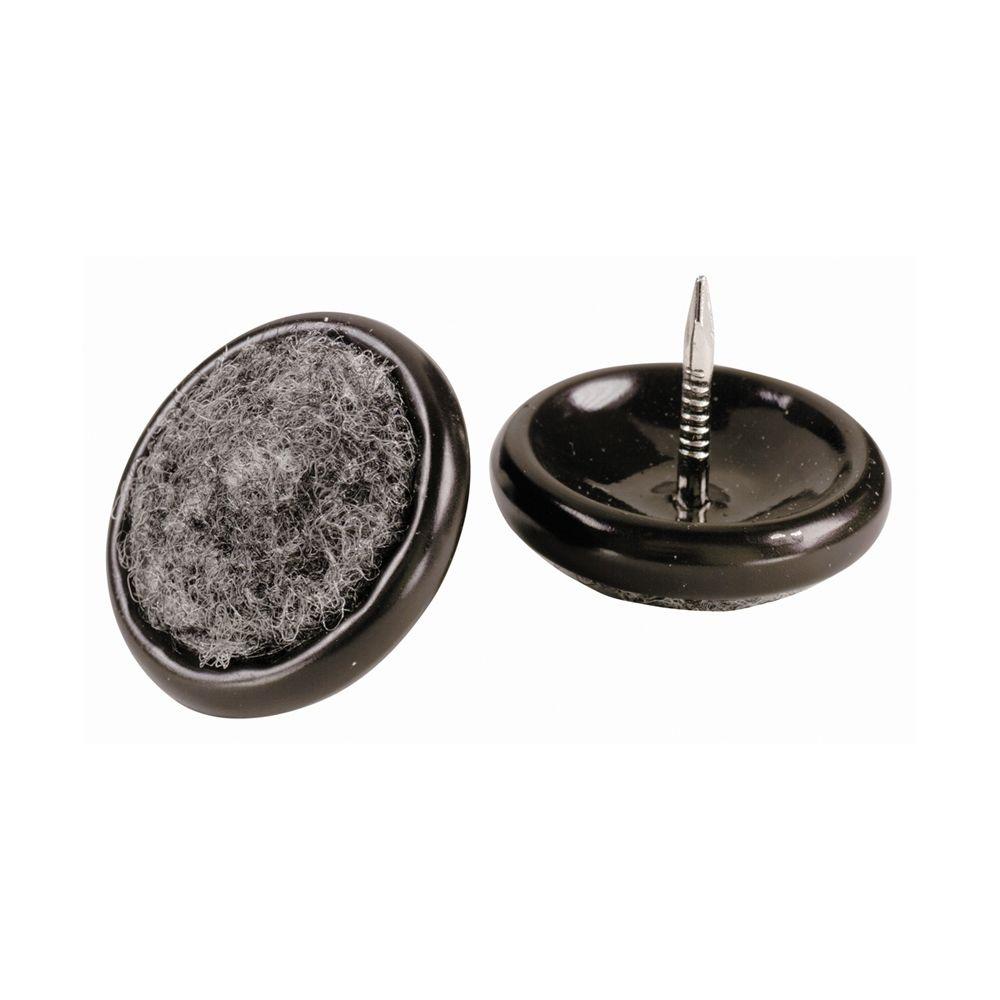 They also come in a swivel version in case your legs have a significant angle. 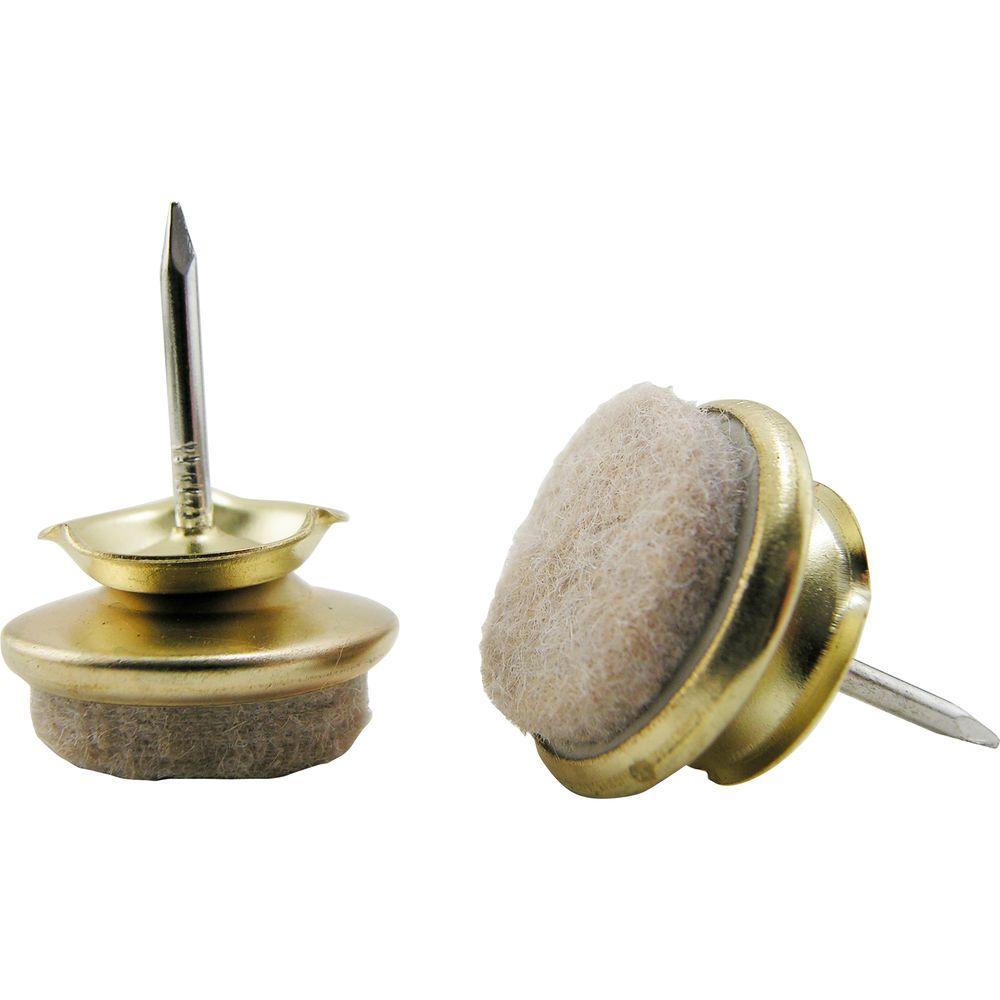 Images and links are illustrative only, not an endorsement of goods or sources

I think your concern about the damage potential from using small nails to hold felt pads is entirely warranted. I thought about and rejected this means of holding felt pads on. We have not wood but ceramic tile throughout our one-story slab-on-grade. I have thought about this problem of how to pad the bottoms of wooden chair legs and failed to come up with a better solution than stick-on felt pads.

I want to go without pads, and would try it, but my wife is opposed. She doesn't like a loud squeak when a chair or footstool is slid along the floor. She has been buying quality "Amish" furniture to replace some worn out 50-year-old furniture and the company puts the felt pads on when they deliver. We have a 40-year-old "roll arm" Kling lounging chair (in pine so relatively light) and it has no pads and works fine. I don't know how well wood terminations would work on hardwood flooring, but I would be willing to try it on a limited basis to see if scratches result.

We have a natural xeriscape yard with a front walk of sandstone flags in a bed of crushed granite (so called "decomposed" granite). The granite particles are sharp edged, and find their way into the house and under chair legs where they get embedded in the felt pads. I think they would readily and deeply scratch a wooden floor, but our ceramic tile is so far unaffected. Whenever I detect one by sound on sliding I tilt the chair over and remove it by hand.

Also dog hairs collect on the felt pads and I have to regularly pull them off by hand. This is from one 15-lb long haired terrier; I can't imagine the result of two or three large shedding dogs.

The felt on these pads is, I believe, polyester like the fuzz on modern tennis balls. I believe this is abrasive to softer materials like finished hardwood floors. We adopted a large, stray, mature border collie loose in the neighborhood who was obsessed with tennis balls. The upper and lower canines were worn at a strange angle which a dog expert told me was abrasion from squeezing tennis balls. This expert said dogs should never be allowed to mouth tennis balls as it will wear their teeth down. I think felt furniture pads on chairs might be causing a lot of wear on wood floors.

I've had similar experience with stick-on pads coming off. I tried nail-on pads and had some break (the pad just broke off the nail head), so I guess those depend on the quality of the particular one you buy. The ones shown in bib's answer look like much better quality than what I tried, which was basically just a plastic disk molded onto a nail.

I finally settled on screw-on "Magic Sliders" because I liked other products of theirs I had tried (you can find them at most big retailers, like Home Depot, probably Amazon):

These work on any kind of floor surface. I've found them to not mark hardwood floors (reviews for some other brands of similar design claim the other brands mark hardwood, so they may be a different type of plastic). Mine have been in use for several years and the glide surface is still smooth (if the plastic were to abrade and get rough, the glides would be likely to scratch the floor). Jim Stewart's answer mentions the problem of abrasive debris getting trapped in carpet-style glides. That isn't generally an issue with plastic-tipped glides.

They come in different diameters. Get the largest diameter that fits the leg, which will provide the most surface area, so the least tendency to leave a mark.

They do require drilling a pilot hole, but a screw provides a lot more strength than a nail.

One other style should be an improvement over stick-ons and are inexpensive. They generally look like this: 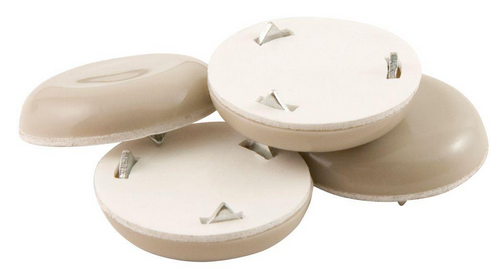 This particular one is from Home Depot and got mixed reviews (claimed the plastic scratched hardwood floors). I've never tried this style and can't recommend a particular one. This style has an adhesive backing, plus some tiny spikes. You tap it on to embed the spikes. The spikes keep the pad from sliding on the leg, which is what destroys the adhesive on adhesive-only pads. If you can find one with good reviews, they're essentially as easy to install as adhesive-only pads.

Not the answer you're looking for? Browse other questions tagged hardwood-floor furniture or ask your own question.

1
How to easily clean up or refinish cheap top coat on hardwood?
7
Will frequent sliding while wearing socks cause noticeable wear and tear on hardwood floors over time?
0
Can someone inform me on how to achieve this type of patina on a furniture project I am working on
2
Chair felt pads that stay on
0
Why my engineered hardwood floor is chipping/worn (abuse or regular wear?)
0
Installing Pre-Finished Hardwood on Stairs - How to Avoid Shortening Tread Length
0
How to get sticky residue off plastic-covered furniture?
0
what should I use to cover a table made out of a broken bookcase?